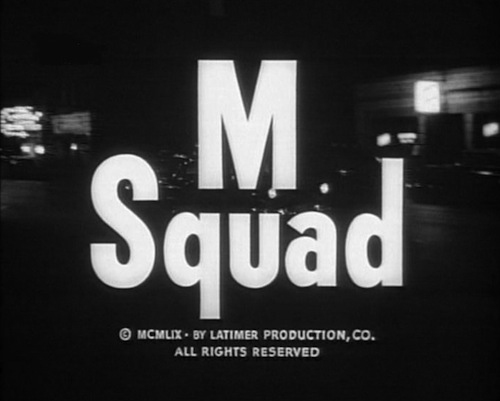 Lee Marvin was an established heavy before taking on M Squad, thanks to memorable turns in solid pictures like The Wild One, The Big Heat (both 1953), Violent Saturday (1955) and Seven Men From Now (1956). And while he was sick of doing the show by its second season, it helped him make the transition from bad guys to leads.

The show follows Lieutenant Frank Ballinger (Marvin) of M Squad, “a special detail of the Chicago police.” Each week, Ballinger tackles a different type of case — murder, corruption, organized crime, etc. — depending on where he’s assigned. It’s a pretty slick way to set up a cop show, avoiding the “another week, another murder” setup that can get stale. That, along with narration by Marvin covering the points they don’t have the time or money to show, makes it seem a bit like Dragnet on the surface. But the resemblances end there. M Squad hops the line between a strict procedural and an attempt to channel Mickey Spillane (which was happening with Darin McGavin at the same time on Mike Hammer).

What sets M Squad apart is, of course, Lee Marvin. Whether he’s shooting a nut-job killer, slapping a mobster around or chatting with a female witness, he adds his own brutal energy, as he did to just about everything he did. As Ballinger, Marvin may be on the right side of the law here, but’s he as unhinged and violent at times as, say, Liberty Valance. And the show is better for it.

TV of the 50s is a great place to follow the work of some of genre filmmaking’s greatest actors and directors. Some saw the small screen as slumming, others just saw it as work. William Witney, John Brahm and Earl Bellamy were among the veteran directors who worked on the show. It also provided fairly early credits to Don Taylor, Boris Sagal and Robert Altman. But no matter who’s at the helm, the show has a stripped-down, claustrophobic noir aesthetic, helped along by some real heavyweights in charge of the cinematography: Ray Rennehan, William A. Sickner, Lionel Lindon and Bert Glennon, to name just a few.

The point here is that Marvin, who was one of the producers of the show, made sure he was surrounded by top talent. He may not have liked the rigors of a weekly TV series, but he made sure he did it right. With so much talent on both sides of the camera, how could it not be great?

Timeless Media Group gives us all 117 episodes of M Squad, in order, spread over 16 DVDs, with a bonus disc of various Marvin TV appearances. The quality varies from episode to episode. Most look fine, some are pretty rough. But the show’s so good and Marvin’s so cool, quality becomes secondary to having the show’s entire run.

This is essential stuff.

M Squad earned an odd footnote as one of the inspirations for the Police Squad and The Naked Gun TV and movie franchise starring Leslie Nielson. The music and opening credits for Police Squad are clearly patterned after M Squad. (M Squad does not feature a “hunchback at the office.”)