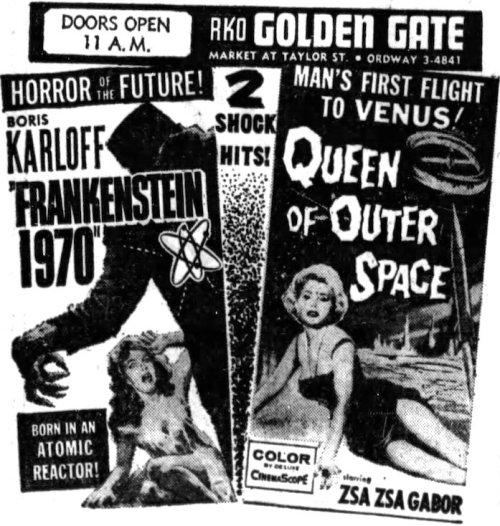 Some movies are labelled art, others are considered simply entertainment. A select few can actually be both, while unfortunately, some are neither. While film critics and scholars like to decide what falls into which category, we all get to call ’em as they see ’em. For me, Queen Of Outer Space (1958) — which is a real hoot, is a helluva lot better movie than, say, The English Patient (1996).

A team of astronauts, led by Eric Fleming of Rawhide, is drawn to Venus, where they find the planet populated by beautiful women in miniskirts with ray guns — except for a few who wear masks to cover ghastly radiation burns. Zsa Zsa Gabor plays a Venusian scientist — and the only human on the planet with a Hungarian accent. All that, plus a giant rubber spider.

It all started with a 10-page story idea (called Queen Of The Universe) by the great screenwriter Ben Hecht. It had been sitting around Allied Artists for a few years when Ben Schwalb, who was producing The Bowery Boys movies, ended up with it. He handed it off to writer Charles Beaumont. Beaumont’s script was then fiddled with by Ellwood Ullman, who’d written for The Three Stooges. Edward Bernds, another Stooge veteran, directed — just as he’d done with AA’s previous sci-fi picture, World Without End (1956).

Don’t let the DeLuxe color and CinemaScope fool you — Queen Of Outer Space is a pretty cheap affair. You might recognize the spacemen’s uniforms and some of the ladies’ costumes from Forbidden Planet (1956). There are models, sets and footage from World Without End (1956) — which featured rocket footage lifted from Flight To Mars (1951). And the rubber spider is the same one seen in World Without End (1956). 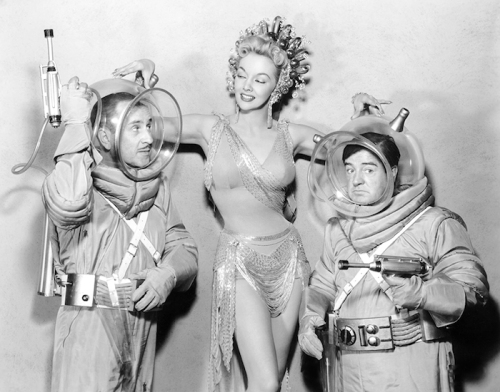 Bud and Lou with Mari Blanchard

Of course, others had boldly gone after the planet-of-women plot-line before. Take a look at Abbott & Costello Go To Mars (1953, above), Cat-Women Of The Moon (1953) and Fire Maidens From Outer Space (1955). But with Queen Of Outer Space, they got the mix of chicks, chills and cheese just right. (Okay, I’m stretching it a bit with the chills part.)

Speaking of just right, the Warner Archive Blu-Ray is a great example of bringing an old movie to high-definition. It’s sharp as a tack, with the color dialed in perfectly. This is maybe the best-looking DeLuxe color I’ve seen on Blu-Ray — and a big improvement over the nice-looking DVD. The audio is clean. And the commentary from that DVD has been retained.

For some of us, and we know who we are, owning this is an absolute necessity. For others, it’s a complete waste of time, money and pixels. If you’re in the former group, you won’t be disappointed.

One last thing: In some lucky cities, Queen Of Outer Space was paired with Howard W. Koch’s Frankenstein 1970 (1958). Those were the days.