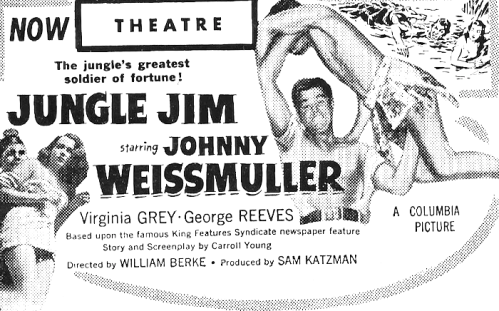 After 16 years and 12 movies (six for MGM, six for RKO), Johnny Weissmuller’s days are Tarzan came to an end with Tarzan And The Mermaids (1948). (It was a troubled production, shot in Mexico, well worth reading up on sometime.)

That same year, Sam Katzman came along to offer Weissmuller the part of Jungle Jim, a big game hunter featured in Alex Raymond’s comic strip. It was perfect for the former Olympic swimmer, now middle aged — a chance to trade his loin cloth for khakis. Jungle Jim had already hit the screen as a 1937 serial from Universal (there was a radio show, too). Katzman had in mind a series of short, characteristically cheap features for Columbia. He’d recently added features to his duties at the studio; he’d been in charge of their serials since ’45.

In this first picture, called simply Jungle Jim (1948), Weissmuller is hired to help Dr. Hilary Parker (Virginia Grey), a medical researcher, find the source of a rare poison that might point the way to a cure for polio. Bruce Edwards (George Reeves) comes along as a photographer. Jim brings along Kolu (Rick Vallin) and his sister Zia (Lita Baron). As they make their way through the jungle to the temple of Zimbalu and its “devil doctors,” they tackle a crocodile, elephants, a lion and more — including the “devil doctors.” And it turns out George Reeves would rather take the treasures of Zimbalu than take pictures of them.

Virginia Grey had been in Tarzan’s New York Adventure (1942) with Weissmuller. George Reeves was still a few years way from playing Superman. And Lita Baron was Mrs. Rory Calhoun at the time. Of course, Weissmuller gets plenty of chances to swim, and he’s still incredible in the water.

Director William Berke started out writing silent Westerns. He became a prolific B director, cranking out tons of movies and TV shows before having a heart attack on the set of his last film, The Lost Missile (1958). He was only 54. Berke directed several of the Jungle Jim movies, along with Robin Hood Of The Range (1943), Dick Tracy (1945) and Cop Hater (1958).

Carroll Young had written some of the later Tarzan pictures and hopped right into the Jungle Jim series. He also wrote a couple of the better Regalscope pictures, She Devil and Apache Warrior (both 1957).

Jungle Jim was successful enough to spawn 15 more films (1948-1955) and a single-season TV show. Weissmuller would retire after the last one, Devil Goddess (1955), and the series.

The movies are as fun as they are dumb. I love them, even though Weissmuller can’t act and you see the same elephant, monkey and crocodile footage over and over and over. This first one is available in Volume 1 of the three-volume set from Umbrella out of Australia. It looks nice. If you know these films, I don’t need to recommend them — you know what you’re getting into.