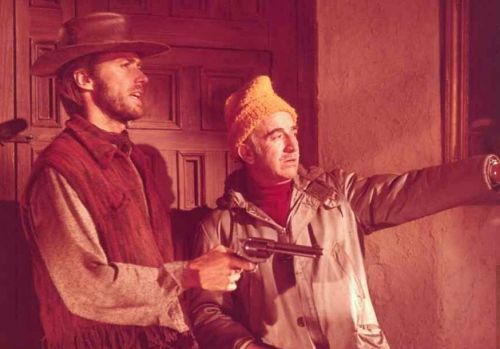 Don Siegel’s films are scattered throughout my list of all-time favorites — if I was to ever sit down and make such a list. Here are some photos I’ve come across while researching him for various things (some of these images have appeared on this blog before, but are worth repeating).

Up top, there’s Siegel directing Clint Eastwood in Two Mules For Sister Sara (1970). The original screenplay was by Budd Boetticher, who was supposed to direct (he ended up with only a story credit). Budd not happy with the finished film, which co-starred Shirley MacLaine. The Los Angeles Herald-Examiner called the picture “a solidly entertaining film that provides Clint Eastwood with his best, most substantial role to date; in it he is far better than he has ever been. In director Don Siegel, Eastwood has found what John Wayne found in John Ford and what Gary Cooper found in Frank Capra.” They’d make five movies together. 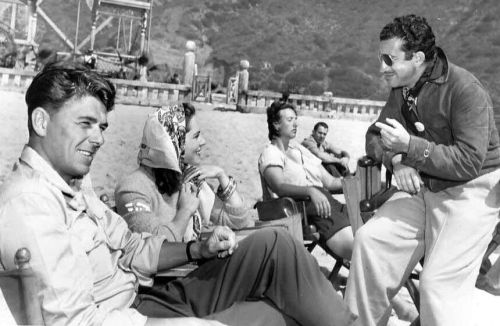 Here he is with Ronald Reagan and Vinveca Lindfors (Mrs. Siegel at the time) shooting Night Unto Night (1949). 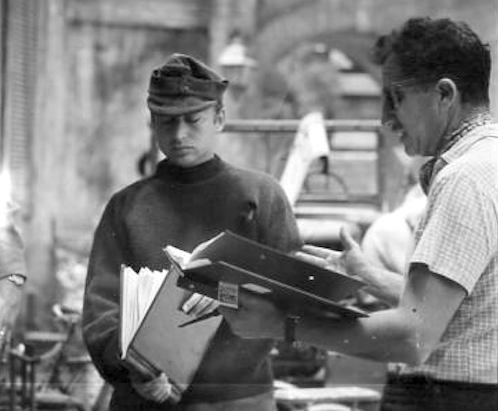 Nick Adams and Siegel go over the script for Hell Is For Heroes (1962).

Siegel, Angie Dickinson, Claude Akins and John Cassavettes (back of his head) on the set of The Killers (1964).

With Eastwood on the set of Coogan’s Bluff (1968), their first picture together.

Andy Robinson goes over the script with Siegel on Dirty Harry (1971). 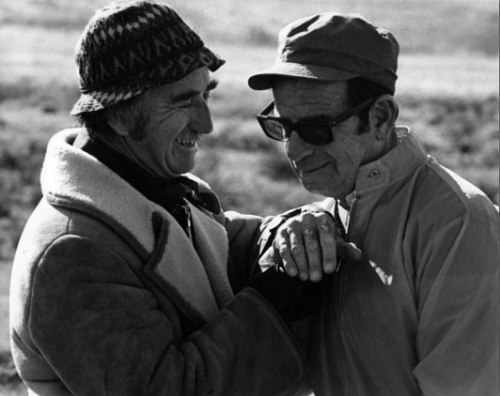 Siegel and Walter Matthau having a laugh on Charley Varrick (1973). I think Don’s wearing the same hat he has on in the photo from The Killers.

Eastwood and Siegel on location for Escape From Alcatraz (1979).

I was trying to find a picture of Siegel working on Baby Face Nelson (1957), one of his best, but had no luck. It’s highly underrated, probably because it’s almost impossible to see.

Screenbound in the UK has announced a cool Blu-Ray set: The Films Of Michael Reeves. Many see Reeves’ death at just 25 as a huge blow to British cinema. His last film, Witchfinder General (1968, AKA The Conqueror Worm in the States), was terrific and showed that he had incredible potential.

From the press release: “This ultimate Blu-Ray collection includes both of his iconic works (Witchfinder General and 1967’s The Sorcerers), along with the first-ever Blu-Ray release of The Castle Of The Living Dead, where he was part of the scriptwriting team… completing this stunning collection is the brand new feature-length documentary The Young General, featuring Ian Ogilvy.”

Reeves’ The She-Beast (1966) is already available on Blu-Ray

Douglas Trumbull, the special effects genius/inventor/director has passed away at 79. You can seen him up top working on Stanley Kubrick’s 2001: a space odyssey (1968), building the moon bus model.

Yvette Mimieux has passed away, just a week after her 80th birthday.

She’s best known for her first feature, The Time Machine (1960, above). She played Weena, one of the Eloi, the folks Rod Taylor comes across when he travels to October 12,802,701.

But for me, I’ll always remember her for another picture with Rod Taylor, Dark Of The Sun (1968). It’s really something, and she’s very good in it. 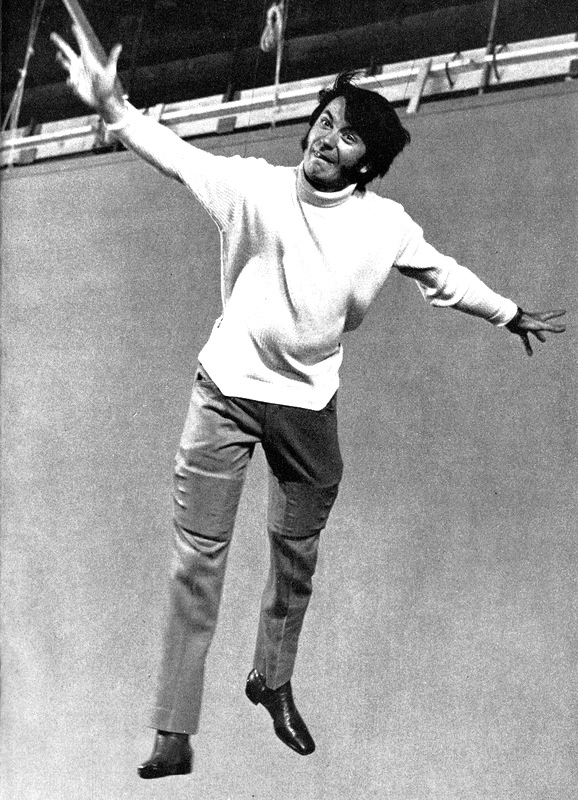 Mike Nesmith of The Monkees passed away Friday at 78. He’s seen above hard at work on their 1968 theatrical film Head (chosen to make this post appropriate for a movie blog).

Nesmith never really got his due for being the innovator that he was. He was one of the first to play around with the “country rock” thing in the late 60s. His LPs with his post-Monkees group The First National Band (Magnetic South, Loose Salute and Nevada Fighter) are terrific. (In fact, most of the songs he wrote for the Monkees show a clear country influence.)

Hearing those First National Band records for the first time was a huge deal for me — a big thanks to the guy at Finest Records in Greeley, Colorado, who gave me a cassette of Magnetic South and Loose Salute back in 1985. Can’t remember your name, my friend, but I’ll never forget popping that tape into the dashboard on the way home!

In the early 80s, Nesmith played around with the music video idea before there was an MTV. In both of these cases, country rock and music video, Mike paved the way and others enjoyed the success.

Thanks for everything, Mike — and save the Texas prairie chicken!

Corruption (1968) is a weird one, placing Peter Cushing in the swinging London of 1967, up to the nasty business we’re accustomed to him doing in a more Gothic setting. His fiancee (the terrific Sue Lloyd) is scarred and Cushing goes about all sorts of butchery to set things right. It was seen as rather lurid and gory back in the day, and it’s still a bit jarring to see Mr. Cushing involved in something like this (which Columbia slapped a “Suggested For Mature Audiences” banner on).

Indicator/Powerhouse Films is bringing Corruption to Blu-Ray in August, giving us two versions of the film — the 92-minute theatrical version and the more graphic international one. They’re also piling on the extras: commentary, interviews, trailers, TV and radio spots, galleries and more.

A good friend mentioned this the other day, that they saw this in the theater as a kid. This Blu-Ray sounds pretty exhaustive and definitive. Recommended, as is anything Peter Cushing touched.

Mill Creek has announced the May Blu-Ray release of The Hellfighters (1968) Based (at least in part) on oil well firefighter Red Adair, it’s a pretty good later John Wayne movie (watch for something on 1974’s McQ in the next day or so).

This has always looked good on laserdisc or DVD, so I imagine the Blu-Ray will look terrific.

I’m reading the delightful, insightful book Time Between by Chris Hillman of The Hillmen, The Byrds, The Flying Burrito Brothers, The Desert Rose Band and other bands.

In an early chapter, Hillman covers growing up in San Diego County and the old movie director John Robertson who lived nearby. He and his wife Josephine, a screenwriter, became the inspiration for the song “Old John Robertson” on The Byrds’ The Notorious Byrd Brothers LP from 1968. (A different version had been the B-side to the 1967 “Lady Friend” single.)

Robertson directed a number of silent films, with his biggest being the silent Dr. Jekyll And Mr. Hyde (1920) starring John Barrymore. One of his later pictures was Little Orphan Annie (1932). In the 50s, when Hillman and his friends encountered him, he was still dressing the part of a silent movie director, complete with jodhpurs and a handlebar mustache.

Walking slow with old John’s
Crippled wife by his side
Then she sighed, then she died

All in vain was no game
For he’d lost an old friend
In the end, in the end

Robertson passed away in 1964, so he was never aware that he’d been immortalized in song by one of the local kids. Shame, it’s a wonderful song — on a terrific album. Of course, Mr. Hillman is a national treasure. 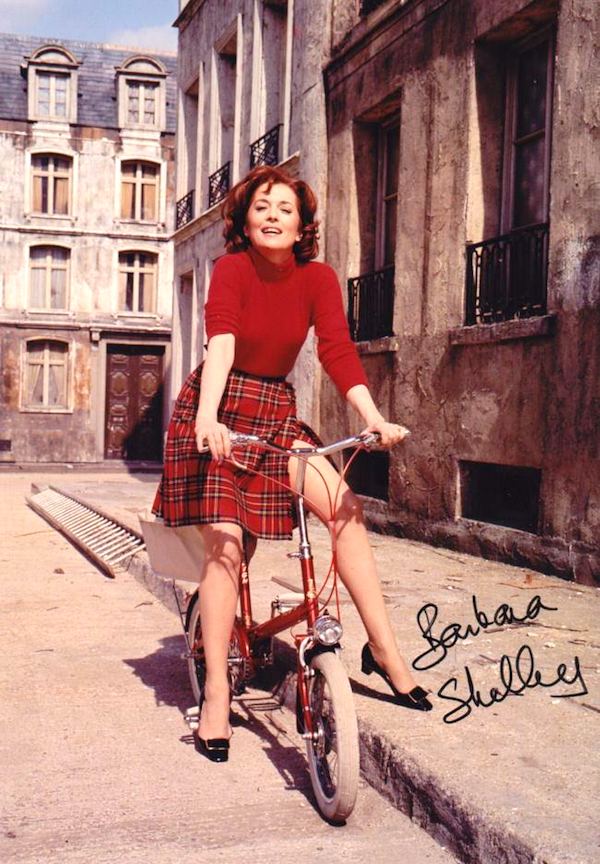 I grew up watching Barbara Shelley in pictures like Dracula – Prince Of Darkness (1966) and Quatermass And The Pit (1968). She was always terrific. She passed away today at 88.

Miss Shelley was one of those actors or actresses that didn’t look down on material like this, and her performances were as good as the genre ever saw. I’d have a real hard time picking a favorite — so I guess I’d recommend you watch ’em all. Which is what I plan to do.

Targets tells the stories of a troubled young man with a thing for guns (Tim O’Kelly) and an aging horror film star (Boris Karloff). O’Kelly’s character is based on Charles Whitman, who shot a bunch of people from the tower at the University Of Texas in Austin in 1966. Karloff’s character is based on, well, Boris Karloff. The movie gets creepier, and more topical, as time goes on. It also illustrates the shift from Gothic horror to more contemporary horror in a very literal way. 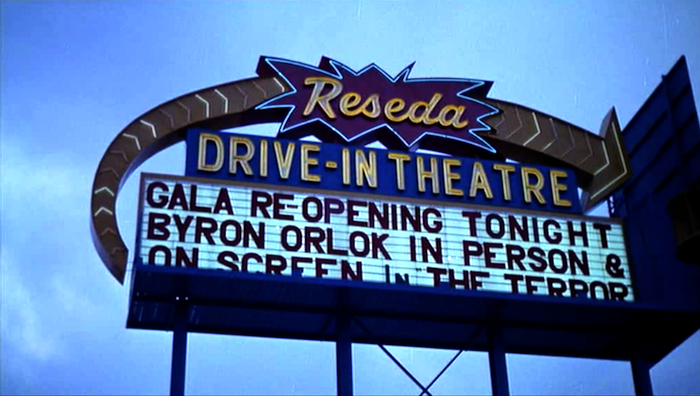 Targets came about because Boris Karloff owed Roger Corman a couple days’ work. Corman let Peter Bogdanovich make a picture out of the two days of Karloff and some footage from The Terror (1963). Bogdanovich and his wife Polly Platt based the story on Whitman, which was then in the news. Samuel Fuller helped out on the script, without credit or payment. The director managed to sell the picture to Paramount, which landed Corman a profit before it was even released.

The British Film Institute is bringing Targets to Blu-ray in March 2021, which will give us all a good look at the cinematography by László Kovács. The BFI will certainly load this up with supplemental stuff, too, making for a terrific package, I’m sure (hopefully, they’ll keep Bogdanovich’s commentary from the Paramount DVD). Highly recommended.