Here are two late-70s pictures from Sir Lew Grade. Shout Factory is bringing the twin-bill Blu-Ray out in just a few days.

Escape To Athena has a crazy cast (Sonny Bono?), gorgeous Greek locations, a terrific motorcycle chase and a cameo from William Holden.

Roger Moore made some interesting pictures in-between his Bond films, and this is one of them — though I’m a bigger fan of Shout At The Devil (1976) and The Wild Geese (1978)

They tried to make Terence Hill a star in the US, and it didn’t work. Me, I much preferred the Trinity films. Anyway, this is a pretty lavish production, but it should be better than it is. Hackman is always good, of course.

I’m so glad films like this are making their way to Blu-Ray. I’m looking forward to seeing Escape To Athena again.

James Caan is without doubt one of my favorite actors. From Howard Hawks’ El Dorado (1966) to Thief (1981), he cranked out one terrific movie after another. He passed away yesterday at 82.

In more recent years, Caan had a wonderful Twitter account, often sharing a photo from, or thought about, one of his pictures. I’m gonna miss you, Mr. Caan. 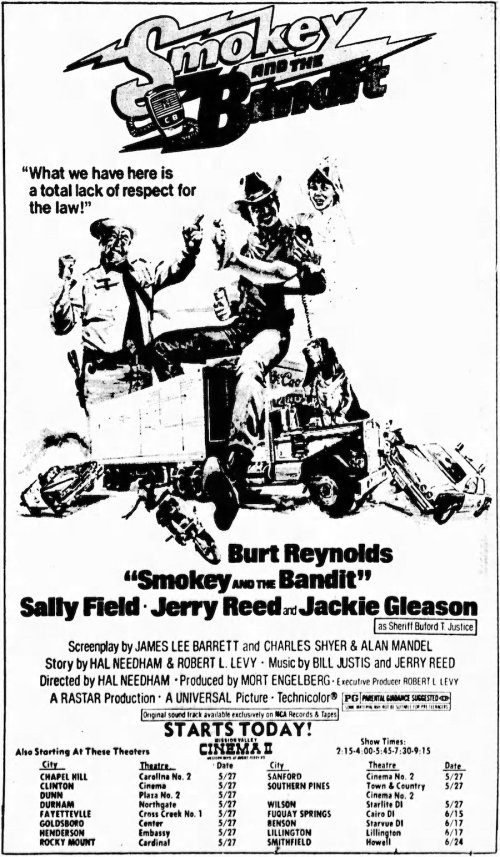 TCM and Fathom Events are bringing Smokey And The Bandit (1977) back to theaters for its 45th anniversary — May 29, June 1 and 2. Click the ad to find a time and place in your area.

Saw this on opening day (May 27) at the Mission Valley Cinema in Raleigh, North Carolina. (That’s the ad up top.) My daughter loves this thing, it’s a load of fun, and we’ll be at one of these screenings for sure.

Douglas Trumbull, the special effects genius/inventor/director has passed away at 79. You can seen him up top working on Stanley Kubrick’s 2001: a space odyssey (1968), building the moon bus model.

Blu-Ray News #309: He Came From The Swamp – The William Grefé Collection.

Arrow’s He Came From The Swamp: The William Grefé Collection offers up seven films produced and/or directed (and often written) by William Grefé, all newly restored from the best film elements around:

The Jaws Of Death (no Mako) played the Forest Drive-In here in Raleigh, NC.

Mr. Grefé participated in this from one end to the other. Each picture is packed with extras, from commentaries and trailers to director’s cuts and behind-the-scenes footage to photo galleries and a collector’s booklet. Also included is the documentary They Came From The Swamp: The Films Of William Grefé.

Should be a real hoot, and an exhaustive one at that. Coming in November. Recommended. 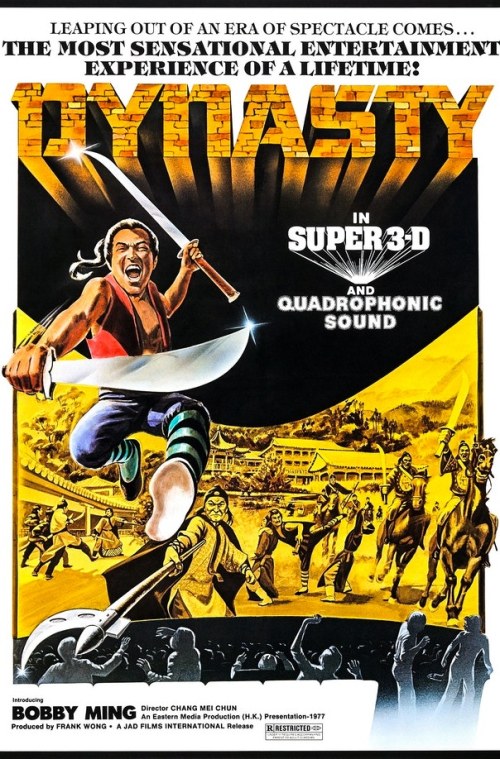 The fine folks at The 3-D Film Archive have announced a followup to the Kickstarter campaign that fueled their incredible Blu-Ray of Africa Screams (1949) — I’ll have a review of that one up soon, as soon as I find a few more superlatives!

This time, they’re taking on Dynasty (AKA Qian dao wan li zhu AKA Super Dragon), a 3-D martial arts picture released in the States in 1977.

The audio will present the English dub in its original 4-channel magnetic Quadrophonic sound.

They hope to have this in our hot little hands by December. There’s plenty of work to be done, so click on the one-sheet above and help get this thing going!

Hen’s Tooth Video has a Blu-Ray of Cross Of Iron (1977) on the way. Their special edition DVD boasted a great lineup of extras, and I hope those will make the leap to Blu-Ray. It’s coming in October.

This is a great film, the last great one from Sam Peckinpah, with a really incredible performance from James Coburn. (He also looks so cool in this one.) It’s a shame it’s been so hard to see over the years, but that’s how things tend to go with these international productions. Let’s hope this release will help change that. Highly recommended.

My daughter’s taken to Star Wars in a big way. She came across this.

Bet the pine needles fall off long before they hit hyperspace.

Here’s wishing you and yours a stellar holiday — and safe travels no matter how far, far away you have to go.

You may not know that William Friedkin’s Sorcerer (1977) is one of my favorite movies — so much so that I dedicated a blog to it alone.

It’s always good news to see the 4K restoration of this maligned masterpiece come available in some form in some part of the world. The latest is a special 40th anniversary edition from British label Entertainment One. It’ll be out November 6th.

Coming Back: Close Encounters Of The Third Kind (1977).

Steven Spielberg’s Close Encounters Of The Third Kind (1977) is 40 years old, which for some of us serves as a reminder of just how old we are. Yikes.

In a sci-fi movie year that had already given us Star Wars, Spielberg’s followup to Jaws (1975) was a big, big deal. We all went a little UFO-happy, just like we’d gotten collectively spooked by the ocean a couple years before.

For those of us who want to relive those days (to “make contact again,” as the trailer says) or give our kids a little taste of ’em, Close Encounters (Spielberg’s Director’s Cut) will play theaters for a week in September, with a new 4K and Blu-Ray release coming a couple weeks later. I’m getting stoked.