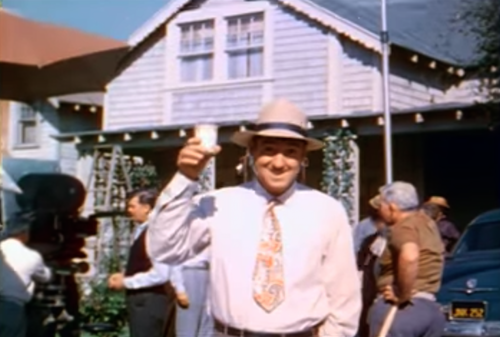 That’s Andy in the black sweater vest in front of the Mitchell camera. I had no idea Barney’s car was blue — the episode’s black and white.

“The Haunted House” is one of my favorite episodes of The Andy Griffith Show. Don Knotts must’ve liked it, too, because he used it as a springboard for his first feature, The Ghost And Mr. Chicken (1966). Recruiting a couple writers from Andy Griffith, and Andy himself as a story man (the “Attaboy, Luther!” running gag was his), they cooked up the tale of Luther Heggs (Knotts) spending a restless night in a “murder house.”

Don Knotts and Joan Staley between takes on the Universal backlot.

The lovely Joan Staley — who appeared in this, Gunpoint with Audie Murphy and an episode of Batman, all in 1966 — is charming as Knott’s love interest. Skip Homeier is perfect as a creep. And Vic Mizzy’s terrific score is worth the price of admission.

And no, the haunted house is not 1313 Mockingbird Lane from The Munsters, though it’s on the same Universal backlot street.

I saw The Ghost And Mr. Chicken repeatedly as a kid and love it to this day. (I even remember the red squiggly letterboxing they used during the credits in TV prints.) Sure, it’s a funny movie, but I find it so hard to be objective with this one. It’s a member of the “movie family” I feel compelled to visit every so often. (It’s got another thing going for it — it was an early date for my wife and I. She’s a big fan of The Andy Griffith Show and had never seen it, something I had to correct as soon as possible.)

It was a big deal around my house when this was announced for Blu-Ray (a Best Buy exclusive). The Ghost And Mr. Chicken has always looked good on video, from laserdisc to DVD to this new Blu-Ray. It’s a real beauty, sharp as a tack with eye-popping Technicolor. Highly recommended, especially to those who grew up with it.

Henry Fonda had already been a smash on Broadway in Mister Roberts by the time he and director John Ford started the movie. They didn’t see eye to eye on how to the approach the material, and Ford left the project midstream (I’m skipping over the tales of drunkenness and fisticuffs). Mervyn LeRoy was brought in to finish the picture. It’s hard to say who did what, but the result is wonderful. You can’t beat that cast: Fonda, James Cagney, William Powell, Jack Lemmon, Ward Bond and so on.

No Time For Sergeants follows Georgia boy Will Stockdale (Andy Griffith) as he’s drafted into the Air Force. It’s hilarious — and it went a long way toward making Griffith a star. He’s joined by Don Knotts, Nick Adams, Murray Hamilton and Dub Taylor. This time, Mervyn LeRoy directed the whole thing. Good God, this is a funny movie.