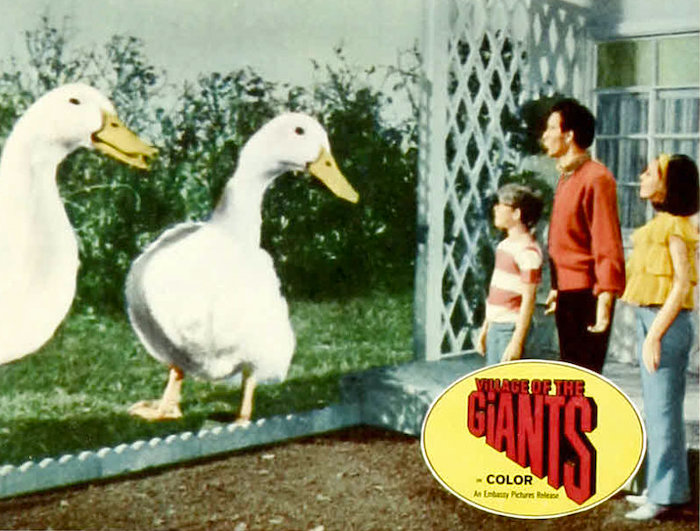 Another movie about big stuff from Bert I. Gordon. This one marries Gordon’s typical size-related theme to a Beach Party atmosphere. It’s coming to Blu-Ray from Kino Lorber later this year.

A group of teenager eats some stuff called Goo and “zoom to supersize.” The gang of 30-foot-tall juvenile delinquents then terrorize the small town of Hainesville. It’s mostly played for laughs, adding in cool elements like The Beau Brummels, music by Jack Nitzsche, Ed Roth’s Surfite and the worst fake giant legs you’ve ever seen. Some of Village Of The Giants was shot at Universal on the same town square set we know from It Came From Outer Space (1953), Gremlins (1984) and Back To The Future (1985).

The whole thing is a lot of dumb fun. Recommended.

While researching something completely unrelated, I came across this ad for a double feature of Hercules (1958) and Hercules Unchained (1959) playing a number of theaters in New York in February 1975, including the UA Rivoli, which was one of the only Dimension 150 houses around.

Seeing those great Steve Reeves peplum films, shot by Mario Bava in ‘Scope, on that deep curved Dimension 150 screen must’ve really been something.

By the way, the Rivoli ran Jaws that summer, which would’ve been cool on that curved screen.

Pitting the brilliant Sherlock Holmes against the insidious Jack The Ripper is an inspired idea, and it’s been the basis of some good books and movies. Bob Clark’s Murder By Decree (1979) is a really good one. (Saw it in the theater back in ’79, and it boosted a fascination with the Ripper that I still can’t crawl out from under.)

Christopher Plummer plays the great detective and James Mason is wonderful as his trusted friend Watson. Peter Cushing will always be my favorite Holmes, but Plummer is very, very good. Frank Finlay, who played Inspector Lestrade in a previous Holmes/Ripper picture, A Study In Terror (1966), does the same thing here, too.

Murder By Decree walks the line between mystery and horror perfectly.

Kino Lorber has announced a Blu-Ray for Murder By Decree, with a hint at some really cool extras. The mileage I put on my old laserdisc of this one confirms that I recommend it very highly.

Hen’s Tooth Video has a Blu-Ray of Cross Of Iron (1977) on the way. Their special edition DVD boasted a great lineup of extras, and I hope those will make the leap to Blu-Ray. It’s coming in October.

This is a great film, the last great one from Sam Peckinpah, with a really incredible performance from James Coburn. (He also looks so cool in this one.) It’s a shame it’s been so hard to see over the years, but that’s how things tend to go with these international productions. Let’s hope this release will help change that. Highly recommended.