Glad to see this one getting some attention. Kino Lorber is bringing Robert Aldrich’s Hustle (1975) to Blu-Ray later this year. It’s a cool movie with a great cast.

Imprint out of Australia has announced a deluxe Blu-Ray of Buzz Kulik’s The Hunter (1980), Steve McQueen’s last movie.

Based on the real-life bounty hunter Ralph “Papa” Thorson, the picture gives McQueen a chance to play around with his image. He’s feeling the aches and pains of age and needs reading glasses. And there’s a running gag about Thorson being a terrible driver. McQueen probably had a lot of fun tolling around in his character’s 1951 Chevrolet. The Thorson character has a love of goofy old things, from gas pumps to jukeboxes to wind-up toys, as did McQueen. They say McQueen had a lot of input on this one, even directing some stuff, and it shows.

Time has been kind to The Hunter. Back in 1980, it seemed rather small compared to what we expected from McQueen, and it had a bit of a TV-movie feel about it (Buzz Kulik was a long-time TV movie director). But now, its more eccentric, character-driven nature is a big part of its appeal — along with the opportunity to watch Steve McQueen for an hour-and-a-half. (I’d take it over 1974’s The Towering Inferno any day!)

Other highlights are a nice scene with Ben Johnson and McQueen in a Massey Ferguson combine chasing a Trans Am through a cornfield! The ensemble cast does a great job of elevating a pretty lazy script, and its episodic structure actually works in its favor.

Imprint has promised a commentary and vintage documentary, along with a collection of trailers and TV spots. But, with all releases like this, the main attraction is the movie itself, restored in high definition. I’m so happy to see this cool little action movie, and its star, get a nice valentine like this.

Someone once said that Steve McQueen could act with the back of his head. Lots of folks call him the “King Of Cool.” For me, any movie he’s in comes highly recommended.

A Million Feet Of Film: The Making Of One-Eyed Jacks.

A Million Feet Of Film: The Making Of One-Eyed Jacks is the story of Marlon Brando’s One-Eyed Jacks, his first, and only, time as director and a picture that may be better known for its troubled production than its merits as a film.

More than three years from contracts to premiere. Six months of shooting. Almost 200 miles of negative exposed. A revolving door of personnel, including Rod Serling, Sam Peckinpah and Stanley Kubrick — all gone before the first frame was shot. A budget that ballooned from $1.8 million to $6 million. And the eventual takeover of the film by Paramount. Click the cover to order. 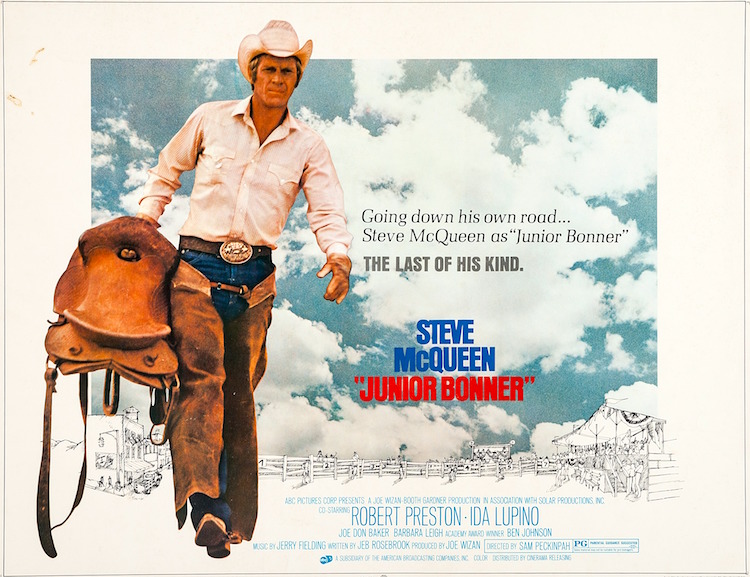 Sam Peckinpah’s Junior Bonner (1972) is a wonderful movie, plain and simple. And Kino Lorber’s bringing it to Blu-Ray this summer. Its previous DVD releases weren’t anamorphic, so this will be a huge leap forward.

If you haven’t seen it, you’re in for a real treat. I can’t recommend this one highly enough. Thanks to Paula for the photo of McQueen and Ben Johnson.