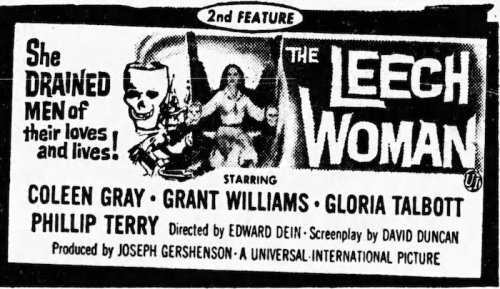 I’ve been digging Scream Factory’s Cadillac treatment of later-50s Universal horror pictures like The Mole People (1956) and The Deadly Mantis (1957) — and their Tarantula! (1955) is downright perfect. These are movies I love dearly, and revisiting them in this kind of shape has been wonderful. It’s odd, but while I’m looking a little frayed around the edges, these old movies from my childhood are looking better than ever. Which sort of leads us to their next release, The Leech Woman (1960). 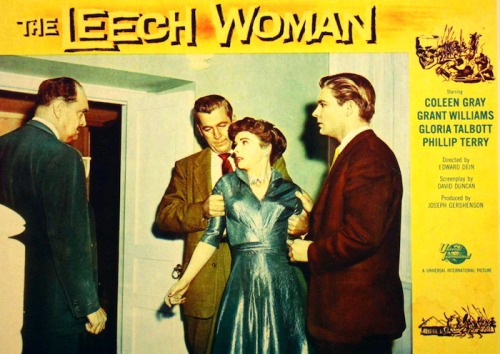 It’s the usual bathe-in-blood-to-stay-youthful thing, trading the pineal gland for blood. It was directed by Ed Dein, who gave us a couple gems, Shack Out On 101 (1955) and Curse Of The Undead (1959). And it originally played in a twin bill with Hammer’s Brides Of Dracula (1960).

Of course, The Leech Woman is never gonna knock Bride Of Frankenstein (1935) or something out of the Universal Horror Hall Of Fame, but it’s a real hoot. It’s coming in August, and I highly recommend it.