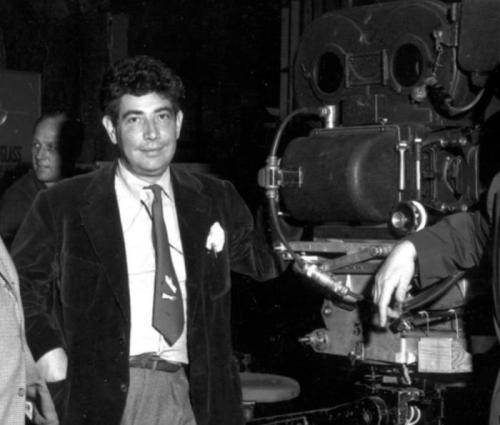 Man, I can’t wait for this! Kino Lorber has announced a three-picture Blu-Ray set of Edgar G. Ulmer science fiction movies, coming in late March. Of course, Mr. Ulmer was a master at making a decent movie for an insultingly paltry amount of money and time. Just look at Detour (1945) or The Naked Dawn (1955) for evidence of that. These three science fiction things show that same level of ingenuity, along with Ulmer’s habit of giving bigger parts to actors normally seen in second lead or character parts.

Shot in a week on leftover sets from Joan Of Arc (1948), you’d think that the biggest line item in the budget was the smoke machine, since the picture uses tons and tons of fake fog to approximate a Scottish moor and hide things they don’t want you to see. The alien’s suit is really cool and the overall effect — from the fog to the spacesuit to the alien’s musical language — is creepy as hell.

Ulmer did these two pictures back to back over two weeks in Dallas, Texas, for Miller-Consolidated Pictures. Robert Clarke, the star of The Man From Plant X, had just directed and starred in The Hideous Sun Demon (1960). He was the producer of Beyond The Time Barrier and brought in Ulmer to direct. When Miller-Consolidated Pictures went broke, AIP bought these up (for pretty much just the lab costs) and released ’em as a twin bill.

Seeing these in high definition is gonna be a real treat. Highly, highly recommended. 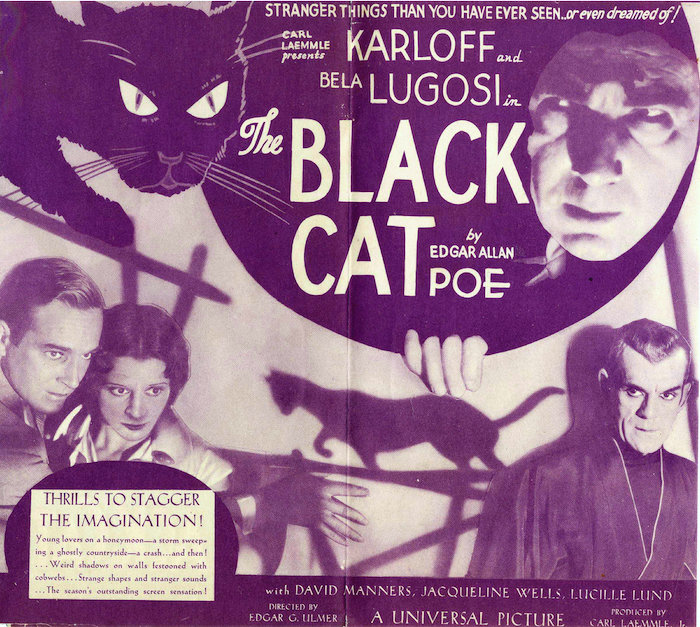 When it comes to the creepy weirdness of 30s Horror, it’s hard to beat Edgar G. Ulmer’s The Black Cat (1934). It makes almost no sense, piling depravity upon depravity (Karloff marries his step-daughter and has a basement full of dead women in glass cases; Lugosi skins Karloff alive) into some sort of Impressionist fever dream of a haunted house movie that’s absolutely original in every way. The posters screamed “STRANGER THINGS THAN YOU HAVE EVER SEEN… or even dreamed of!” — and, for once, they’re weren’t kidding.

It opens like about 157 movies you’ve already seen, however. A group of travelers wind up in a creepy house in the middle of nowhere after their bus crashes during a storm. Anything but original, right? But from then on, things get plenty weird, fast.

Lugosi is there to settle a score with Karloff, who was responsible for the deaths of thousands of men during the war — and made off with Lugosi’s wife and daughter while he was a prisoner of war. If that isn’t enough, Karloff chose to build his Art Deco home on top of the ruins of the fort he commanded — the scene of all those deaths.

Before its crazed 65 minutes are over, ailurophobia (the fear of cats), a satanic sacrifice, drugs, the basement full of dead women in glass cases and Karloff being skinned are added to the mix. Something for everyone! 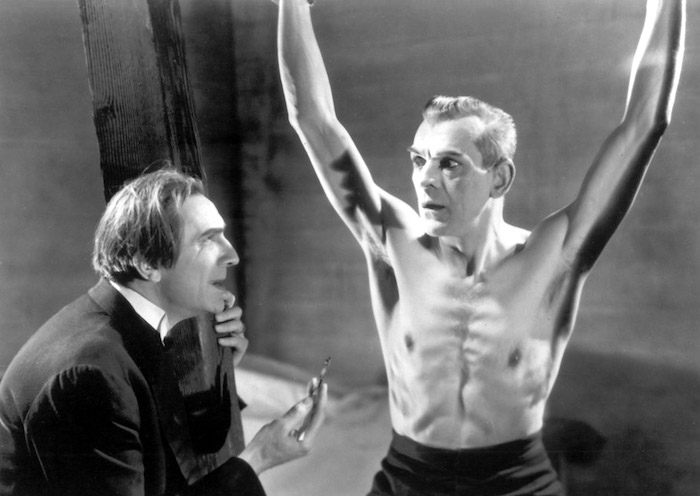 Edgar G. Ulmer was a master at making something out of nothing, and today he’s known for his quickie noir masterpiece Detour (1945). But here, Universal gave him two of their biggest stars, Frankenstein and Dracula themselves, and he created Universal’s biggest hit of the year. He also worked on the screenplay and designed the sets.) After a scandal (an affair with a producer’s wife), Ulmer was blackballed by the major studios, and he spent the rest of his career working largely on Poverty Row.

Only once did a movie creep me out so bad that I checked out. That was Tod Browning’s Freaks (1932), which I have no intention of revisiting. But as a kid, The Black Cat really got to me, and I bring that creeped-out memory to it every time I see it. It’s a very weird movie, dealing with some very heavy stuff — a sense of doom and evil is burned into every frame.

The Black Cat is the first of four Karloff-Lugosi films in the Scream Factory’s Universal Horror Classics Vol. 1. The Others are The Raven (1935), The Invisible Ray (1936) and Black Friday (1940). Are all given the real Cadillac treatment and all look wonderful — with a healthy batch of extras. With Gary Don Rhodes, Gregory William Mank and Tom Weaver involved in commentaries and documentaries, you know you’re in good hands.

I first saw The Black Cat on the late show. The station ran a pretty battered 16mm print with murky contrast, a few scratches and some changeover cues where previous stations had marked where they wanted their commercials to go. To see it on high-definition is a revelation. I rarely freeze movies as I watch them, but I stopped this one several time to study Ulmer’s sets and just take in the striking quality of the transfer.

This thing is an absolute must. 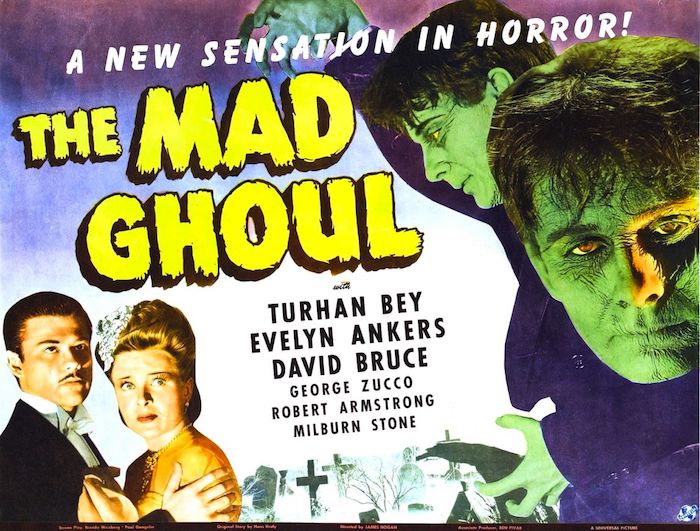 Scream Factory has two more collections of Universal horror pictures on Blu-Ray on the way.

Actually, I think Volume 2 is already out. Just take a look at how many feature Lionel Atwill or were directed by George Waggner — true signs of quality.

The first volume, which focused on Karloff and Lugosi, is terrific. It features one of the great horror films of the 30s, Edgar G. Ulmer’s The Black Cat (1934), looking splendid!

Detour (1945) is a cheap little noir picture from Poverty Row. So why is Criterion bothering with it? Because it’s also one of the finest examples of film noir out there — and maybe Edgar G. Ulmer’s best film.

For decades, Detour‘s many devotees have suffered through horrible video transfers that make it look even more low-rent than it really is. In some ways, it’s the perfect picture to get Criterion’d.

There’s some controversy about just how quick, and cheap, Detour was actually made. But regardless, Ulmer did his usual very much with very little. Fatalism drips off the screen. Ann Savage is without doubt the worst femme fatale ever — and Tom Neal is the poor sap she squashes like a bug.

This is a terrific, crazy noir picture — and it’s as essential to human existence as oxygen. Coming in March.

Glenn Erickson’s CineSavant is one of my favorite movie blogs, and he recently pointed out that the restoration of Edgar Ulmer’s Detour (1945) will be shown next month at the Egyptian Theatre.

There’s some controversy about just how quick, and cheap, this picture was made. But regardless, Ulmer did his usual very much with very little. This is a terrific, crazy noir picture — and not to be missed.

A big fat thank you to the George Lucas Family Foundation for funding this restoration.

Another no-budget miracle from the incredible Edgar G. Ulmer. The Man From Planet X (1951) movie creeped me out so bad as a kid — and it still has an odd, unsettling quality to it unlike any other film I can think of.

Filmed in just six days at Hal Roach Studios, on sets left over from Joan Of Arc (1948), it looks like most of the shoestring budget went to juice for the fog machine. It ended up being one of the first ( some say the first) alien-comes-to-earth movies. And I’d put it near the top of my Edgar Ulmer list.

Shout Factory has this one touching down on Blu-Ray this summer. Highly, highly recommended. Let’s hope more Ulmer makes its way to Blu-Ray.