Film Chest Media Group has announced an upcoming set of all 39 episodes of Decoy (1957-1958). This cop show, starring Beverly Garland as policewoman Casey Jones, was shot on location in New York. 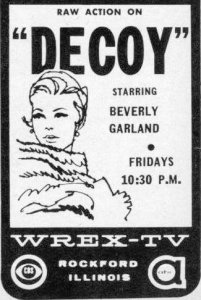 I’ve seen a few episodes of Decoy over the years, and they’re really cool — with a bit of a Dragnet vibe. Of course, the 50s New York locations are terrific. Beverly Garland is one of my favorite actresses, so I’m really excited to see how this set looks. The release date is listed as May 30.