Laurel & Hardy boxes from Blackhawk Films, similar to the one on the left, were a real fixture of my youth. Watching Stan and Ollie’s funny, sweet, brilliant films was just something you did — kinda like eating, breathing and going to school, only a lot funnier.It was from watching movies like this that I learned to appreciate how much sharper 16mm was than 8mm, and that Super 8 was a step up from 8 — though I prefer the sound of standard 8 running through a projector. (Come to think of it, it was from these pictures that I learned how to thread a projector in the first place!)Lucky for us, there’s never been a time that these movies weren’t around in some format — film, tape, laserdisc, DVD.And now there’s Blu-Ray. Kit Parker has shepherded a collection called Laurel & Hardy: The Definitive Restorations, presenting many of the team’s finest work in absolutely stunning quality.

With any film, one of the things we gain from Blu-Ray is texture, and it can really boost the whole experience. First, there’s the grain of the film itself. While it bothers some people, we’re watching movies here — and grain is a big part of it. Accept it, make peace with it, come to love it.Next, there’s the texture of what’s in the film, of maybe an actor’s jacket or an actress’s hair. Seeing these Laurel & Hardy pictures in 16mm, such texture was simply not there, no matter how good the print was. Now, we can see the grain in the wood of the piano crate in The Music Box (1932) or the bristles in the brush glued to Ollie’s chin in Busy Bodies (1933).Then there’s the contrast levels. We’ve had to accept these films over the years with contrast that was all over the place. Washed out and flat in one, blown out in the next. There’s none of that here, they’re almost perfect, and better yet, they’re consistent from one feature or short to the next. 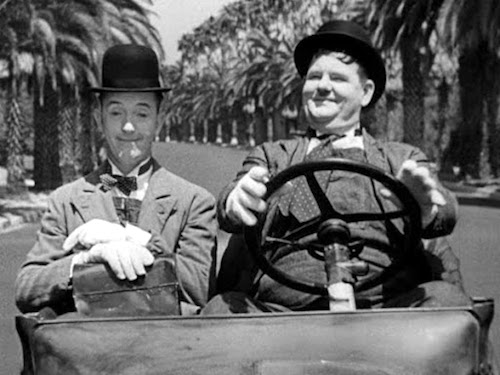 The remarkable clarity here, which is where the texture comes from, opens these films up in a terrific way. You can really study the early ’30s Los Angeles behind Stan and Ollie as they drive their old Ford through town. What a beautiful place it was.The sound is better, too. It’s clean, and there’s an actual range to it. The music is as buried in the mix as ever, but since the audio is so much better overall, we can hear it, and appreciate it, so much better.I never thought we’d see these things like this, not in a million years.Beyond the presentation, the films themselves are a real treasure. They’re hysterically funny in spots, and the brilliance of Stan Laurel, Oliver Hardy and everyone who worked on these things has never been more obvious. The cinematography can be studied. The art direction can be fully appreciated. And the subtleties of so many wonderful facial expressions aren’t lost. Hardy’s little looks into the camera are so funny, so perfect, so brilliant. While fans of Laurel & Hardy surely have their individual favorites, many of the team’s most celebrated features and shorts are here. Here’s what you get—Features:
Sons Of The Desert (1933)
Way Out West (1937)Shorts:
The Battle Of The Century (1927)
Berth Marks (1929, original VitaPhone track)
Berth Marks (1936 re-release track)
Brats (1930, original VitaPhone track)
Brats (1937 re-release track)
Hog Wild (1930)
Come Clean (1931)
One Good Turn (1931)
Helpmates (1932)
The Music Box (1932)
The Chimp (1932)
County Hospital (1932)
Scram! (1932)
Their First Mistake (1932)
Towed In A Hole (1932)
Me And My Pal (1933)
The Midnight Patrol (1933)
Busy Bodies (1933)
Twice Two (1933)
That’s That (1937)
The Tree In A Test Tube (1942)They all look incredible. A splice here or there doesn’t take away from the brilliance and enjoyment of these movies one bit. And the many extras, from galleries to interviews, offer up all hours and hours of pleasure. I’ve hardly scratched the surface of all the riches here. 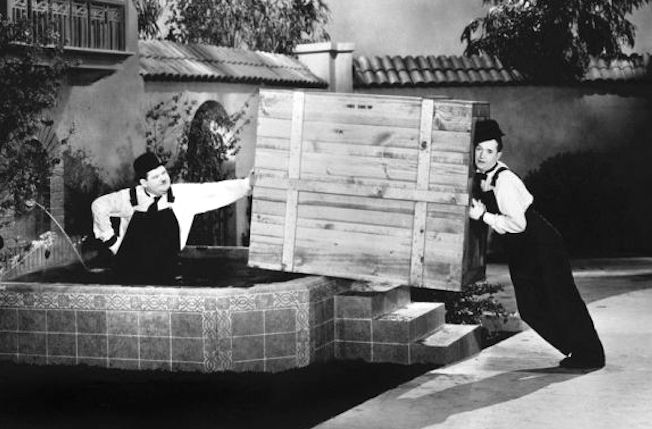 One of the things we obsessive movie collectors have to wrestle with is how many times can we be expected to upgrade one movie? When does the format-to-format progression get to be just too much? (For instance, I’ve purchased The French Connection at least eight different times since Magnetic Video Corporation.) When the improvements are as substantial as those here, and they have the incredible affect on the overall experience as these restorations do, then that argument, that number, really means nothing. These wonderful little movies are absolutely essential, in any form. And this upgrade, from whatever you have to Laurel & Hardy: The Definitive Restorations, is just as essential. And a big thanks to Kit Parker, Sabucat, the folks at UCLA and everyone else who had a hand in making this set, and these restorations possible. You did us all a huge favor.

If you’ve gone through life without seeing a Laurel & Hardy short like Big Business (1929) or The Music Box (1932), I feel really sorry for you. Luckily, Kit Parker is ready to help you exit that world of darkness with Laurel & Hardy: The Definitive Restorations, a four-disc Blu-Ray set full of terrific shorts and features from Stan and Ollie. 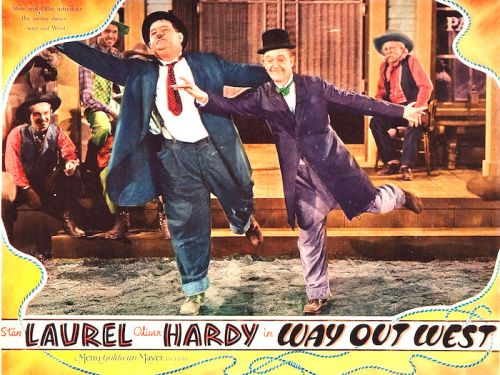 Restored from the best 35mm to be found on the planet (thanks to the efforts of Jeff Joseph/SabuCat, UCLA Film & Television Archive and Library of Congress), this set will also include commentaries, interviews, stills and The Tree In A Test Tube (1942), a color short produced by the U. S. Department of Agriculture. It’s coming in June. Essential stuff.

Big Business (1929) is only technically a Christmas movie — Laurel & Hardy sell Christmas trees door to door. It contains nothing resembling the holiday spirit — since it seems determined to show just how mean, spiteful and destructive people can be. Of course, none of that matters since it’s so incredibly funny.

They say Hal Roach bought the house you see in the film (it belonged to a studio employee) for the sole purpose of letting Stan Laurel and Oliver Hardy destroy it. We can assume he did the same with the car that James Finlayson dismantles in retaliation. How much of the tit-for-tat vandalism was scripted and how much was ad-libbed is anybody’s guess.

You can find Big Business on YouTube if you don’t have it at home. Whenever I watch it, I imagine just how much fun it must’ve been to make. And Oliver Hardy has quite a batting average when it comes to hitting pottery with a shovel.