In the fall of 1973, there was evidently a wave of UFO sightings all across the US. There were a couple in the Reno, Nevada, area. The Granada Theatre acted quickly, booking a couple of sci-fi pictures for a midnight show — The Day Mars Invaded The Earth (1962) and The Day The Earth Stood Still (1951).

Fun local bookings are something I really miss, whether they’re Halloween marathons at the drive-in or something more topical like this one. Going to the movies used to be so much fun. 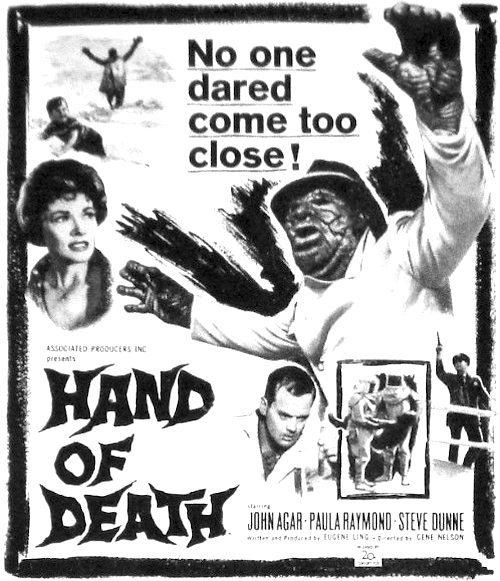 You know you’re having a good day when a black-and-white CinemaScope monster movie starring John Agar that you’ve never seen shows up in your mailbox. In my case, such a day came courtesy of Hand Of Death (1962), a 60-minute cheeseball masterpiece from Robert Lippert’s Associated Producers, Inc. It’s a picture that’s been almost impossible to see over the last few decades, especially in something resembling its original CinemaScope.

Working in a desert laboratory, research scientist Alex Marsh (John Agar) develops a powerful nerve gas. Accidentally exposed to it, he becomes a hideous, burned, swollen monster — and anyone he touches dies. The last half of the picture finds Agar driving around L.A. in a Chrysler station wagon, killing a cab driver, and eventually winding up in Malibu where he terrifies his girlfriend (Paula Raymond) in a beach house before the cops catch up with him.

John Agar: “Hand Of Death was [Gene Nelson’s] first shot at directing, and I thought he did a very good job for his first go at it.”

Nelson was mentored along the way by Maury Dexter, who seemed to be cranking out one of these API features about every week. Nelson’s job was no doubt made even easier by having master cameraman Floyd Crosby on hand. This was around the time Crosby was collaborating with Roger Corman on pictures like Pit And The Pendulum (1961), working wonders on a low budget. Carlos, Agar’s lab assistant, is played by John Alonzo, who’d leave acting to become a cinematographer (his work on Chinatown is beautiful). Wonder if watching Crosby at work influenced Alonzo’s career change?

John Agar: “First they got some long johns and padded ’em to make me look like I weighed about 400 pounds. Then they had this grotesque mask — a complete hood — and very large hands, to make me look burned… It wasn’t that bad — except at the very end, when I finally died. We went out to Malibu for a scene where I run into the ocean trying to get away from the police, and they shoot me. When I fell, the waves started knocking me around, and with that mask over my face I didn’t know where I was! My eyes were set way back and the mask was sticking way out in front, and the only thing I could see was just directly straight out. I couldn’t see the waves coming — that water was crashin’ on me, and I was flopping around, supposed to be dead! That was quite an experience.”

The monster getup is pretty impressive. It doesn’t let Agar get very expressive, but since all he’s called to do is grunt and get mad and bust stuff, it’s fine. Of course, by the early 60s, Agar had been in a slew of these movies, from great ones like Tarantula (1955) to The Brain From Planet Arous (1957). He’s pretty good here, delivering the typical pseudo-science dialogue with authority. Paula Raymond is able to make her role a bit more than the usual screaming girlfriend.

The picture also benefits from Sonny Burke’s jazzy score, which mixes organ, theremin and bongos to great effect. It gives the picture a little extra snap, and I’d give my right arm for a soundtrack LP. (I knew Burke from my Frank Sinatra records and his work on 1969’s The Wild Bunch.)

Hand Of Death is a cheap monster movie. You could even say very cheap. Agar becoming a monster isn’t a cosmic punishment — he simply knocks over a flask and gets the stuff on his hands, so it doesn’t have the Beware Of Science message you find in so many of these things. It doesn’t build to a Big Finish, though it has its moments (usually when someone first sees Agar’s deflicted* head). But for some reason, it all comes together — the cast, the cinematography, the music, the makeup — into something I love.

There have been complaints about a few of the transfers from Fox’s Cinema Archives collection, namely pan-and-scan versions of Scope pictures. But I can’t imagine how Hand Of Death could look any better than it does. It’s clean and crisp, with contrast, grain and framing the way they should be. This isn’t the kind of movie you’re likely to see turn up on Blu-ray, and since this DVD-R (available from major online retailers) looks so good, that isn’t a problem.

For Hand Of Death to go from practically lost to looking like this, is wonderful. Is this a good movie? No. Do I recommend it? Absolutely.

* Deflicted is a Frank Zappa word, not a real word. 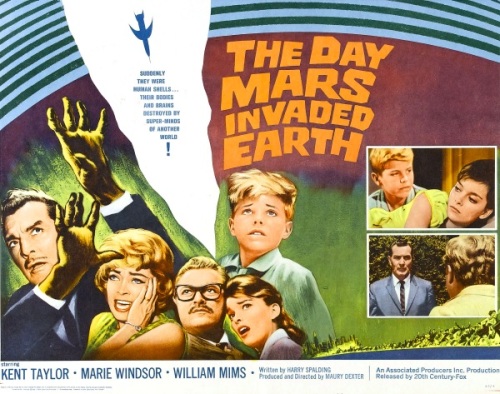 In the late 50s, Lippert Pictures made a slew of low-budget, black-and-white, widescreen films for 20th Century-Fox — released under the name Regal Films, with CinemaScope renamed Regalscope. The arrangement continued into the 60s under the name Associated Producers, Inc.

The Day Mars Invaded The Earth (1962) is one of the better ones, I think. Made on a shoestring, Maury Dexter makes sure we see more on the Scope screen than the budget would have you expect, thanks largely to the use of Greystone Mansion in Beverly Hills. It’s an odd take on the whole alien invasion thing, with some creepy moments that continue to haunt those of us who saw it as a kid.

Maury Dexter (in Tim Weaver’s I Talked With A Zombie): “…On this one I was keenly aware of wanting to try to get… a weird feel, if that’s the right word. Something a little different, a little eerie.”

Dexter got what he was aiming for. It’s a creepy little movie. And we can get it April 7 from Fox’s Cinema Archives collection. Released the same day is API’s Hand Of Death (1962) starring John Agar.

I recommend another one of Dexter’s API films, House Of The Damned (1963), which also makes good use of Greystone Mansion.