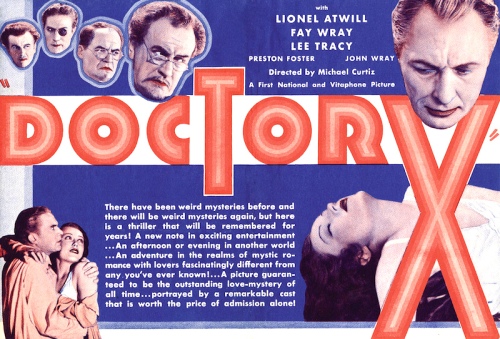 The horror movies of the early 30s are a weird, wicked, wonderful lot — with the Pre-Code ones having the added benefit of being able to go a bit further with what we see and what’s hinted at. Doctor X, for instance, has cannibalism as one of its tasteless themes — and while we don’t see any actual people-munching, just a year later, merely mentioning it would’ve given the censors fits. 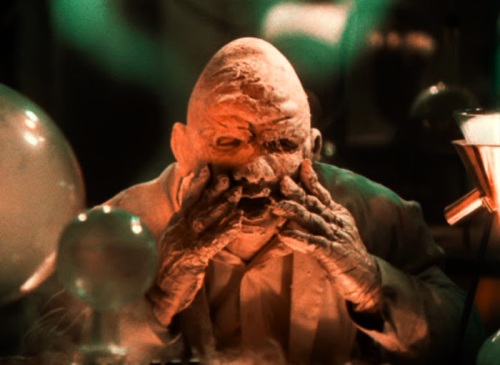 That’s what makes these old movies appeal to me so. Since they can mention, or allude to, just about anything, that’s exactly what they do. When it comes to the lurid, everything goes, and let the very skanky chips fall where they may. Doctor X touches on all kinds of dreadful things: cannibalism, mutilation, rape, a heart in a jar, prostitution. They just pile ’em all on, and if it doesn’t make a whole lot of sense, well, that’s OK. Ah, the joys of Pre-Code Horror. 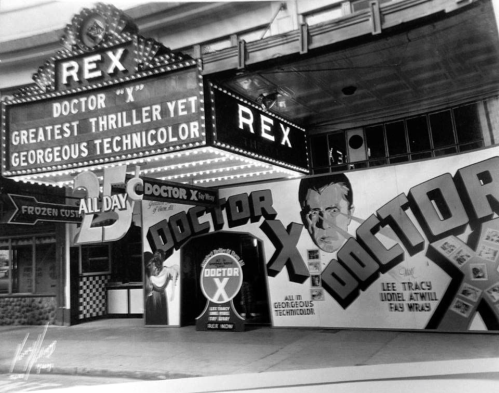 There’s a cannibalistic serial killer working nights in New York City. About all witnesses can offer up is that he’s hideous-looking. The cops turn to Doctor Xavier (Lionel Atwill) when they see a connection between these nasty killings and his medical academy. The fact that some of the researchers there are studying things like cannibalism and the effects of the moon on the human psyche only adds to their suspicion.

Dr. Xavier gathers these doctors and researchers, along with his daughter (Fay Wray) at his beachside home to try to sort out the killings. A reporter (Lee Tracy) makes his way there, too. This sets up a murder mystery with a little haunted house picture nailed to it, spiced up with as much out-and-out weirdness as they could get away with.

Lionel Atwill is a lot of fun as Dr. X. He’d make a career out of mining the mad doctor vein he created here. Fay Wray is charming, and really lovely in this early Technicolor. Of course, she’s one of cinema’s all-time great screamers. As the spunky reporter, Lee Tracy gets old pretty quickly. And I don’t buy it for a second that Fay Wray would fall for him. 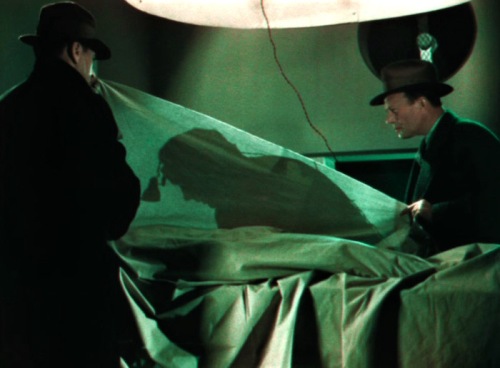 Art director Anton Grot and cinematographer Ray Rennahan use the two-strip Technicolor’s limited color palette for all it’s worth, creating plenty of mood and some downright weird images — with a decided emphasis on green. These otherworldly hues, coupled with the picture’s sinister, suggestive subject matter, come together to create something truly weird and downright creepy.

Almost a year ago, Warner Archive treated us to a restored Blu-Ray of Warner’s later color horror picture, The Mystery Of The Wax Museum (1933). (The success of Doctor X spawned Wax Museum, which was created by many of the same folks.) A couple of well-worn 35mm prints were all they had to work with, and the results were eye-poppingly beautiful. With Doctor X, they faced a similar task, and the results are just as startling. If you can, dig out the old laserdisc (which we all used to oooh and ahhh over), and you’ll see just how much work was done here. It’s easy to focus on the visuals, which are so rich and moody, but the soundtrack has been given a thorough cleaning as well.

Doctor X was restored by UCLA Film & Television Archive and The Film Foundation in association with Warner Bros. Entertainment Inc. Funding was provided by the Hobson/Lucas Family Foundation. A big thanks to all those associated with this. It’s incredible.

Warner Archive has put together another impressive package for this one. There are two commentaries, a couple documentaries — along with the alternate black and white version, which was shot alongside the color version. There are subtle differences, but most of the takes are the same.

It’s amazing to think that us movie nuts used to travel sizable distances to see Doctor X in color — any kind of color. And now, for about the price of a pizza, we can have it in our homes looking as good, if not even better, than it did in theaters back in 1932. This one’s as essential as it gets.