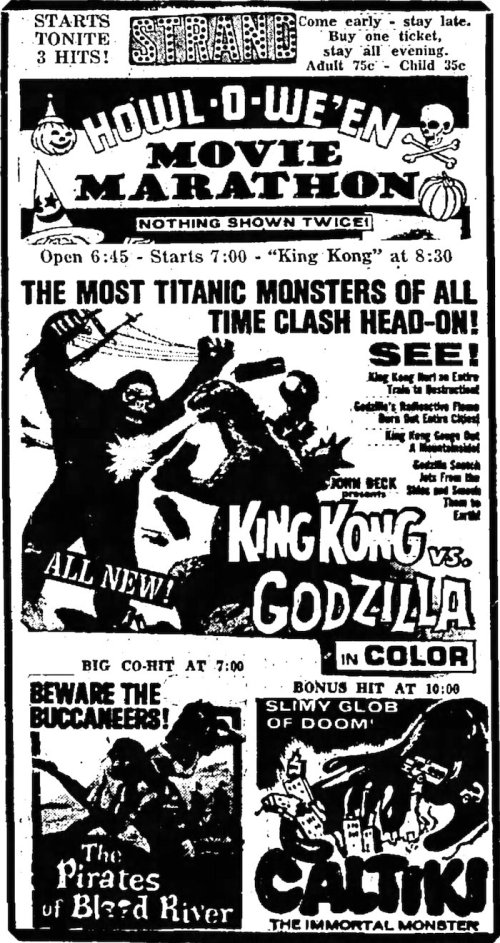 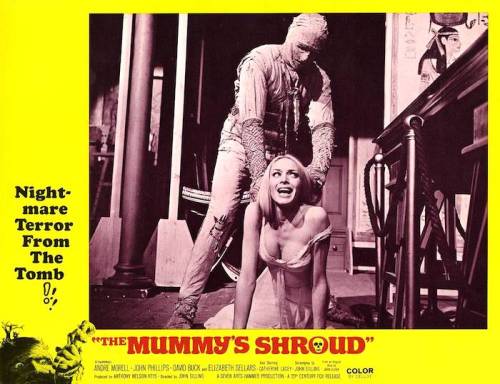 What is it about The Mummy? Both Universal and Hammer created masterpieces with their first Mummy movies, but had trouble keeping things going with the sequels.

The Mummy’s Shroud (1967) was the third of Hammer’s four Mummy films, though it’s the last one to actually feature a resuscitated mummy walking around. Blood From The Mummy’s Tomb (1971) wisely did not wrap Valerie Leon in bandages.

Director John Gilling had just done The Plague Of The Zombies and The Reptile (both 1966) for Hammer and stepped right into this one. He also wrote the script. Gilling and cinematographer Arthur Grant came up with a great-looking movie, which makes the upcoming Blu-Ray (early 2020) from Scream Factory so exciting. That and the sarcophagus full of extras we’ve come to expect from Scream Factory’s Hammer series. Looking forward to this one! 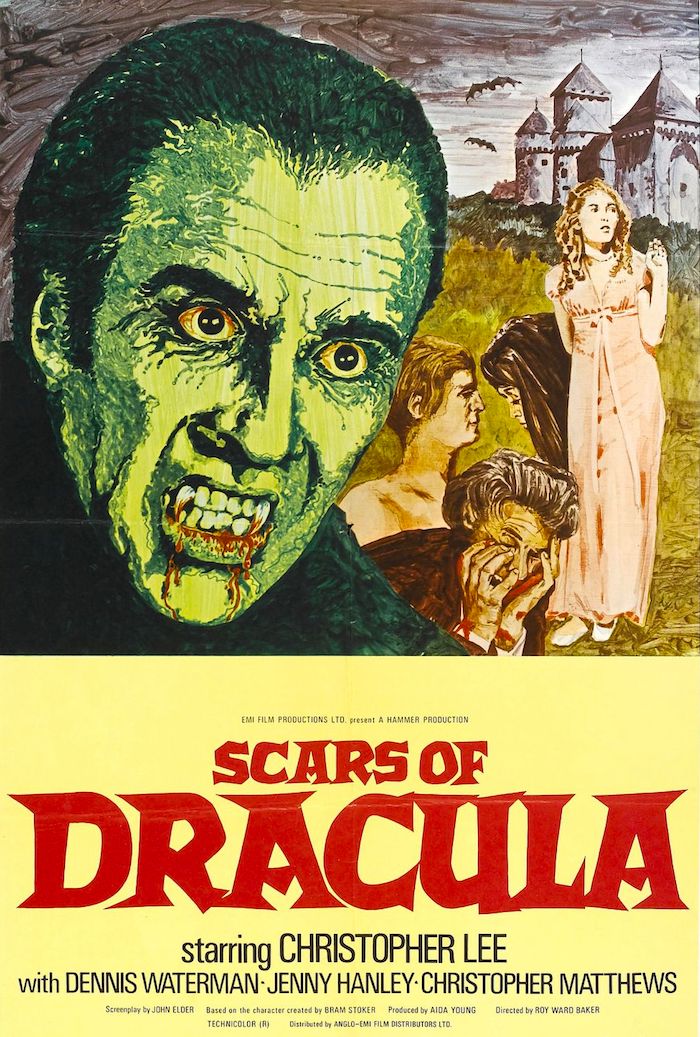 Scars Of Dracula (1970) has a weird place in the Hammer/Lee Dracula series. It’s the last of the period ones, coming right before Dracula AD 1972. It gave Christopher Lee more to do than a lot of these pictures did. In some, Dracula seems like an afterthought — not a good move when his name’s in the title. And it was directed by Roy Ward Baker, who made some terrific movies. His A Night To Remember (1958) is one of my all-time favorite films.

Scars Of Dracula has also been one of the harder films in the series to track down on TV or video over the years. Which makes the upcoming Blu-Ray from Scream Factory such a great thing. They’ve done a great job with their previous Hammer releases, and I’m sure this one will be just as good.

Coming in September. You know, if I was 12 years old again, most of my allowance would be going to Shout/Scream Factory. 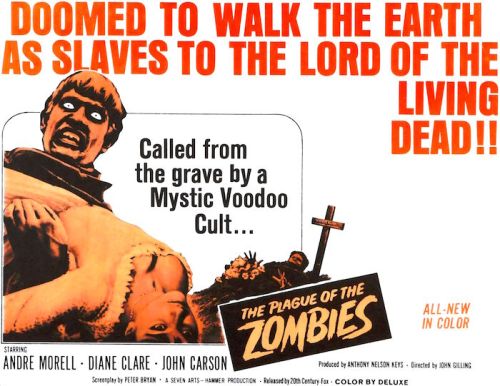 Every kid who grew up watching horror movies (old or new) has a scene or two they remember fondly (or dreadfully) for how badly it scared them as a kid. Psycho‘s shower scene. Ben Gardner’s head in Jaws. The list goes on and on. Well, one of mine’s in Hammer’s The Plague Of The Zombies (1966). 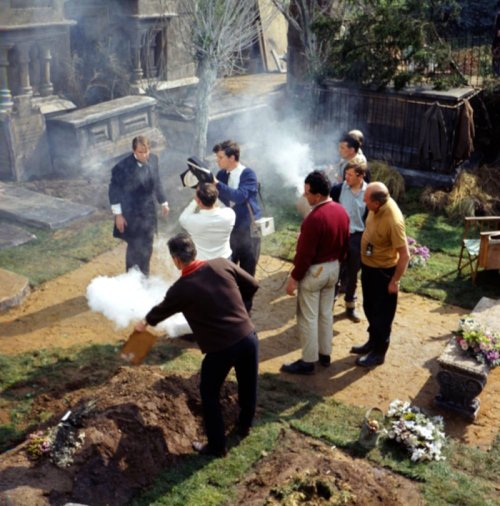 Shooting the foggy nightmare sequence on a beautiful day.

There’s a nightmare sequence about halfway through the film with plenty of fog, odd camera angles, crazy colors and lots of dead bodies either coming out of the ground or wandering around a graveyard. It totally wigged me out as a kid (much like the zombie in the back of a hearse in a certain episode of The Night Stalker).

So I dropped the new Blu-Ray into my player with a mammoth pile of fondness (and gratitude to our friends at Scream Factory). And boy, this thing really knocked me out. The color is terrific, the sound has real punch to it, and the movie’s even better than I remember. 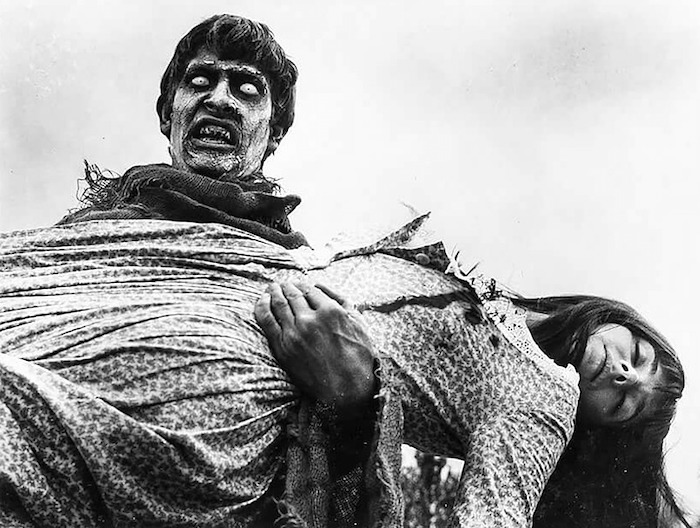 The Plague Of The Zombies features the old voodoo/Haiti kind of zombies (as seen in 1932’s White Zombie), as opposed to George Romero’s flesh-munching variety. They’re being used by Squire Hamilton (John Carson) as workers in an old tin mine. In the late 19th century, Cornwall evidently had a pretty severe labor shortage. 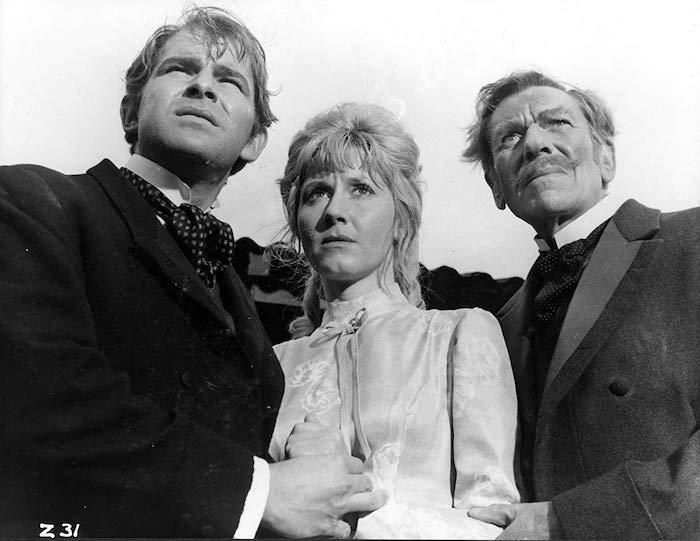 When a rash of people in his village start dying, a young doctor (Brook Williams) turns to his old friend Sir James Forbes (André Morell) to help get to the bottom of things. Morell is terrific as the old doctor, but the prize goes to Jacqueline Pearce who pretty much walks away with the movie as one of the walking dead. By the way, Brook Williams gets killed off in the first 10 minutes of my all-time favorite movie, Where Eagles Dare (1969).

John Gilling wasn’t one of Hammer’s major directors — he came and went over the course of the studio’s heyday. But he made some of their better films, with this being one of them. His The Pirates Of Blood River (1962) and The Reptile (1966, made back to back with The Plague Of The Zombies) are well worth seeking out. His 1960, non-Hammer The Flesh And The Fiends, which puts Peter Cushing in the tried-and-true Burke and Hare grave robbing/murder story, is terrific — and way up near the top of my Blu-Ray Wish List. 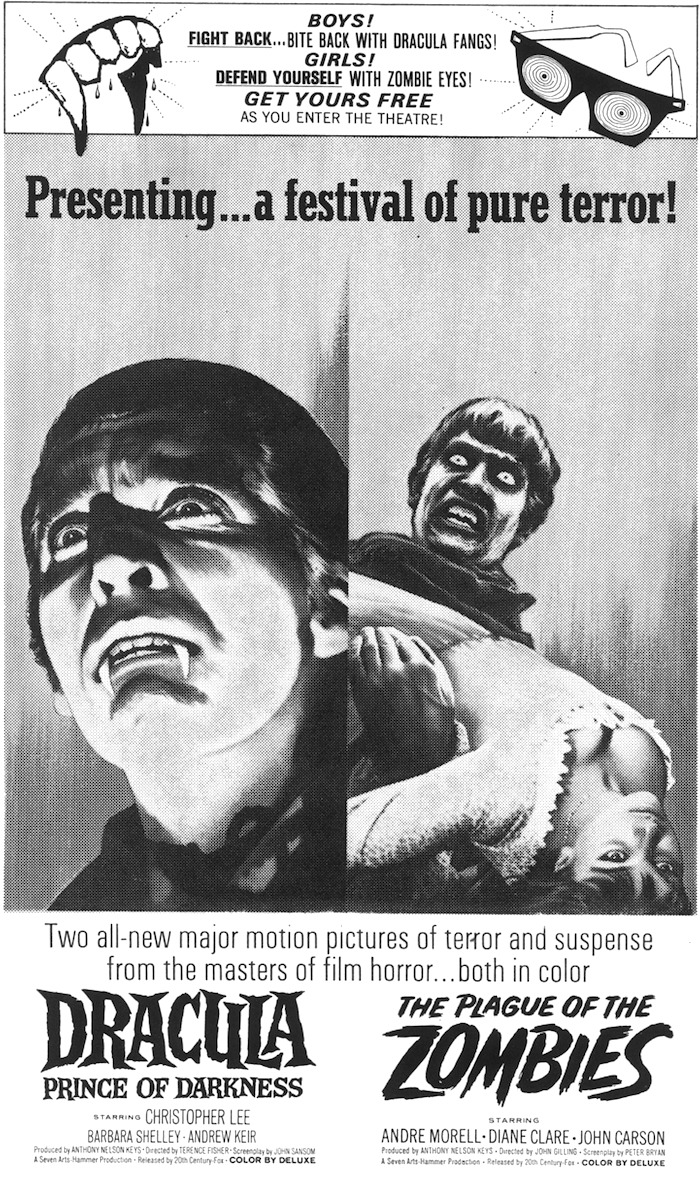 But back to The Plague Of The Zombies. The geniuses at Hammer offered this one up in a twin-bill with Dracula – Prince Of Darkness (1966), the second of the Christopher Lee Dracula pictures. What a night that must’ve been for monster-loving kids circa 1966.

With both pictures available from Scream Factory, you can recreate that evening in the privacy of your own home. And I bet they’ll look better in your living room than they did at your local drive-in back in ’66. Arthur Grant created some great color lighting effects for The Plague Of The Zombies, similar to what Jack Asher had before him at Hammer. The improved color makes all the Hammer Blu-Rays essential stuff for fans of these things — remember, color was the main selling point with these pictures. Shout Factory gives us a slew of tasty extras, with my favorite being a short documentary on the making of the picture. Time has been kind to these movies. They seem better than ever. Shout Factory’s been kind to them, too. They look better than ever. Highly, highly recommended. 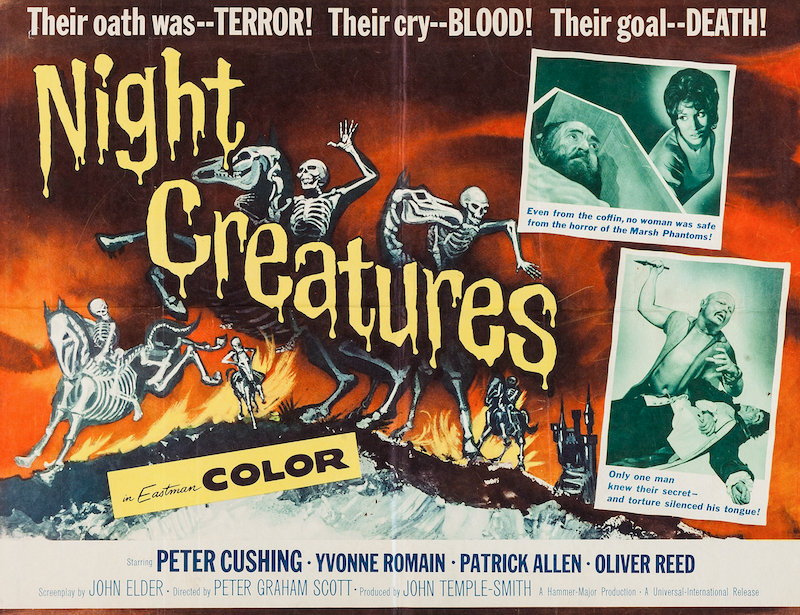 What if Heaven was a place where you’ve got a stack of old movies starring, or made by, all your favorites — that you’ve never seen? Like maybe another couple Scott-Boetticher Westerns, a second George Lazenby Bond movie — or a Peter Cushing Hammer picture you somehow missed while here on Earth. Well, that last little slice of Heaven materialized here in Raleigh, North Carolina, over the weekend. I finally got around to checking out Night Creatures (1962, UK title Captain Clegg).

There’s an interesting bit of history to this one. Hammer Films planned to remake Dr. Syn (1937), which starred George Arliss as the mysterious smuggler Reverend Doctor Christopher Syn — based on the novels by Russell Thorndike. 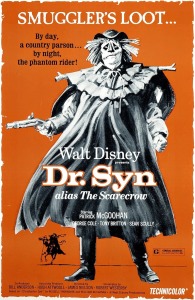 But it turned out that Disney also had their eye on Dr. Syn, for their Wonderful World Of Disney TV show, and had acquired the rights to the novels themselves — versus Hammer’s remake rights to the old movie. Disney’s eventual three-part TV program starred Patrick McGoohan and William Sylvester. (In the mid-70s, it was re-cut and played US theaters as Dr. Syn, Alias The Scarecrow. I thought it was one of the coolest things I’d ever seen.)

Anyway, back to Hammer. To avoid any legal hassle from the Disney people, Hammer changed the character’s name to Captain Clegg and made a few other modifications. There’s still a scarecrow, there’s still plenty of brandy to be smuggled and taxes to be avoided. But we now get the creepy Marsh Phantoms. Stills of the Phantoms that turned up in my monster movie books and magazines had me wanting to see this movie to a ridiculous degree. 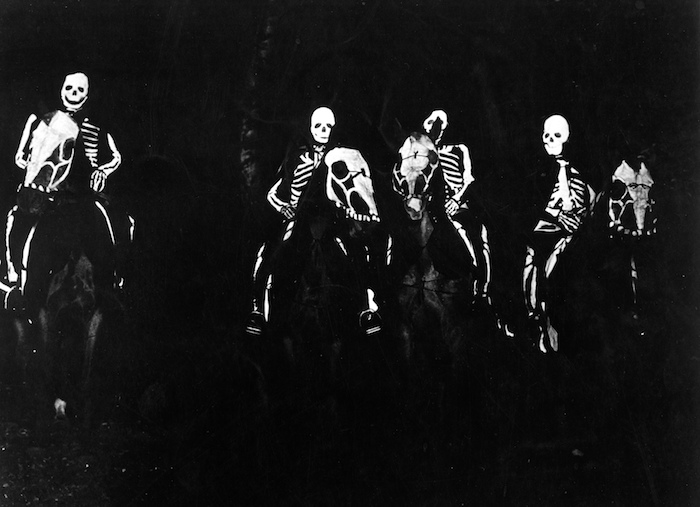 Somehow, it took me more than 40 years to catch up with Night Creatures. But it was worth the wait.

Turns out, it’s not really a horror movie at all, it’s a dark, moody pirate/adventure story. Hammer was pretty good at pirate movies. Their The Pirates Of Blood River, from the same year as Night Creatures and with some of the same cast, is a hoot — and they’d follow it with The Devil-Ship Pirates in 1964. Both star Christopher Lee.

I’m not gonna spoil things by giving you a synopsis. It’s too good a movie for me to screw it up for you.

Night Creatures is Peter Cushing’s movie all the way, in spite of some strong work from Oliver Reed, Michael Ripper (who’s got a bigger part than usual) and the lovely Yvonne Romain. Cushing gets to do plenty of action stuff, which he’s always very good at. It’s shame he’s known these days primarily for standing around and being mean in Star Wars (1977). Cushing is so versatile, and he really gets to show his range in this one, going back and forth from ruthless pirate to compassionate preacher numerous times over the course of the picture’s 82 minutes. Over the last year or so, I’ve developed a real love of Cushing. He’s a joy to watch. 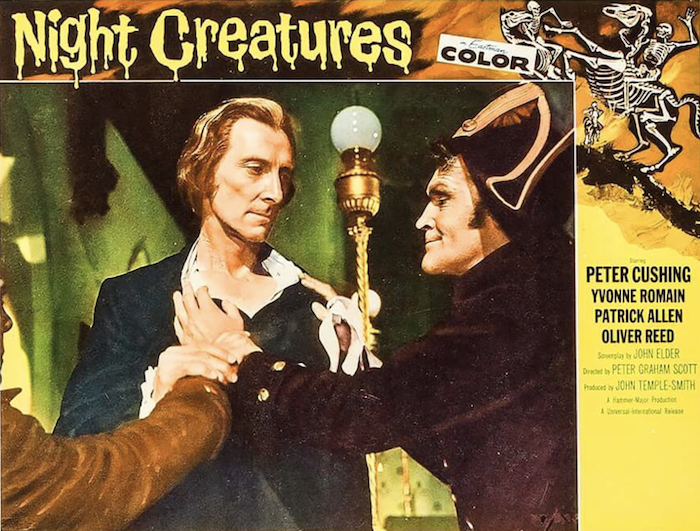 Patrick Allen is appropriately hateful as the government man sent to track down the band of smugglers and clashing with the Marsh Phantoms along the way. The Phantoms’ scenes deliver the goods I’d be waiting decades for — though I’d love to have seen what Jack Asher, Hammer’s other DP, would’ve done with those scenes on the moors. His stylized color effects always knock me out. There isn’t a thing in this movie that isn’t cool. 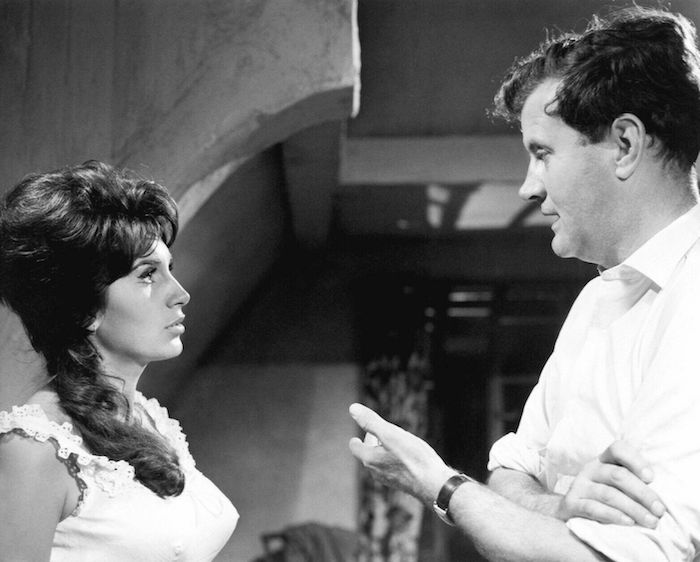 I finally came across Night Creatures in the Hammer Horror 8-Film Collection Blu-Ray set from Universal. It looks great, as do all the other pictures. I saw Hammer’s Phantom Of The Opera (1962) on film repeatedly as a kid, and the spot-on transfer looks exactly as I remember it. Night Creatures gets my highest recommendation. It’s become a new favorite around my house.