Blu-Ray Review: The Shooting And Ride In The Whirlwind (Both 1966).

This was a post I really wanted to get right. There were two previous attempts, which I hated and discarded (to say too much about these movies, in a way, takes away from them). Hope the third time’s the charm.

The backstory. Monte Hellman and Jack Nicholson did a couple of pictures in the Philippines for Roger Corman (Back Door To Hell and Flight To Fury, both 1964). When there was talk of doing something else, Corman asked them to make a Western. That became two Westerns to be shot back-to-back — similar to their Filipino arrangement. The budgets were $75,000 apiece, with  three weeks scheduled for each.

There were plenty of ugly VHS releases before VCI brought them to DVD. That was a great day indeed, and these terrific little Westerns started to find an audience. They’ve been given the red-carpet treatment by The Criterion Collection, with an incredible batch of extras. It took quite a while, but they’re finally getting their due. 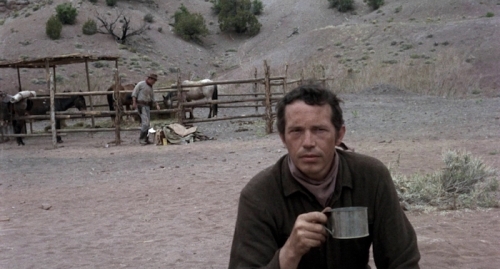 The Shooting was shot first (and I saw it first), so we’ll begin with it. Warren Oates returns to his mining camp to learn that his brother killed a boy in town and fled. Then a mysterious woman (Millie Perkins) appears and pays Oates to lead her to the town of Kingsley, for reasons she won’t share. They begin their trip through the desert, trailed by a lone gunman dressed in black (Nicholson). 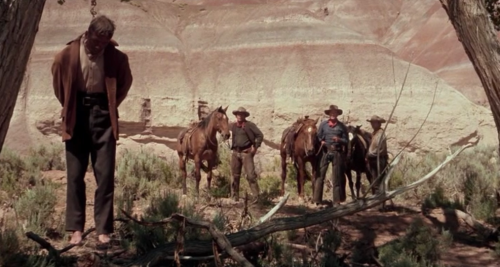 A group of cowboys (Cameron Mitchell, Jack Nicholson and Tom Filer) stumble upon a cabin where Blind Dick (Harry Dean Stanton) and his gang invite them in. The next morning, the cabin’s surrounded by a posse — and the three innocents are instantly wanted men.

The idea in The Shooting of the gunman after someone, we don’t know who, is the backbone of Jack Arnold’s No Name On The Bullet (1959) with Audie Murphy. When it comes to Ride In The Whirlwind, there are plenty of innocent men on the run movies. There’s a fatalist, noir-ish feel to some of both films’ dialogue, but that comparison falls apart, too. These were unlike any Western that came before them — or after them, for that matter.

While most of Roger Corman’s young directors showed promise under his leadership, then went on to do great things, Monte Hellman managed to make two great films while still in the Corman camp. These seem to share the same basic approach as his Two-Lane Blacktop (1971) — a deceptively simple, and purposefully vague, situation is established, and for the rest of the picture, we watch the characters react to that situation. In The Shooting, like Oates, we don’t know what the hell is going on, but we’re pretty sure it’s not going to be good. Ride In The Whirlwind lets us share the desperation of Mitchell and Nicholson. And we don’t get to know the characters of Two-Lane Blacktop because there really isn’t anything to know — they just keep going.

There have been complaints over the years that some of the performances in these Westerns are wooden. The leads seem pitch-perfect to me. Millie Perkins and Jack Nicholson are fine in both. Cameron Mitchell was always dependable, no matter what kind of junk he was in. Will Hutchins is terrific. And Warren Oates was simply one of the best film actors ever, incapable of being less than stellar (and Hellman seemed to draw his best work out of him). 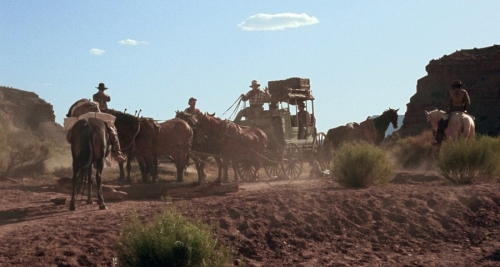 The camerawork from Gregory Sandor is stunning. There was no time or money or crew for lights, so everything was done with natural light. The frame of Oates with the coffee cup, above, from a long take in the first few minutes of The Shooting, sums up these movies for me. The lighting seems real, not Hollywood, and the oddball composition is perfectly imperfect. For some reason, that image has stuck with me for over 20 years.

The new 4K masters done for the Criterion release are some of the best I’ve ever seen, for any movie. Both The Shooting and Ride In The Whirlwind really look like film here, and the color seems rich even though everything is brown and dusty. Just as there was no time or money for lights, there wasn’t much for makeup, either. Millie Perkins didn’t feel she was presented very well in either film, though I disagree. She looks exactly how she ought to look.

While the merits of every film on video should hinge on the film itself, Criterion put together a series of extras that really add to your appreciation of these gems. The commentaries by Monte Hellman, Blake Lucas and Bill Krohn are some of the best I’ve ever heard. They cover everything you’d ever want to know about how these pictures came to be. Even if the films were terrible, their combined production history would be fascinating stuff. The fact that they’re absolutely brilliant makes it all the more special. Adding the package are interviews and short documentaries.

Back when these Westerns looked awful on VHS, they were something to be tracked down and studied, especially for those with a thing for Monte Hellman. This Criterion set, presenting both in stunning quality and with a serious stack of extras, is nothing short of essential. My highest recommendation.

A big thanks to Blake Lucas.

This thing’s been almost impossible to track down over the years — a Roger Corman-directed TV movie deemed too violent for TV and sent to theaters instead (similar to Don Siegel’s The Killers). And now Kino Lorber’s bringing it to Blu-Ray.

This is the only Corman picture I haven’t seen. It pairs Batman‘s Joker and King Tut. It was edited by Monte Hellman and scored by Les Baxter. I can’t wait.

Fred Olen Ray’s Retromedia has been putting some good stuff out on Blu-Ray —from Lugosi Monograms to early AIP stuff and beyond. But it’s really hard to sort out what’s available. Here’s a couple things I’ve tracked down. They’re currently available from Amazon.

Wasp Woman/Beast From Haunted Cave (both 1959)

This one I covered over a year ago. The Wasp Woman was produced and directed by Roger Corman and stars Susan Cabot. It was written by character actor Leo Gordon. The budget was around $50,000. Beast From Haunted Cave was directed by Monte Hellman and written by Charles Griffith. It’s a remake of Naked Paradise (1957) with a monster dropped in the middle of it. These actually played as a double feature back in ’59. 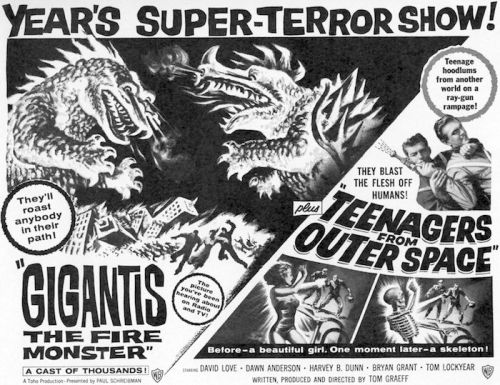 Teenagers From Outer Space/Attack Of The Giant Leeches (both 1959)

Teenagers From Outer Space was an independent picture directed by Tom Graeff and released by Warner Bros., who paired it with the second Godzilla movie.  Attack Of The Giant Leeches was from AIP. Leo Gordon wrote it and Bernard L. Kowalski directed. It stars Ken Clark, Yvette Vickers and Jan Shepard.

Next up: Lugosi and Karloff on Poverty Row.

This one snuck up on me — and with so many great things being announced, one right after another, it was just a matter of time before something would fall through the cracks. Retromedia Entertainment if offering up this terrific twofer, “2 New Thrill Shocking Hits!” from 1959 — The Wasp Woman and Beast From Haunted Cave. The set’s evidently available now.

The Wasp Woman was produced and directed by Roger Corman and stars Susan Cabot. It was written by character actor Leo Gordon. He’s not in it, but his wife Lynn Cartwright is. The budget was around $50,000. Of course, the Wasp Woman in the movie looks nothing like the incredible poster art.

Beast From Haunted Cave was directed by Monte Hellman, who’s since made some superb movies like 1966’s The Shooting and 1971’s Two-Lane Blacktop. It was shot in South Dakota’s Black Hills; the cave is actually an abandoned mine. Written by Charles Griffith, it’s a remake of Naked Paradise (1957) with a monster dropped in the middle of it. Griffith would dust off the story again (complete with the monster) for Creature From The Haunted Sea (1961). That’s one thing you can count on with a Roger Corman movie — the picture might be lousy, but the production history will always be interesting.

Both films are already available on DVD from various sources, usually looking pretty terrible. Retromedia says the both film will be presented widescreen on their Blu-Ray, which is a huge plus. Not sure what their source material is, but the TV prologue for Wasp Woman is supposedly going to be an extra. If anyone sees or hears anything about what these look like, please let me know.

The Film Detective has gathered up three Roger Corman pictures and repackaged them on Blu-Ray at a special price. Sounds like a good idea to me.

A crazy patchwork quilt of a movie. Boris Karloff’s scenes were shot as the wonderful sets for Corman’s The Raven (1963) were being torn down. The rest was made up, with a script by Leo Gordon and Jack Hill, and shot later by a revolving door of cast and crew. It all comes together much better than you’d think, and with repeat viewing almost starts to make some sense. Almost. The Film Detective has this one looking good — and in 1.85 (which AIP called Vistascope).

With just $40,000 and nine days, Francis Ford Coppola made one of the best Psycho ripoffs, even though you can feel the fact that it was written in a hurry. However, Coppola the director saves Coppola the writer.

A goofy/funny/scary little gem of a movie with a rare lead role for Dick Miiler. Of course, he’s terrific. The Film Detective offers it up 1.85, the way it oughta be.

It’s easy to recommend this set. I grew up on these things, and it’s great to see them treated with the respect some people (like me) feel they deserve.

The Mechanic (Dennis Wilson): “You’d have yourself a real street-sweeper here if you put a little work into it.”

The Driver (James Taylor): “You can never go fast enough.”

Filed under 1971, Dialogue Of The Day, Monte Hellman, Warren Oates