This Is Orson Welles — Four Hours Of Him.

Someone tipped me off that, on the internet, you can find some of the interviews Peter Bogdanovich did with Orson Welles — the material that became the essential book This Is Orson Welles.

Click on the photo of Welles and Bogdanovich at the grocery store, and you can feast on four hours of Orson sharing one fascinating story after another.

This Is Orson Welles. And It’s His Birthday.

The great Orson Welles was born on this day in 1915. Here he is working on his seedy masterpiece Touch Of Evil (1958) with Russell Metty.

To me, a picture of Welles has to have a camera in it (a cigar is also preferred).

Folks have a tendency to shrug off The Stranger (1946) as a lesser Orson Welles picture. After all, he took it on in an attempt to show he could make a movie according to the Hollywood rules — with the idea that it would put him back on the studios’ collective good side. There are two things wrong with all this. One, while the movie came in a day early and under budget and was indeed a box-office success, it didn’t boost Welles’ employability. And two, to blow off The Stranger deprives you of a really good movie.

Welles is a teacher at a New England prep school, with the supreme good fortune of being married to Loretta Young. He’s also a notorious Nazi war criminal who fled to the States, somehow managing to remove any evidence that might identify him — except for his unusual hobby/obsession: clocks.

Then one day, Nazi hunter Mr. Wilson (Edgar G. Robinson) arrives in Harper, Connecticut — and learns of a school teacher who’s been working on the old church clock in the town square.

Charles Rankin/Franz Kindler (Orson Welles): “Who would think to look for the notorious Franz Kindler in the sacred precincts of the Harper School, surrounded by the sons of America’s first families? And I’ll stay hidden… till the day when we strike again.”

As much as I appreciate Citizen Kane (1941) and The Magnificent Ambersons (1942), I really love the way Welles handled more lurid material like Touch Of Evil (1958), The Lady From Shanghai (1947) and this one. The trappings here are certainly more upscale than the border town in Touch Of Evil, but the deep shadows, striking camera angles and long takes create a similar sinister mood. (Both films were shot by Russell Metty.) Don’t be misled — this is very much an Orson Welles movie.

The Stranger went into the public domain in the 70s, and fans of the movie have been subjected to all sorts of nasty-looking VHS tapes and DVD over the years. To see Welles and Metty’s incredible visuals run through the video thrashing machine is a heinous thing indeed. I’m happy to report that the Blu-Ray from Olive Films looks fine. It’s not gonna be the thing you throw on when you want to show the neighbors how nice your TV is, but it lets you appreciate the rich contrast and deep focus that make the movie as effective as it is. There are other Blu-Rays of the picture out there, and while this one’s a tiny bit softer than some of the others, it’s a bit darker, too — which seems more in line with how the film should look. The grain’s there, as it should be. The audio is sharp and clear. Extras include an audio commentary by Nora Fiore and the original trailer.

This is a nice package — and a really terrific movie (that made a huge impact on me as a kid). Highly, highly recommended.

In a way, Orson Welles’ The Stranger (1946) is a better movie if you don’t know anything about it. Because if you come at it free of all the stuff film snobs turn their noses up at — Welles did it to prove he could make a “regular” Hollywood movie on time and on budget, his input into the script was limited, etc. — you’re treated to a very good noir-ish thriller filled with the touches that make Welles’ pictures so special. 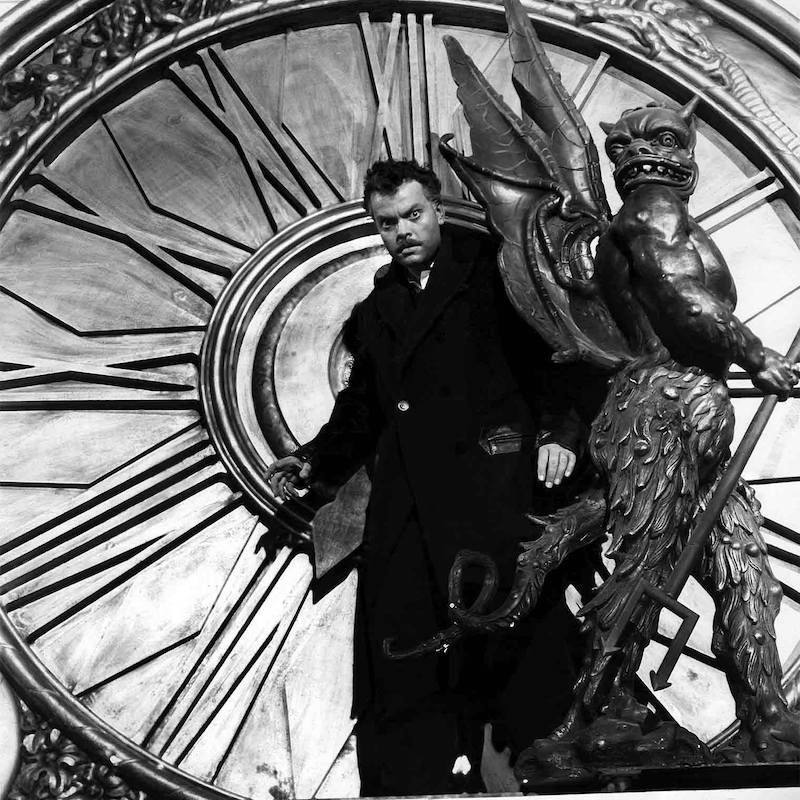 Welles is a prep school teacher being pursued by a Nazi hunter (Edward G. Robinson). That’s about all you need to know other than that Russell Metty shot it, and he and Welles have a real field day. It’ll be great to see Metty’s gorgeous work, and the incredible sets by Perry Ferguson (who did Citizen Kane), in high definition when Olive Films’ Blu-Ray gets here.

It’s interesting to imagine what the movie would’ve been like if Welles had been allowed to cast Agnes Moorehead as the Nazi hunter! 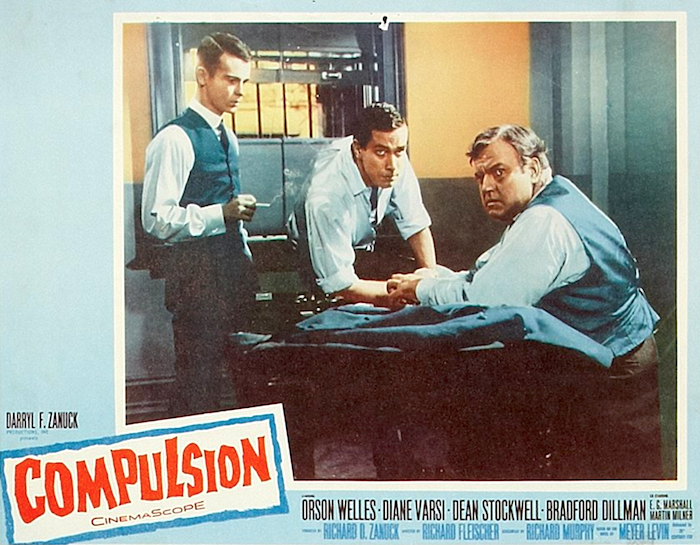 This Is Orson Welles’ 100th Birthday.

The great Orson Welles was born on this day in 1915. Here he is working on his seedy masterpiece Touch Of Evil (1958).

With that film, and with Welles himself, Hollywood didn’t know what they had.

This Is Orson Welles… At The Grocery Store.

Been re-reading (for maybe the tenth time) Peter Bogdanovich’s This Is Orson Welles. What a great book. I was looking up Welles’ quote on Tim Holt, and the next thing I knew, I’d started again at the beginning.

I love this photograph. 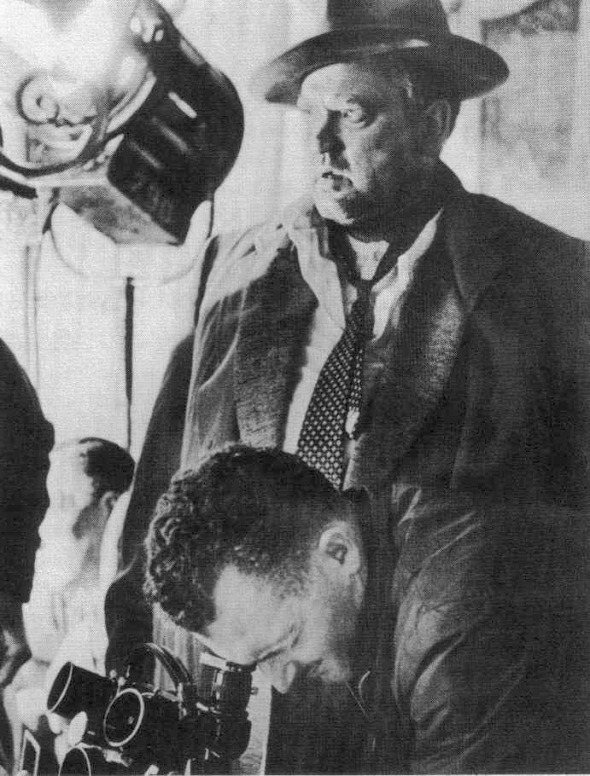 Orson Welles’ Touch Of Evil (1958) is unlike any film I’ve ever seen. It’s highbrow and lowbrow at the same time, as Welles put his masterful cinematic stamp on a most lurid story. To me, it’s a true masterpiece, an incredible stylistic exercise, while a friend called it the skankiest movie they’d ever seen. Maybe we’re both right.

Valentin De Vargas (back to camera) with Welles on the set. Though most of credits are in TV, De Vargas worked for three of my favorite directors: Welles, Howard Hawks (Hatari!, 1962) and William Friedkin (To Live And Die In L.A., 1985). 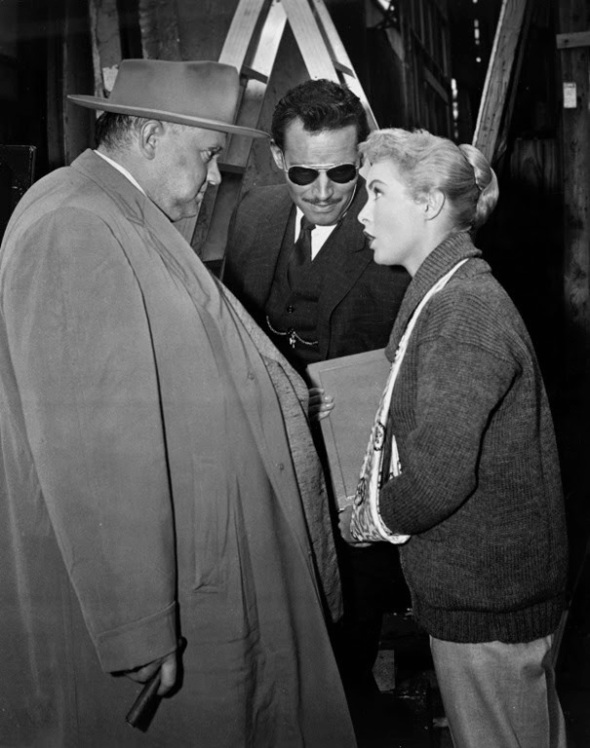 Here’s Welles with Charlton Heston and Janet Leigh. Note the sling: Leigh broke her arm a week before rehearsals. In the finished film, her arm is obscured by sweaters and other things quite a bit.

This shows us of what Welles looked like during production. It’s easy to imagine him being as big and slovenly as Hank Quinlan. This was just 17 years after Welles the wunderkind made Citizen Kane (1941). Wish I could’ve found a shot of Dennis Weaver between takes. 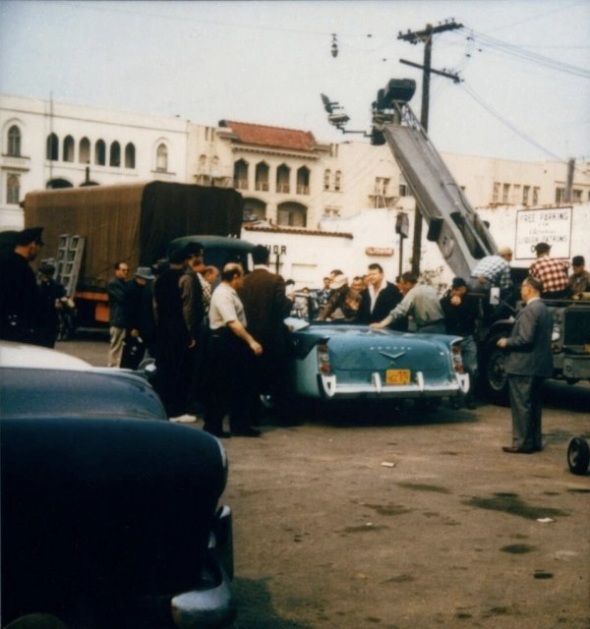 How cool is this? Color! Welles is directing the opening single-shot bomb-in-the-car sequence. That crane’s about to get a real workout.