The next-to-last Republic serial, Panther Girl Of The Kongo (1955), is coming to DVD and Blu-Ray from Olive Films.

Stock footage was the order of the day in the final years of Republic serials, and this one lifts liberally from Jungle Girl (1941) starring Frances Gifford. What really sets Panther Girl Of The Kongo apart are the always-terrific Phyllis Coates and the really cool giant crayfish (here in North Carolina, we call them crawdads). I guess Hollywood’s big bug trend (Them!, Tarantula, The Deadly Mantis, The Black Scorpion) infested the Republic lot — and it’s all brought to life by the genius of Howard and Theodore Lydecker. They built scale jungle “sets” and turned real crayfish loose on them.

It all makes for a really fun serial that comes highly recommended. 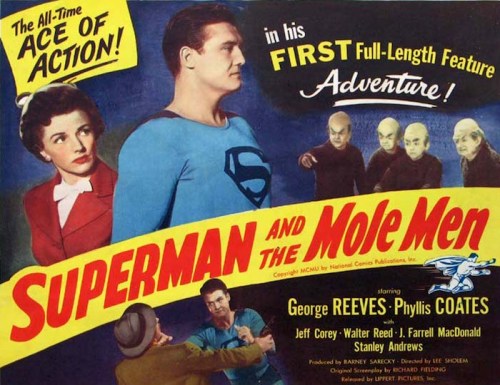 Judging from what little I’ve seen of them, the comic book movies they churn out these days aren’t my cup of tea. Far from it. Superman And The Mole Men (1951) is more to my taste. (For what it’s worth, my other favorite comic book/strip movies are the first Blondie feature, Dick Tracy Meets Gruesome,  The Lone Ranger with Clayton Moore, the 1966 Batman feature, Mario Bava’s Danger: Diabolik and The Rocketeer.)

Clark Kent and Lois Lane travel from Metropolis to Silsby to do a story on the world’s deepest oil well. Out of that hole come the mole men, a group of maybe-radioactive midgets in furry suits and bald wigs who live in the center of the earth. The frightened townspeople, led by Jeff Corey (who’d soon be blacklisted), try to get rid of them, but Superman saves the day (along with the mole men).

Superman: “You’re not going to shoot those little creatures. In the first place, they haven’t done you any harm. In the second place, they may be radioactive.”

Superman And The Mole Men kinda served as a pilot for the Superman TV series — and it would be split in half to create a two-part episode to wrap up the show’s first season. The movie’s the first time we see George Reeves as Clark Kent and Superman, and Phyllis Coates as Lois Lane. Shot (in a hurry) on the RKO-Pathé lot, it made use of some oil derricks down the street. Lippert Pictures released the feature, and the TV show would go into production not long after. Director Lee Sholem did a number of the episodes, too. 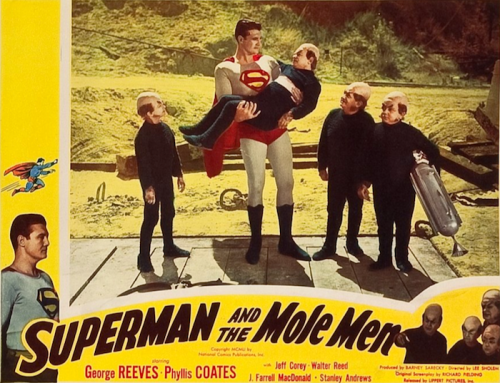 It’s a cheap affair, to be sure. The mole men’s weapon appears to be a vacuum cleaner (Electrolux, perhaps?) with a funnel attached to one end. Superman doesn’t have all that much screen time, with much of the picture’s 58 minutes devoted to a couple of mole men trying to outrun the citizens of Silsby. But, Superman And The Mole Men has the distinction of being the first feature film based on a DC comic book. (I’m not counting the Batman and Superman serials.) And there’s a ragged charm to it you’ll never see in the big-budget, computer-effects-laden movies of today.

On DVD, Warner Bros. added Superman And The Mole Men to the first season of the Adventures Of Superman TV show, which also includes the two-episode version. Highly recommended.