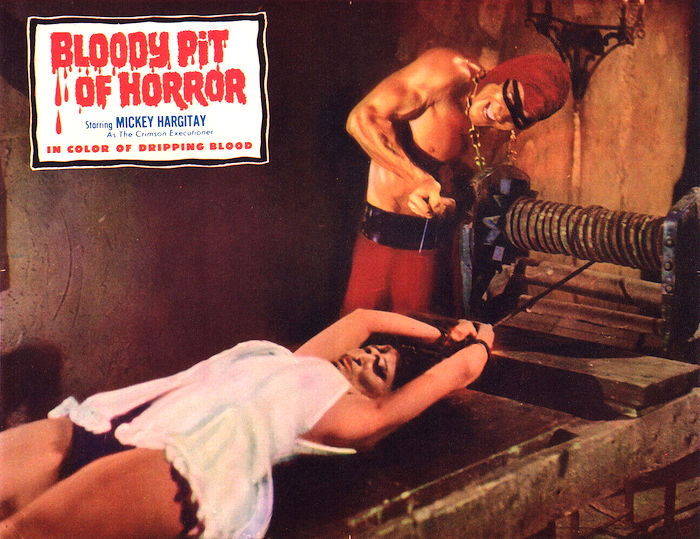 If you’re looking for about an hour and a half of 60s Italian horror/peplum weirdness, you won’t do much better than Massimo Pupillo’s Bloody Pit Of Horror (1965). It’s got Mickey Hargitay in a wonderfully whacked-out performance as The Crimson Executioner, dragging a number of Italian beauties to his torture chamber to satisfy his vile desires. This is easily one of the most flat-out crazy movies I’ve ever seen.

Severin Films is bringing it to Blu-Ray with a 2K scan of the uncut camera negative, padded out with a nice slate of extras. Certainly not for all tastes, but if you’re a fan of such nonsense, this one comes highly recommended.

Severin Films has announced The Eurocrypt Of Christopher Lee Collection, an exhaustive eight-disc set coming out May 25.

The Castle Of The Living Dead (1964)
Directed by Warren Kiefer
Starring Christopher Lee, Gaia Germani, Philippe Leroy, Mirko Valentin, Donald Sutherland
Lee plays a 19th century Count who lets a theatrical troupe spend the weekend in his creepy castle. As you’d expect, it would’ve been better if they’d turned down his invitation. 4K restoration from the Italian negative; English audio.

Challenge The Devil (1963, AKA Katarsis)
Directed by Giuseppe Vegezzi
Starring Christopher Lee, Giorgio Adrisson, Vittoria Centroni
One of Lee’s most obscure films. He turns out to be the devil. 2K restoration from the Italian negative; Italian audio. 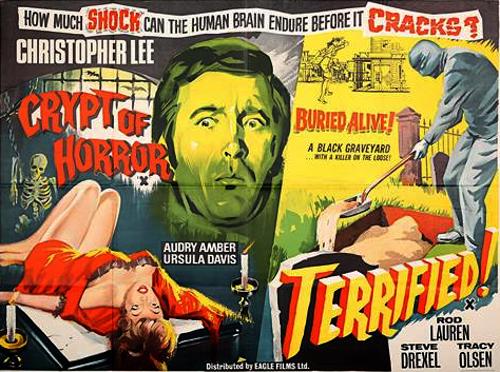 Crypt Of The Vampire (1964, AKA Terror In The Crypt and Crypt Of Horror)
Directed by Camillo Mastrocinque
Starring Christopher Lee, Adriana Ambesi
Another adaptation of Sheridan Le Fanu’s Carmilla, with Lee as Count Karnstein. 2k restoration from a fine-grain 35mm master print; Italian and English audio.

Sherlock Holmes And The Deadly Necklace (1962)
Directed by Terence Fisher
Starring Christopher Lee, Thorley Walters, Senta Berger
Lee and director Terence Fisher follow Hammer’s The Hound Of The Baskervilles (1959) with Sherlock Holmes And The Deadly Necklace, giving Lee and chance to play the world’s greatest detective. (It was Peter Cushing in Hound.) Written by Curt Siodmak, based on Sir Arthur Conan Doyle’s The Valley Of Fear. 2K restoration from the German negative; English & German tracks.

Theatre Macabre (1971-1972)
Christopher Lee hosts an anthology TV series, providing and intro and wrap-up for each episode. 24 surviving episodes have now been scanned in 2K from the original negatives.

The Torture Chamber Of Dr. Sadism (1967, AKA The Blood Demon, The Snake Pit And The Pendulum, Castle Of The Walking Dead)
Directed by Harald Reinl
Starring Christopher Lee, Karin Dor, Lex Barker
Count Regula (Christopher Lee) is executed for killing 12 virgins in his dungeon. Years later, he comes back for revenge. 4K restoration from from the original German negative; English and German audio.

Relics From The Crypt
A collection of interviews with Lee over the years and other related horror featurettes.

In addition to the Relics From The Crypt disc, each disc is packed full of extras, from commentaries and interviews to trailers and still galleries. There’s a CD of Angelo Francesco Lavagnino’s score for The Castle Of The Living Dead, and an 88-page illustrated book by Lee biographer Jonathan Rigby. This is really gonna be something. Highly, highly recommended.

I’m sure I’m not the only kid who caught Jack The Ripper (1959) on TV and has had a fascination with the murders ever since. Back then, researching a subject wasn’t as simple as typing a few words into Wikipedia, and I’ve got a stack of Ripper books to prove it.

Since Jack The Ripper was never caught, a book or movie or whatever can go wherever it wants, presenting its own theory of what happened — or just using the basic story as a springboard for a bit of violence and sex. This movie sticks to the usual path, and its “solution” is in line with some of the common theories from the “experts.” The Ripper scenes are very well done, and they do a pretty good job of concealing the fact that they walk along the same Whitechapel street set over and over again — the fog machine guy sure worked overtime.

My favorite Ripper picture is Murder By Decree (1978) and this one comes in second. Its Hammer-ish feel — courtesy of writer Jimmy Sangster and producers/directors Robert S. Baker and Monty Berman, who’d done Blood Of The Vampire the year before — suits the subject matter perfectly. 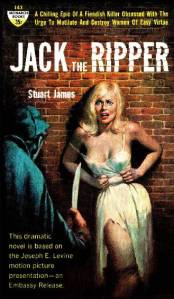 I’ve never seen Jack The Ripper look good, so I was really eager to see how the Severin Blu-Ray turned out, knowing they’d gone to great lengths to find some nice material to work with. And I was hoping to get a lesson in how the various versions of the picture came to be. And while this isn’t a shining example of everything a Blu-Ray can be, it does show what dedication and hard work can accomplish.

So here’s the back story. Joseph E. Levine made a fortune buying foreign films, sprucing them up for American release, and filling theaters through masterful advertising campaigns. Two of his biggest successes were the US versions of Godzilla, King Of The Monsters (1956) and Hercules (1958). Jack The Ripper was given the same treatment.

Wth the Severin Blu-Ray, you get the British cut of the picture, looking pretty good, but cropped to 1.33. Then there’s the US version in its proper aspect ratio, transferred from a vintage, well-used print found in the Library Of Congress. (Wow, Congress is good for something!) It’s got some lines and splices, and the color insert is there. (I actually like seeing an old movie look like it’s been run a few times — that’s how they usually looked when I first saw them.) In short, Severin did a very nice job with somewhat compromised material. 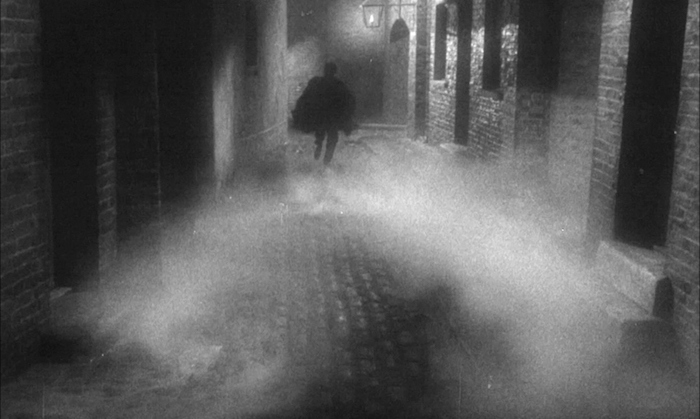 Of the two, I prefer the US one. The widescreen framing is a huge plus, it’s cool to hear Paul Frees over the Paramount logo, and the music is the score I know from the soundtrack LP.

There was a third version — a cut for the rest of Europe with some extra violence and a bit of nudity tossed in for good measure. Some of those scenes are included in the supplemental stuff. You also get a nice little documentary, the US trailer, an expert interview and a still gallery. A nice package.

But for me, however, the real treat is bringing this Ripper out of the fog after all these years. For that, I’m certainly grateful. Highly recommended. 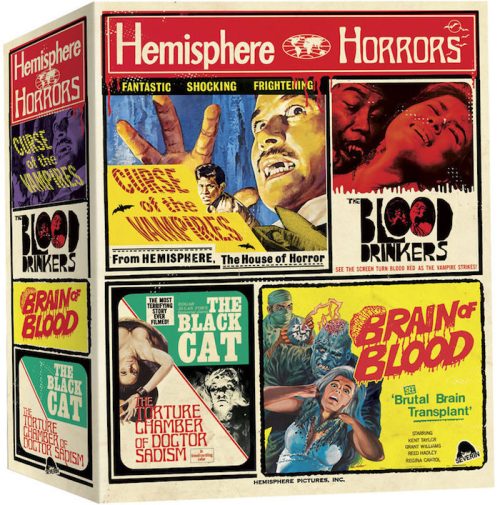 You know, anybody can do a 4K scan of some perfectly-preserved studio picture made 10 years ago — or do what little is needed to put last summer’s digitally-shot blockbuster on a silver circle. But to take some cheap little independent, international piece of junk — that’s been beaten to crap wherever it’s been reposing for the last 40 years — and make it look as though it was made yesterday, well, that’s really doing something.

And that’s why I thank God for folks like Severin Films. With their upcoming The Hemisphere Box Of Horrors Blu-Ray set, they take a handful of films from Hemisphere and give them the love and respect few people would say they deserve.

The Blood Drinkers (1964, AKA The Vampire People)
Directed by Gerry De Leon
Starring Ronald Remy, Amalia Fuentes, Eddie Fernandez, Eva Montes
Some of this Filipino vampire picture was shot in black and white, some in color. The B&W scenes were tinted in various shades and promoted as “blood-dripping color.

Curse Of The Vampires (1966, AKA Blood Of The Vampires)
Directed by Gerry De Leon
Starring Amalia Fuentes, Romeo Vasquez, Eddie Garcia
There’s a woman chained up in the dungeon of a jungle mansion. Turns out she’s a vampire who bites her son — and soon the entire family is on the prowl for blood.

Brain Of Blood (1971, AKA The Creature’s Revenge, The Oozing Skull, The Undying Brain)
Directed by Al Adamson
Starring Grant Williams, Kent Taylor, Reed Hadley, Regina Carrol, Angelo Rossitto
You can always count on Al Adamson for something terrible — and a lot of fun. It’s got everything from brain transplants to torture chambers to chained-up women to sinister dwarfs. Something for everyone. This was Reed Hadley’s last film. 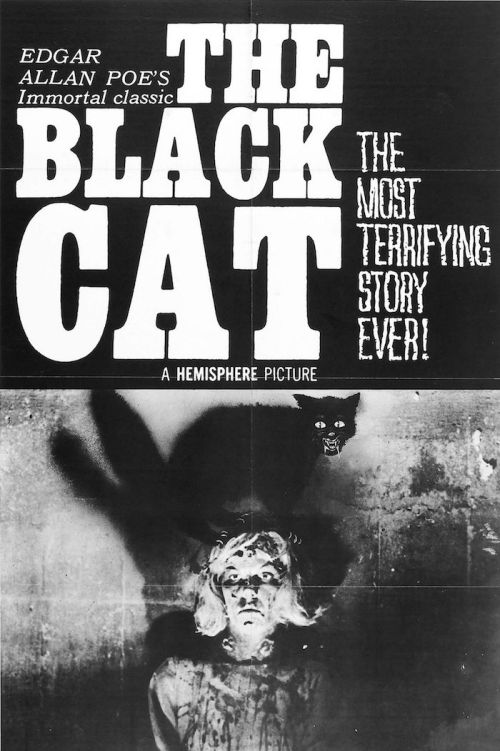 The Black Cat (1966)
Directed by Harold Hoffman
Starring Robert Frost, Robyn Baker, Sadie French, Scotty McKay
This horror picture, shot in Texas, was picked up for distribution by Hemisphere. It was paired with The Blood Drinkers. This is one I’ve been wanting to see for eons. 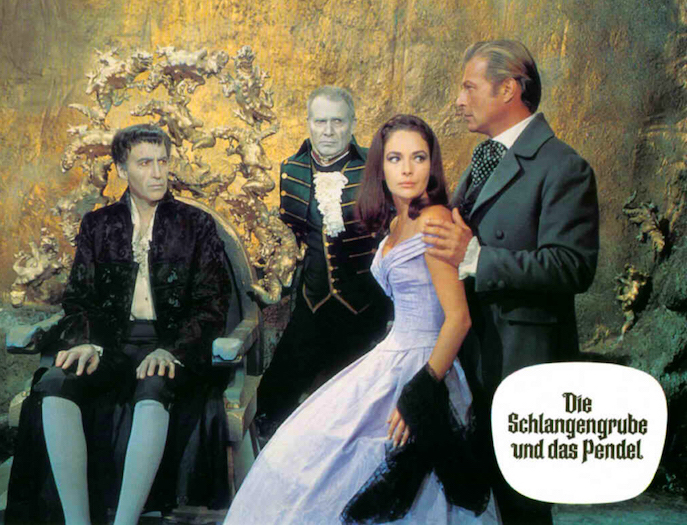 The Torture Chamber Of Dr. Sadism (1967, AKA The Blood Demon, The Snake Pit And The Pendulum, Castle Of The Walking Dead)
Directed by Harald Reinl
Starring Christopher Lee, Karin Dor, Lex Barker
Count Regula (Christopher Lee) is executed for killing 12 virgins in his dungeon. Years later, he comes back for revenge. This West German production, co-starring Karin Dor and Lex Barker, is a lot better movie than it’s plethora of lurid titles would indicate. (The Torture Chamber Of Dr. Sadism has to be one of the greatest movie titles of all time.) This one and The Black Cat are exclusive to this set and will not be sold separately.

All these pictures will get the usual Severin treatment with lots of extras — interviews, cut scenes, trailers and more. For those of us who can’t get enough of these things, highly recommended.

Severin Films has announced an August Blu-Ray release — with a 2K restoration and plenty of extras — of Del Tenney’s The Horror Of Party Beach (1964). Shot in two weeks for around $50,000 outside Stamford, Connecticut (and released by 20th Century-Fox), it’s a really terrible spoof/ripoff of the monster and beach party movies AIP was turning out at the time. And you don’t want to miss it.

This is not to be confused with The Beach Girls And The Monster, shot on the West Coast and released the next year (1965). It’s maybe a tiny bit better, or less bad, but it features the surf band The Hustlers, and they’re terrific. Who’s gonna offer up that one in high-def?

As I see it, The Changeling (1980) was one of the last really good horror movies. It’s just old-fashioned enough, while plenty modern — and it’s certainly scary. There’s even a strong murder mystery vibe to it. It’s really terrific.

George C. Scott’s a composer who, after his family is killed in an accident, moves into a Seattle mansion. It doesn’t take him long to figure out that something’s going on in his new home. Turns out Scott’s sharing his digs with the ghost of a murdered little boy, and that’s all you’re gonna get out of me.

Scott’s excellent, but the rest of the cast is just as good. Peter Medak’s direction and John Coquillon’s camerawork give us plenty of atmosphere, and Russell Hunter’s story is based on stuff he actually experienced in a mansion in Denver.

Severin has announced an upcoming extra-packed Blu-Ray of The Changeling, from a new 4K restoration. It’s also playing in New York this week.

I love haunted house movies — The Uninvited (1944), Robert Wise’s The Haunting (1963) and Legend Of Hell House (1973). The Changeling can hang with those heavyweights with no trouble. This upcoming Blu-Ray seems like a must. 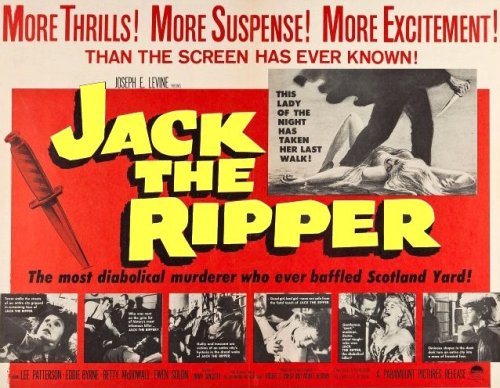 Our friends at Severin Films have put together a killer Blu-Ray edition of the 1959 exploitation classic Jack The Ripper (1959) — that includes three versions of the movie: the British Version from a 1080 telecine, the U.S. Version from a 2K scan of an archival print, and on a bonus DVD, the European Version pieced together from the British Version and the only known tape source of the racier/gorier scenes (the original film elements have evidently been lost). 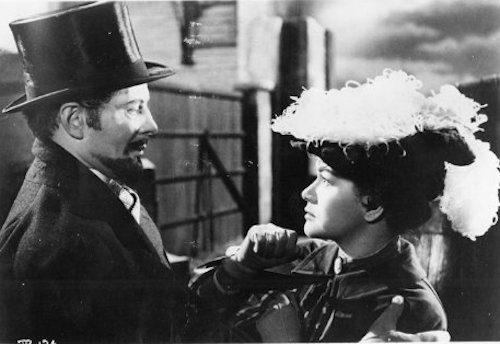 There’s also a slew of extras. Oh, that bonus DVD is part of a limited (1,500 copies) Black Friday edition, so put down the Thanksgiving leftovers, stay away from the mall, and be sure to order one before they’re gone. David Gregory has been working on this title for quite a while, and it’s gonna be terrific.