Here’s wishing a happy birthday to Stella Stevens, an actress who was often wonderful — and always under-appreciated.

Working on a commentary for her picture Rage (1967) recently, I’ve been reminded again and again of how good she is. She’s seen here in The Silencers (1966), the first of the Matt Helm movies starring Dean Martin. She easily walks away with the movie.

Imprint out of Australia has brought out some terrific stuff in recent months, and they’re shining a light on Rage (1967), a film that’s spent way too much time stuck in the dark. This Blu-Ray will be a worldwide first.

Rage is a solid suspense picture. Glenn Ford’s a doctor in a remote construction camp in Mexico. He’s bitten by a rabid dog and has to race to a hospital for the vaccine. Ford is as good as ever, and Stella Stevens is terrific as an “entertainer” who comes to the camp and takes a liking to the doctor. David Reynoso and Jose Elias Moreno are both excellent.

Rage (it was called El Mal in Mexico) was the first true Mexican-American co-production. It was shot entirely in Mexico, in English. And it was one of the first handful of pictures to wear the “Suggested For Mature Audiences” badge in its advertising. 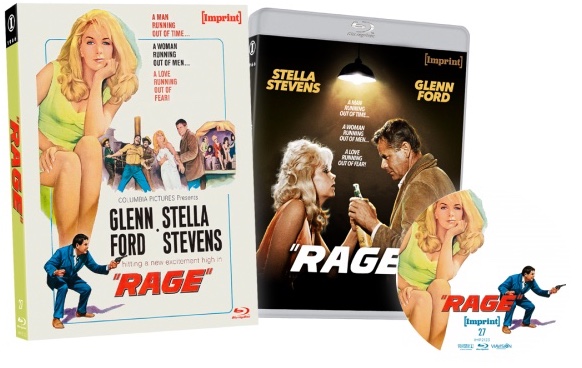 It’d been decades since I’d seen Rage, and I was really knocked out by it. Recommended.

Here are some behind-the -scenes shots of the terrific model work for The Poseidon Adventure (1972).

Getting ready for the wave to tip over the model ship.

A diver works on the model, post-wave.

It’d been years since I’d seen it, and my entire family watched it the other night. It holds up well — the movie, not the ship. One of the things that really makes the movie work, aside from performances that help us get past the soap-opera first couple reels, are the incredible upside-down sets. They sent me looking for some making-of images immediately, but about all I found were these model images.