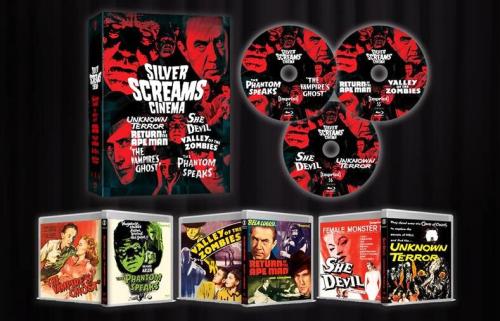 Imprint has announced their upcoming Silver Screams Cinema Collection, six pictures (complete with extras) on three Blu-Ray discs. You might dismiss this as a bit of a random, grab bag assortment of old horror movies. But that downplays all the cool stuff that’s in here — some Republic stuff, one of Bela Lugosi’s Monogram Nine and a couple of Regalscope pictures. You get: 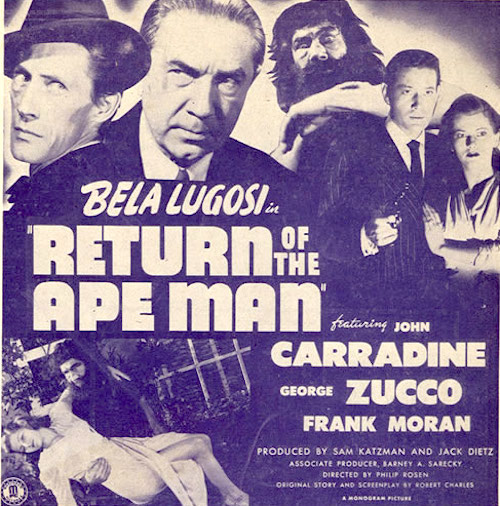 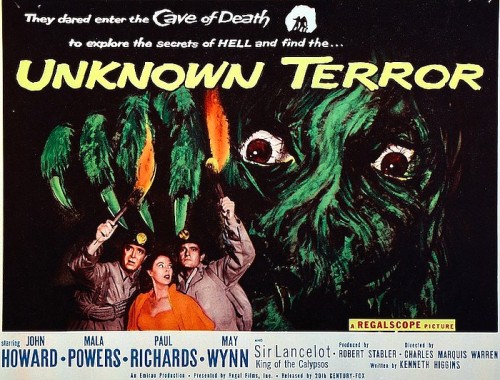 To me, the real jewel here is the last film, Unknown Terror, a pretty solid Regalscope picture. You won’t find this one in widescreen anywhere else, and having it in high definition is an added treat. It’s a pretty good example of the ultra-cheap Regal films. It concerns mutants and rampant fungus — and has a good part for the lovely Mala Powers.

Imprint always does really nice work, so you can count on this set being top-notch. Recommended. 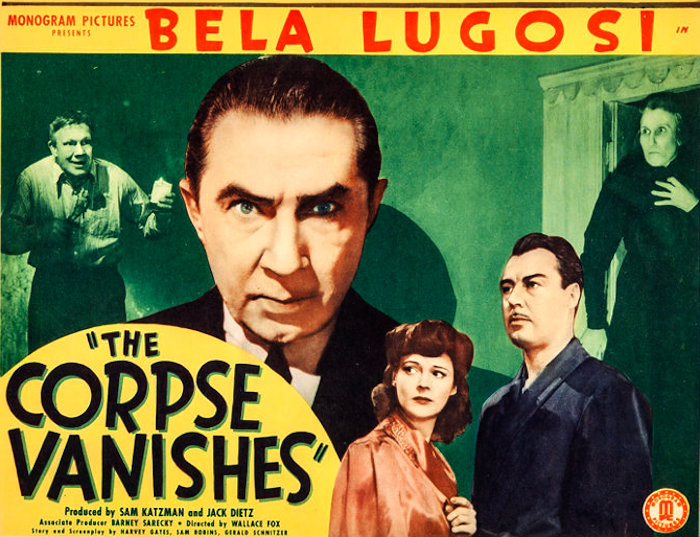 No matter where you look these days, the United States is falling apart, so it seems like the perfect time for The Corpse Vanishes (1942). One of Bela Lugosi’s Monogram Nine, its glorious nonsense is a nice alternative to the hideous, venomous nonsense just oozing out of every pore of our society. 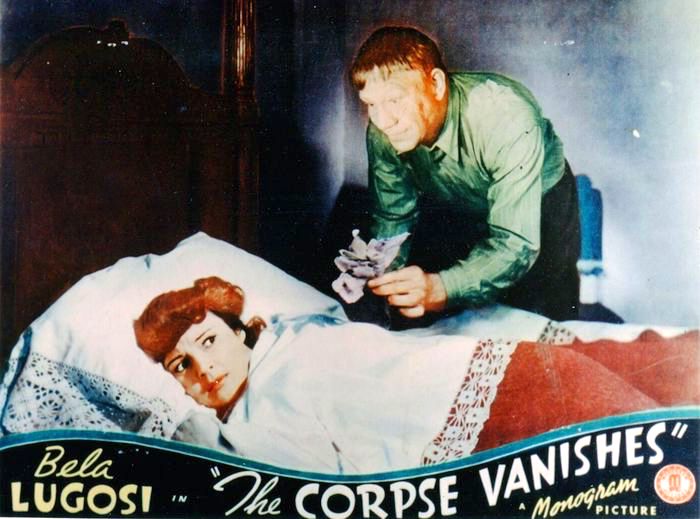 Brides are collapsing at the alter, then they disappear during their ambulance ride. A spunky girl reporter (the lovely and tragic Luana Walters) discovers that all the unfortunate brides wore the same odd-smelling orchid, which leads her to Dr. George Lorenz (Lugosi), an authority on orchids — and a mad scientist who’s using the young girls to create a serum to keep his wife, Countess Lorenz (Elizabeth Russell), young and beautiful. 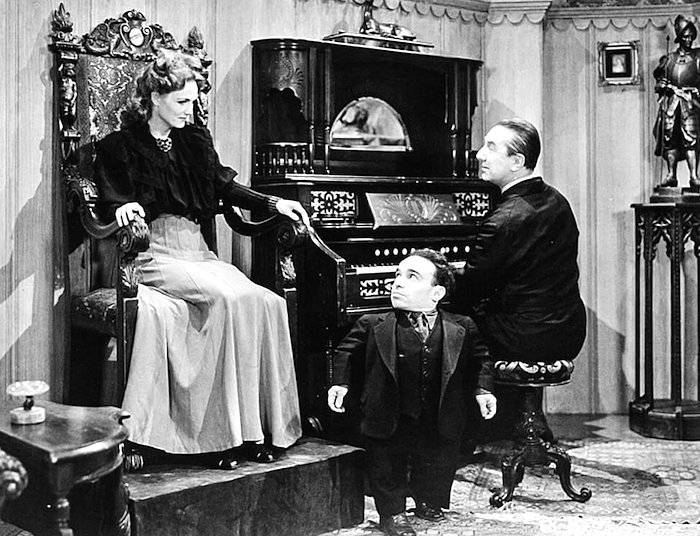 Toss in a family of freaks that lives in Lugosi’s basement, and the fact that Lugosi and Russell sleep in his-and-hers coffins, and you’ve got The Corpse Vanishes. It’s not a scary movie, but it has a real creepiness about it, thanks to its overall air of extreme weirdness and dread — along with a typically committed performance from Lugosi. As crazy as it may sound, this is one of the more coherent and logical of Lugosi’s Monogram Nine.

Speaking of being coherent, a guy once told me he thought the brides were alive, not dead. Well, the title is  The Corpse Vanishes, and when Luana Walters finds them, they’re in drawers like the morgue, so I stick to the dead idea. Besides, if they aren’t dead, why does Lugosi have to keep getting more of ’em? 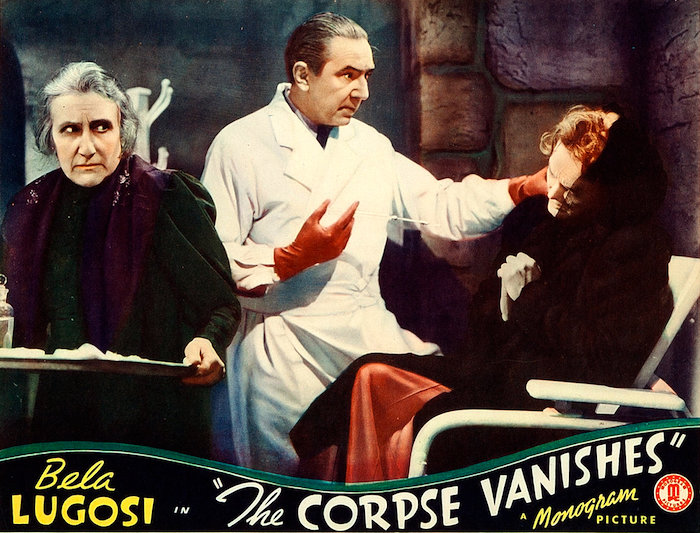 Dr. George Lorenz (Bela Lugosi): “You are beautiful. And I shall always keep you that way.”

Since every copy of The Corpse Vanishes you see is a varying degree of bad (warning: the Blu-Ray is not an upgrade), it’s hard to get much of an idea of what Arthur Reed’s camerawork looks like. It’s hurried, for sure — shooting began in early March, and the picture was in theaters the week in May. Reed spent his entire career shooting pictures for tiny little studios like Tiffany, Argosy and Cameo — and places we’ve heard of like PRC and Monogram. Wonder what the longest schedule he ever had was? If it was more than two weeks, I’d be surprised.

Director Wallace Fox toiled on Poverty Row a lot, too, though he worked for Universal, RKO and Columbia from time to time. He started out at the end of the silents, making cheap Westerns. That continued with talkies, starring guys like Tom Tyler, Jack Randall, Grant Kirby, Tex Ritter and William Elliott. Powdersmoke Range (1935) with Harry Carey and Hoot Gibson is a good one. In the 40s, came the East Side Kids and Bela Lugosi pictures. Pillow Of Death (1945) with Lon Chaney, Jr. is part of Universal’s Inner Sanctum series. He made his way to TV in the 50s, and after a 1954 episode of Annie Oakley, he retired.

The producer was one of my heroes, the great Sam Katzman, who was cranking out glorious junk like this by the train car load. He produced seven movies in 1942; Lugosi was in three of them.

So, with the world a big fat ball of despair, The Corpse Vanishes provides 64 minutes or rather grim, delirious fun. And an escape from a time that sure can use some escaping from. For that, Mr. Fox, Mr. Lugosi, Ms. Walters and Mr. Katzman, I can’t thank you enough. 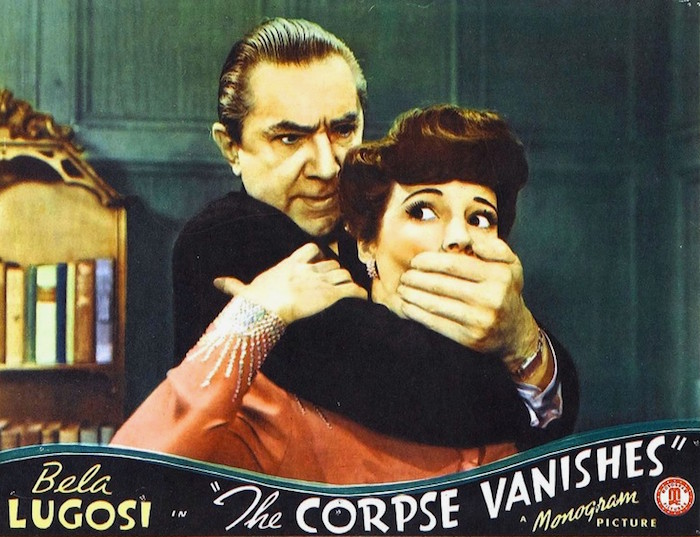 Fred Olen Ray’s Retromedia Entertainment Group has been bringing some cool stuff to Blu-Ray — including a few great pictures scooped up from Poverty Row.

The Corpse Vanishes/Bowery At Midnight (both 1942)
A couple of Lugosi’s Monogram Nine — these were both produced by Sam Katzman and directed by Wallace Ford. In The Corpse Vanishes, he’s a mad scientist working to preserve his wife’s beauty. In Bowery At Midnight, Lugosi uses a soup kitchen to find guys for his gang of crooks. In the climax, all the guys who’ve been killed along the way come back to life. Great stuff. 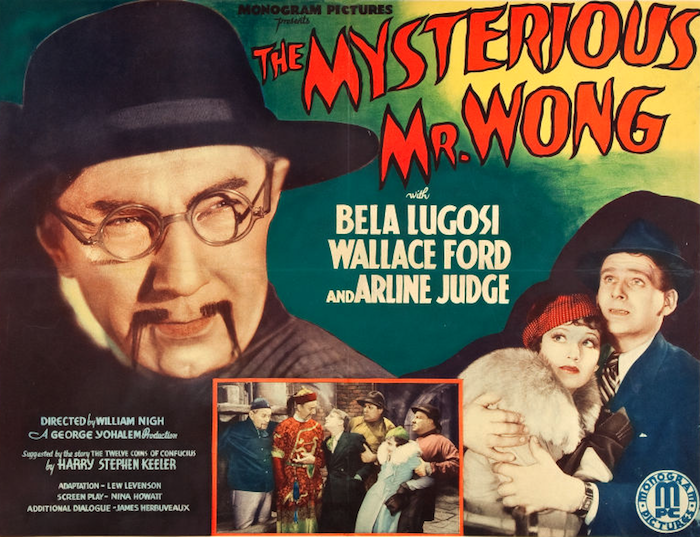 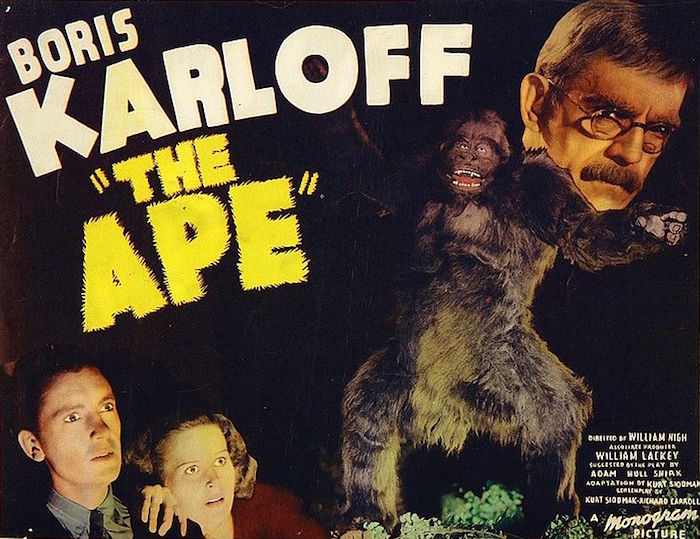 The Ape (1940)/The Black Raven (1943)
Boris Karloff had his own Monogram Nine, and The Ape was the last of them. He’s another mad scientist, this time trying to cure polio. At the same time, an ape escapes from the circus. The Black Raven is from PRC, directed by Sam Newfield and starring George Zucco, Robert Livingston and Glenn Strange.

You know, when cheap little movies like this become available in high definition, maybe the world ain’t so bad after all.

The Monogram Nine, a handful of low-budget pictures Bela Lugosi made for Sam Katzman and Monogram Pictures in the mid-40s, are nobody’s idea of quality cinema, but they’re certainly entertaining. Some say Return Of The Ape Man (1944) is one of the worst of the bunch, but so what — it’s a blast. 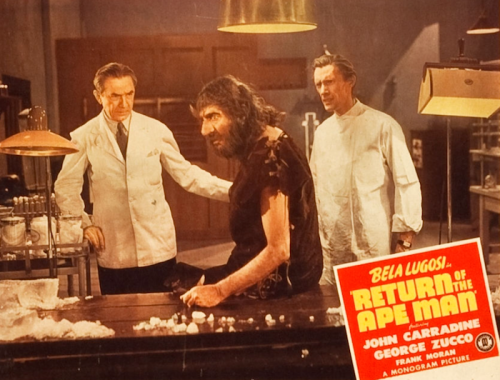 Bela Lugosi is Professor Dexter, a noted scientist messing around with freezing people. He and his assistant, Professor John Gilmore (John Carradine), thaw out a bum they’ve had frozen in the basement for four months. To prove that people can be kept frozen for extended periods of time, then thawed out safely, Dexter and Gilmore travel to the Arctic in search of a frozen prehistoric man to defrost. They finally find one and bring it back to Lugosi’s basement/laboratory. 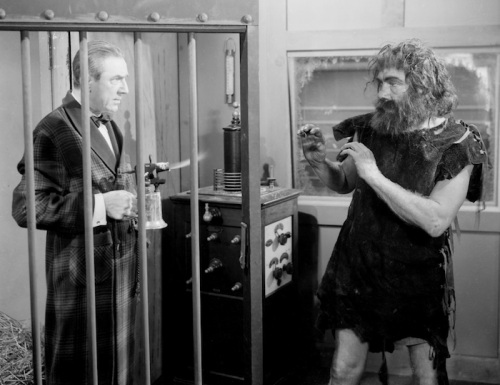 They’re able to revive him — after Lugosi thaws him out with a blowtorch, but soon realize he’s an “unmanageable brute” (I’m lifting a Lugosi line from Abbott & Costello Meet Frankenstein). Lugosi’s solution is to transplant a certain portion of a modern man’s brain into the Ape Man’s skull. From here, Lugosi’s plans go completely off the rails and lead to the kind of supreme mayhem the Poverty Row studios were so good at cooking up. 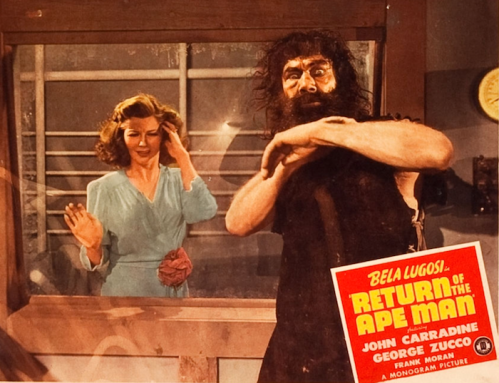 I love Return Of The Ape Man. It’s so ridiculous, so cheap and so short — what’s not to like? Lugosi’s terrific. He always had a way of making the non-logic of these things almost work. Almost. Once John Carradine questions Lugosi’s methods, we just know he’s a goner — but he’s great at doing his John Carradine thing in the meantime. John Moran is a hoot as the Ape Man — bending bars, breaking stuff, choking people, etc. George Zucco was originally given the part, but he got ill and Moran took over. Why Zucco still gets third billing is anybody’s guess. Some say he’s actually in a shot or two (on the table when the Ape Man is first thawed out). Others say it was in his contract. My theory is having three low-budget horror stars in one movie was too good a thing to pass up. Wonder if Zucco was paid for his name on the poster? Philip Rosen’s direction is clunky, for lack of a better word, at least party due to the tight schedule and budget.

I’ve never seen Return Of The Ape Man looking good. And while this Olive Blu-Ray leaves plenty to be desired, this is far and away the nicest version I’ve come across. The contrast and grain are inconsistent, there’s some damage here and there, and it’s a bit soft in places — 16mm, maybe? — but that’s all part of the experience. A movie like this is supposed to look a little ragged, in my opinion, and I’m so glad Olive Films didn’t hold out for better material. It might’ve never happened, and that would be a real shame. This way, every magnificent flaw is preserved in high-definition, which is the way I like it.

Recommended, along with the rest of the Monogram Nine. By this way, this is not a sequel to the previous Lugosi/Monogram picture, The Ape Man (1943). 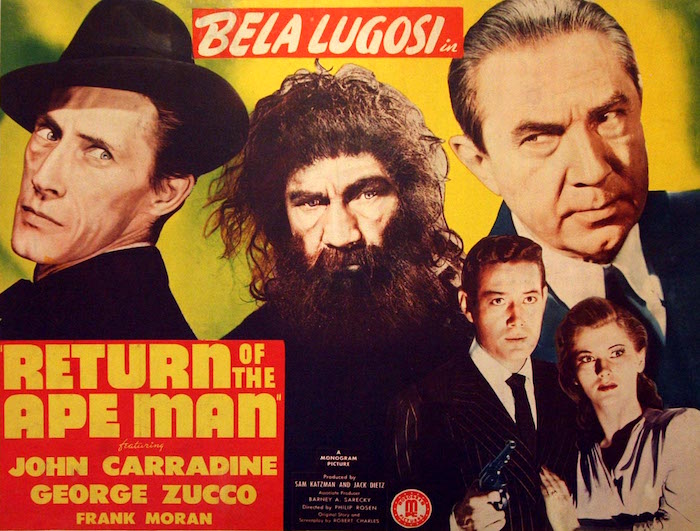 More Poverty Row horror makes its way to Blu-Ray — Return Of The Ape Man (1944), one of the infamous Monogram 9.

The nine pictures Lugosi made for Sam Katzman at Monogram between 1941 and 1944 are filled to the brim with cheesy goodness. To have them turn up in high definition is a dream come true — thanks, Olive! For fans of this kind of stuff, this is absolutely essential. 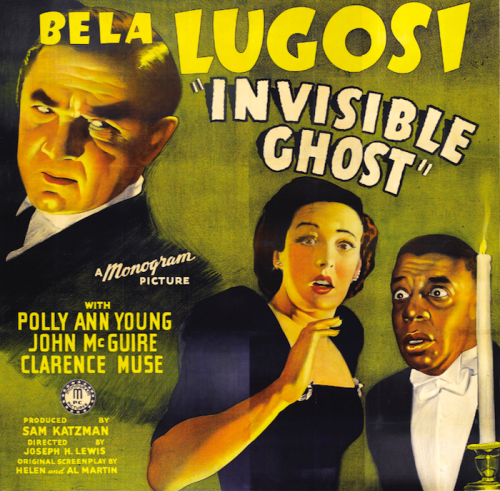 The first of nine films Bela Lugosi made for Sam Katzman and Monogram Pictures, Invisible Ghost (1941) was directed by the great, and greatly underappreciated, Joseph H. Lewis.

You’ll find a strong sense of style throughout Lewis’ work, whether it’s a Randolph Scott picture, the terrific Gun Crazy (1949), an episode of The Rifleman or a cheap horror movie like Invisible Ghost. For that reason alone, Invisible Ghost stands out among the other films Lugosi made on Poverty Row. But it’s got more going for it than that, as we can all see when Kino Lorber releases it on Blu-ray in 2017.

Really looking forward to this one. It’s good to see someone making the effort to bring public domain pictures like this to Blu-Ray.