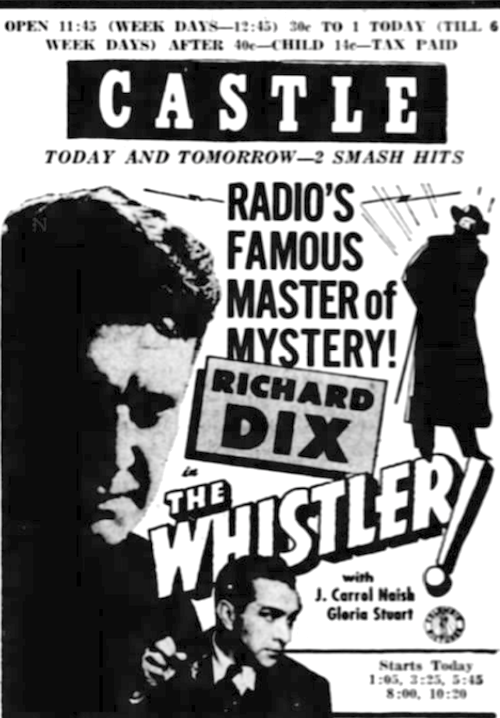 William Castle is one of my favorite filmmakers. Has been since I was a kid. From the budget noir of The Whistler series to cheap Westerns like Masterson Of Kansas (1954) to those gimmick-y horror pictures such as House On Haunted Hill (1959), with Castle, you can count on being entertained. And every once in a while, he’ll give you a little more.

Castle’s second film as director, The Whistler (1944) is a tight little mini-noir that put him on the B-movie map. It was a hit for Columbia Pictures and spawned an eight-picture series that’s been on collectors’ Want Lists for decades. They’re finally showing up on DVD from Sony’s Choice Collection.

Based on the popular CBS radio program, each Whistler movie is a stand-alone story, with Richard Dix starring in all but the last one. He’s a different character every time — sometimes a good guy, sometimes a bad guy. This time around, he’s Earl Conrad, a successful businessman who decides to commit suicide by taking out a contract on himself. He changes his mind, but the guy who set up the hit’s been offed by the cops — and the killer has a very strong work ethic.

It’s obvious that Castle took this assignment very seriously, putting a lot more on the screen than Columbia’s $75,000 budget should allow, building some real suspense and creating a strong sense of doom. As he described in his autobiography, Step Right Up: I’m Gonna Scare the Pants Off America, “To achieve a mood of desperation, I insisted that Dix give up smoking and go on a diet. This made him nervous and irritable, particularly when I gave him early-morning calls and kept him waiting on the set—sometimes for an entire day before using him in a scene… (Dix) was constantly off-center, restless, fidgety and nervous as a cat. When I finally used him in a scene, I’d make him do it over and over again until he was ready to explode. It achieved the desired effect—that of a man haunted by fear and trying to keep from being murdered.”

Richard Dix is convincing as the businessman, becoming more and more harried as the killer’s deadline draws near. J. Carrol Naish is really effective as the hit man, making the most of a part that consists largely of following Dix around and smoking cigarettes. For the rest of the cast, we’re treated to a great lineup of fairly obscure character actors, such as Byron Foulger as the clerk in a flophouse, William “Billy” Benedict of the Bowery Boys as a deaf mute and Joan Woodbury as the widow of the guy Dix saw about the contract (why didn’t she get credit?).

“I am the Whistler, I know many strange tales.”

With this first Whistler picture, Castle set the rules that the rest of the series followed, no matter who directed: Richard Dix, except for that last film; the Whistler, who comments (and whistles) from the shadows; the heavy presence of Fate; a noir-ish lighting scheme, as much budget as aesthetics; and a running time of right around 60 minutes. This is a terrific B movie, and the series as a whole is outstanding. Castle directed three more entries and they’re as good, if not better, than this one.

To be honest, I’m so excited to have these movies showing up on video, I’m not all that concerned with how they look. But I’m happy to report that The Whistler looks great on DVD. Contrast is near-perfect, which is important for a movie that spends so much time in the dark. The source material is crisp and clean. There are no extras. The third picture, The Power Of The Whistler (1945), directed by Lew Landers, has also been released, with two more entries promised for June.

It’s always baffled me how these gems are so often overlooked. Let’s hope these DVDs will help remedy that. Highly, highly recommended.

William Castle’s second time out as director and the first of the eight-picture series based on radio’s The Whistler program. (Castle would direct four of them.) This is a top-notch little mystery/noir film — and it’s a real treat to have it make its way to DVD from Sony’s Choice Collection. This series has been on my Want List for decades. 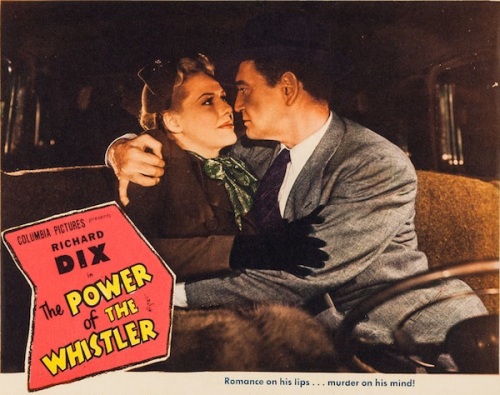 This third Whistler picture has Lew Landers at the helm. Though Richard Dix is in seven of the eight films, he plays a different character each time. Otto Forrest is the narrator. Again, it’s coming from Sony’s Choice Collection.