The Republic Pictures Blogathon: Radar Men From The Moon (1952).

This is an entry in The Republic Pictures Blogathon, a celebration of the studio’s incredible talent roster, wonderful output and lasting legacy. No one signed on for a Republic serial, and I wanted to make sure they were represented.

One of the last Republic serials, Radar Men From The Moon (1952) is a real hoot. It leans heavily on stock footage from previous Republic pictures and recycles the flying suit from King Of The Rocket Men (1949). It introduces a new character — Commando Cody, played by George Wallace — and features Clayton Moore, between stints on The Lone Ranger, as a bad guy.

Clayton Moore: “Even though I had been gone for about three years, things hadn’t changed much at Republic. Directors still had to scrape every bit of footage together for the lowest possible budget. Freddy Brannon padded Radar Men From The Moon with footage from King Of The Rocket Men, Darkest Africa (1936) and The Purple Monster Strikes (1945).”

This serial features one of my all-time favorite movie plot points: aliens enlisting American gangsters to help with their plot to conquer the earth. Moore is one of those gangsters.

Graber (Clayton Moore): “There’s a man in a flying suit chasing us. Step on it.” 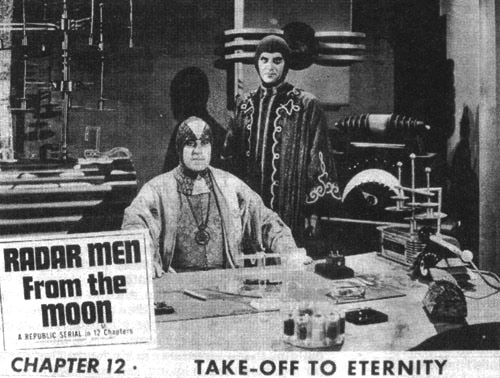 Retik (Roy Barcroft), ruler of the moon, is using an “atomic ray” to destroy strategic locations in the United States. Commando Cody (George Wallace), an inventor-adventurer with a spaceship and a flying suit, heads to the moon to investigate. Soon, he and his cohorts are battling Retik and Krog — and gangsters like Graber (Clayton Moore), both on the moon and around L.A.

There are 12 chapters of this crazy stuff, and it’s goofy, delirious fun. Maybe not so much fun for the cast and crew, however.

George Wallace: “Roy Barcroft had been well known as a Western heavy for so many years, and he was a big, lovable bear, a sweetheart of a guy. And Clayton was just fine, except in one of the fight scenes, he broke my nose accidentally! It was a good group… Up in Red Rock Canyon, it was 112 degrees in the day, and running around in that hot weather with the heavy leather jacket and all this other stuff on, you sweated quite a bit. We had to stay out there all week to shoot. We’d start first thing in the morning, as soon as the sun came up, and work until the sun went down that night… we stayed in some dinky motel right alongside of a freight yard.”

Other locations include Vasquez Rocks, the Iverson Ranch and the train station in Chatsworth (which I assume was close to Iverson).

Republic’s frantic pace of production didn’t even slow down when Moore broke Wallace’s nose. A few minutes after returning from the ER, Wallace was back in front of the camera, a bloody towel waiting just out of the shot.

Dialogue scenes have a first-take quality to them. The actors don’t seem comfortable with the words coming out of their mouths. But they keep it moving from action scene to action scene, and from chapter to chapter — and that, of course, is what a Republic serial is all about.

The Lydeckers’ model spaceship for Radar Men From The Moon.

For me, one of the appeals of any Republic serial is the promise of some first-class model work from Howard and Theodore Lydecker. Here, we’ve seen a lot of their stuff before. But we get some great rocket shots, Cody’s flying scenes and the awesome moon tank.

Radar Men From The Moon wouldn’t be the last of Commando Cody. A second serial, Commando Cody: Sky Marshal Of The Universe, followed. It was originally produced as a TV show, with 12 25-minute episodes — in sequence but with no cliffhangers. Union rules required that it go to theaters first. Again, it features a lot of stock footage. This time, Cody is not played by George Wallace.

To be honest, Radar Men From The Moon can’t hold a candle to some of the great, early Republic serials. But it’s so fast — all 12 chapters run just a bit over two-and-a-half hours — and so much fun, I’ve always found it irresistible. What’s more, it’s readily available on DVD from various sources, though a Blu-ray would be appreciated (as a hi-def Lydecker Bros. demo reel, if nothing else).

Sources: I Was That Masked Man by Clayton Moore; Double Feature Creature Attack by Tom Weaver