1957-58 was an interesting time for the Horror Film. For starters, Hammer kicked off their rethink (I hate the word “reboot”) of the classic monsters with Curse Of Frankenstein and Horror Of Dracula. Jacques Tourneur gave us the masterful Night Of The Demon. And William Castle launched his string of gimmick-y horror pictures with Macabre. But there was something else brewing, with a bunch of unknowns, independents and upstarts cooking up their own scrappy little monster movies. Pictures like Attack Of The Crab Monsters, Earth Vs. The Spider, Curse Of The Faceless Man — and Giant From The Unknown. And while they’re lacking in what we normally think of when it comes to Good Movies, they’ve been beloved by fans since they first played drive-ins and turned up on the late show.

Giant From The Unknown works from a pretty kooky premise. After 500 years in the dirt, a Spanish Conquistador, Vargas the “Diablo Giant” (Buddy Baer), is resurrected by lightning and goes on a killing spree. The sheriff (Bob Steele), a geologist (Edward Kemmer) and a group on citizens from Pine Ridge, California, eventually take him down.

Shot around Big Bear Lake for about $55,000 — and going from idea to answer print in just 60 days, Giant From The Unknown is a hoot. Director Richard E. Cunha and producer Arthur A. Jacobs were making commercials before this first feature. Cunha would make three more low-budget monster pictures in the late 50s: She Demons, Missile To The Moon and Frankenstein’s Daughter. On this one, he was a cinematographer and editor, too.

The Giant’s makeup was done by none other than Jack Pierce, the genius behind all the Universal Monsters. And it boasts a couple of terrific character actors, Bob Steele and Morris Ankrum. Buddy Baer is, of course, the father of Jethro Bodine himself, Max Baer. 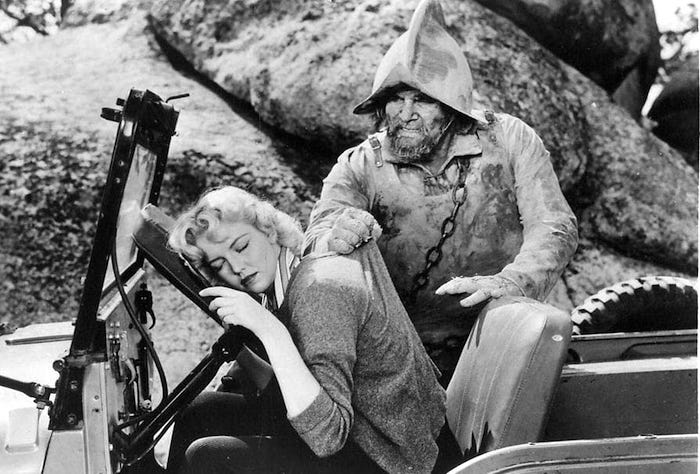 The Film Detective brings Giant From The Unknown to Blu-Ray in a “Deluxe Edition” using a 4K scan of the camera negative. It’s absolutely startling, especially of you remember how it looked on TV or VHS. It looks like it was made yesterday, unbelievably sharp and clean. It comes with a terrific stable of extras — a couple commentaries, interviews, the trailer and a nice booklet.

I’ve loved this movie for decades, and I love what The Film Detective has done with it. It’s wonderful to have movies like Giant From The Unknown get this kind of treatment. Highly, highly recommended.

The Abbott & Costello movies offer up some of the great joys to be had in this world. Their “Who’s On First?” routine (found in The Naughty Nineties) is timeless — and runs constantly in the Baseball Hall Of Fame. Me, I simply cannot be down if Abbott & Costello Meet Frankenstein (1948) is on.

Shout Factory has announced The Complete Universal Pictures Collection, that puts their 28 Universal pictures (they say they saved the studio from bankruptcy) on 15 Blu-ray Discs, packed with hours of extras and a collectible book. It’s coming in November. What a great big box of Wonderful this will be!

Saw the other day that Frankenstein is 200 years old, with Marry Shelley’s novel Frankenstein, Or The Modern Prometheus first published in 1818.

So here’s to Dr. Frankenstein, his monster, the monster’s bride, and anybody who ever helped bring the many Frankenstein movies to the screen — particularly the Universal and Hammer films. 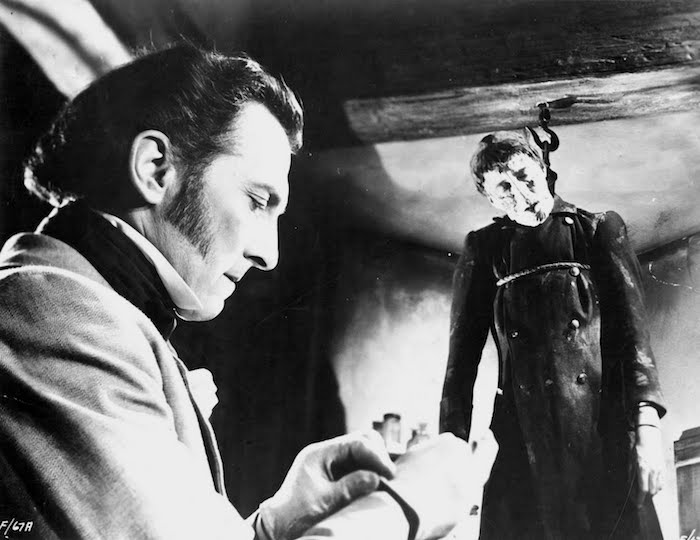 Peter Cushing sits while his monster (Christopher Lee) hangs around.

It was a very shrewd move for Hammer to focus their series on the doctor and his misadventures rather than inviting strict comparisons to the Universal classics, which would be very hard to top. And, of course, casting Peter Cushing in the role was simply inspired.

If in its glory days, Universal made a movie about Frankenstein, Dracula, The Mummy, The Wolf Man, The Invisible Man or The Creature From The Black Lagoon, it’s in this box — in high definition. What more do I have to tell you? 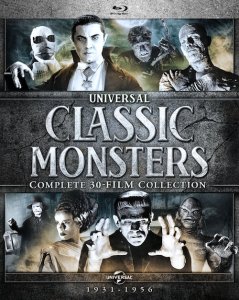 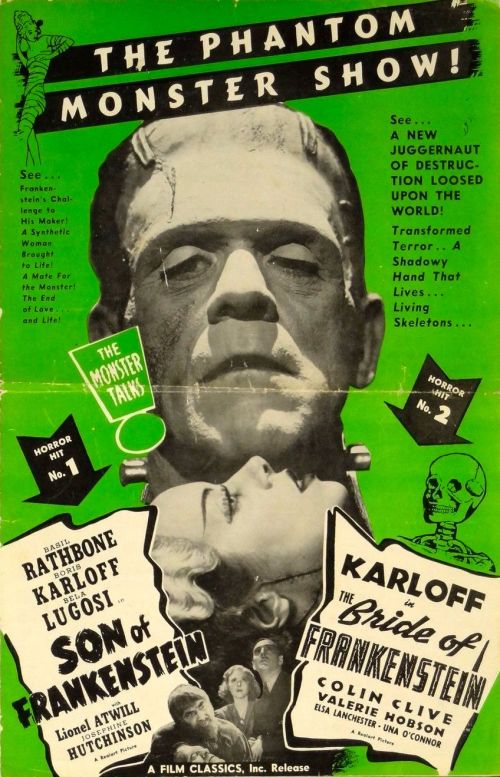 Thirty movies in all, and only one in color (Phantom Of The Opera). The Creature movies and Abbott & Costello Meet The Mummy are 1.85.

This is a great thing, and it’s coming next week.

Universal’s next Complete Legacy Collection — each Blu-Ray set covers everything featuring a particular Universal monster — concerns The Mummy. Providing Universal can come up with the proper number of tana leaves, this edition will be available in May. It spreads six movies over four discs.

The Mummy (1932) is one of the most visually-splendid movies I can think of. Karl Freund packs one incredible shot after another in this thing — and Karloff is at his brilliant best.

The first sequel (or maybe it’s more of a remake), The Mummy’s Hand (1940), has Tom Tyler doing a great job filling in for Boris Karloff — and Wallace Ford is a welcome addition to anything.

The next three Mummy movies — The Mummy’s Tomb (1942), The Mummy’s Ghost (1944), and The Mummy’s Curse (1944) — with Lon Chaney, Jr. as a rather portly mummy making his way through Massachusetts and Louisiana, are a real hoot in that 1940s Universal Monsters kinda way. I love these things. 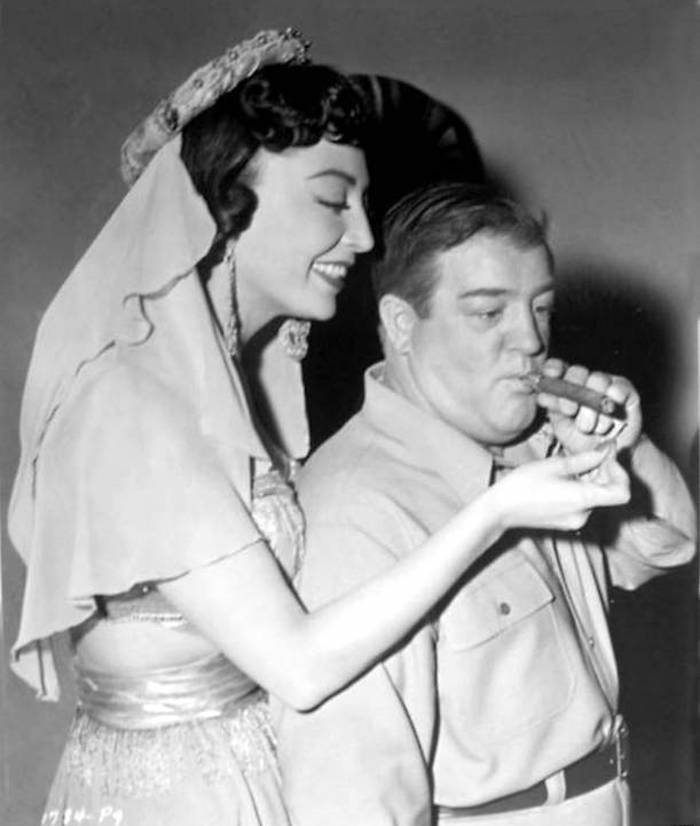 Then there’s Abbott & Costello Meet The Mummy (1955), which throws in Marie Windsor, my all-time favorite actress, for good measure. It was A&C’s last picture for Universal, a studio they pretty much saved in the 40s. Eddie Parker, Chaney’s double on the three previous Mummy movies, plays Klaris throughout this one.

All six Mummy movies are black and white, with Meet The Mummy in 1.85 widescreen — and they’re all sure to look marvelous on Blu-Ray.