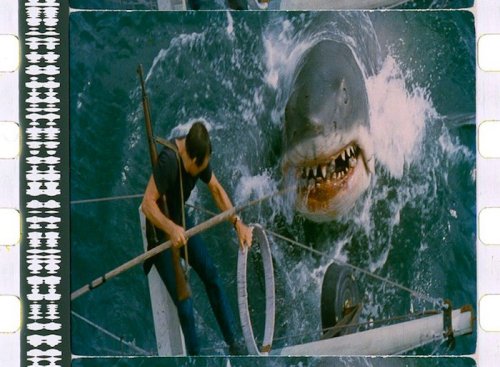 I love the fact that Jaws (1975) turns up in theaters every summer. It’s here in the Raleigh area next week and I can’t wait. Watch for one in your area. 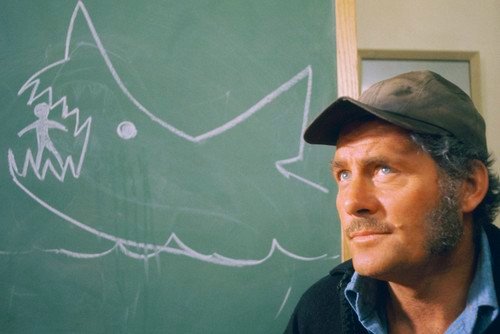 It’s usually not on film anymore, but the digital restoration from a few years ago was terrific. And, of course, on the big screen you can see “the head, the tail, the whole damn thing.”

Coming Back: Close Encounters Of The Third Kind (1977). 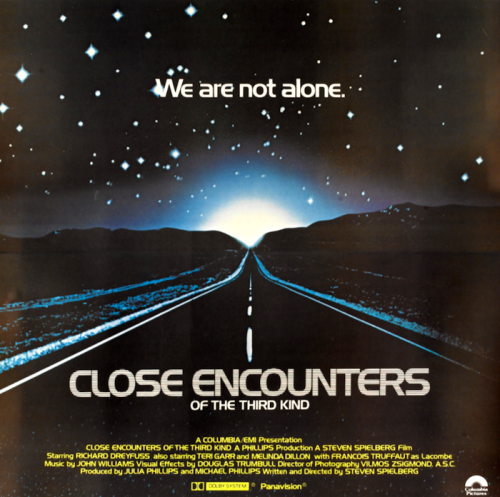 Steven Spielberg’s Close Encounters Of The Third Kind (1977) is 40 years old, which for some of us serves as a reminder of just how old we are. Yikes.

In a sci-fi movie year that had already given us Star Wars, Spielberg’s followup to Jaws (1975) was a big, big deal. We all went a little UFO-happy, just like we’d gotten collectively spooked by the ocean a couple years before.

For those of us who want to relive those days (to “make contact again,” as the trailer says) or give our kids a little taste of ’em, Close Encounters (Spielberg’s Director’s Cut) will play theaters for a week in September, with a new 4K and Blu-Ray release coming a couple weeks later. I’m getting stoked. 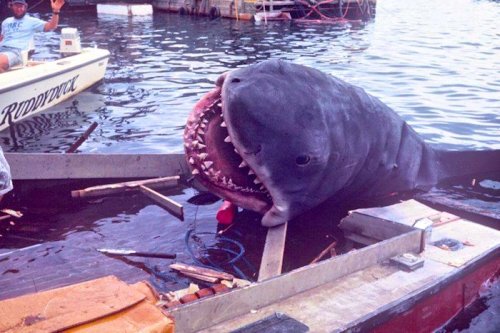 I love the fact that Jaws (1975) turns up in theaters every summer. This year, it’s making the rounds as part of the Flashback Cinema series — timed perfectly for the 4th Of July. 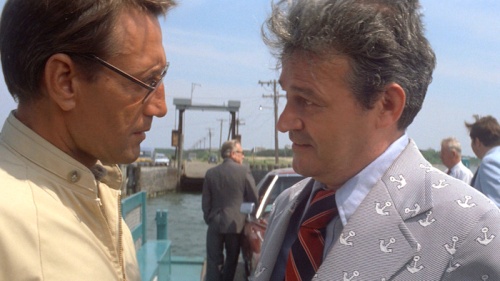 Mayor Vaughn (Murray Hamilton): “Martin, it’s all psychological. You yell ‘Barracuda,’ everybody says, ‘huh, what?’ You yell ‘Shark,’ we’ve got a panic on our hands on the Fourth of July.”

Check the Flashback Cinema listings to see if it’s playing near you: http://www.flashbackcinema.net/schedule/ 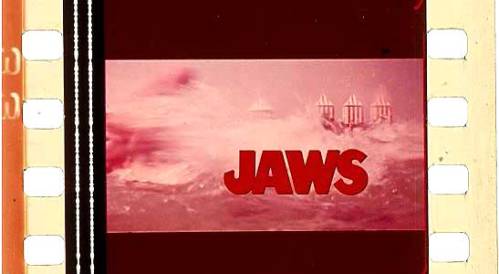 I love the fact that Jaws (1975) continues to make its way to theaters in the summer. Here’s one I wish I could make it to.

The show starts around dusk. They’ve got the full digital rig in place, so it should look and sound terrific.

The image up top is a faded frame from an original 35mm trailer. It in no way reflects on what you’ll see at the Starlite, which I’ve heard many good things about. Wish it wasn’t three-and-a-half hours away! 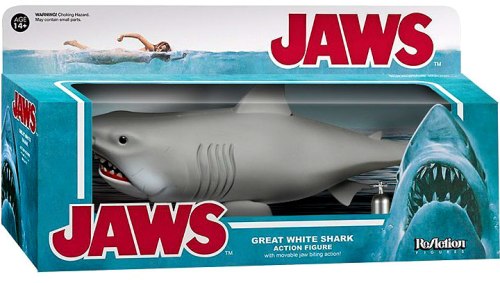 And here’s my Father’s Day present from my daughter. I love it. But why did it take forty-something years for somebody to get around to making this thing? 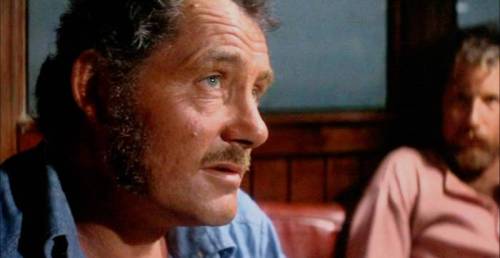 Been meaning to post this since I started this blog. It’s Robert Shaw’s incredible scene in Jaws (1975) where he tells the story of the USS Indianapolis. Written by John Milius and reworked by Shaw himself, it’s an incredible thing, as good as acting ever gets — creepy and touching at the same time.

Quint (Robert Shaw): “Japanese submarine slammed two torpedoes into her side, Chief. We was comin’ back from the island of Tinian to Leyte. We’d just delivered the bomb. The Hiroshima bomb. Eleven hundred men went into the water. Vessel went down in 12 minutes.

Didn’t see the first shark for about a half-hour. Tiger. 13-footer. You know how you know that in the water, Chief? You can tell by lookin’ from the dorsal to the tail. What we didn’t know, was that our bomb mission was so secret, no distress signal had been sent. They didn’t even list us overdue for a week. Very first light, Chief, sharks come cruisin’ by, so we formed ourselves into tight groups. It was sorta like you see in the calendars, you know the infantry squares in the old calendars like the Battle of Waterloo and the idea was the shark come to the nearest man, that man he starts poundin’ and hollerin’ and sometimes that shark he go away… but sometimes he wouldn’t go away.

Sometimes that shark looks right at ya. Right into your eyes. And the thing about a shark is he’s got lifeless eyes. Black eyes. Like a doll’s eyes. When he comes at ya, he doesn’t even seem to be livin’… ’til he bites ya, and those black eyes roll over white and then… ah then you hear that terrible high-pitched screamin’. The ocean turns red, and despite all your poundin’ and your hollerin’ those sharks come in and… they rip you to pieces.

You know by the end of that first dawn, lost a hundred men. I don’t know how many sharks there were, maybe a thousand. I do know how many men, they averaged six an hour. Thursday mornin’, Chief, I bumped into a friend of mine, Herbie Robinson from Cleveland. Baseball player. Boson’s mate. I thought he was asleep. I reached over to wake him up. He bobbed up, down in the water, he was like a kinda top. Upended. Well, he’d been bitten in half below the waist.

At noon on the fifth day, a Lockheed Ventura swung in low and he spotted us, a young pilot, lot younger than Mr. Hooper here, anyway he spotted us and a few hours later a big ol’ fat PBY come down and started to pick us up. You know that was the time I was most frightened. Waitin’ for my turn. I’ll never put on a lifejacket again. So, eleven hundred men went into the water. 316 men come out, the sharks took the rest, June the 29th, 1945.

Anyway, we delivered the bomb.” 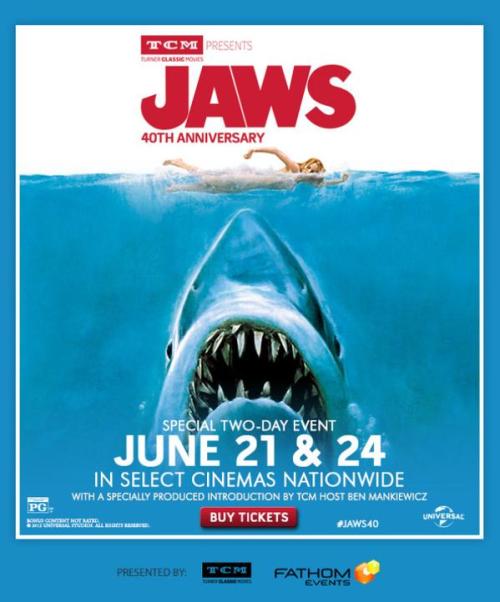 Forty years ago this summer, with Jaws (1975) breaking box office records everywhere, nobody wanted to go in the water. In what’s being called a “40th Anniversary Event,” Jaws is returning to theaters nationwide for two days in June — the 21st and the 24th. It’s a shame it won’t be 35mm, but the 4K restoration of a few years ago is stunning — hope they stick with the original mono mix. You can track down a showing near you here.

I’ve seen Jaws in a theater more times than any other film, and I’m always happy to add to the list. Over the years, I’ve found that it goes well with Raisinets and a Coke. 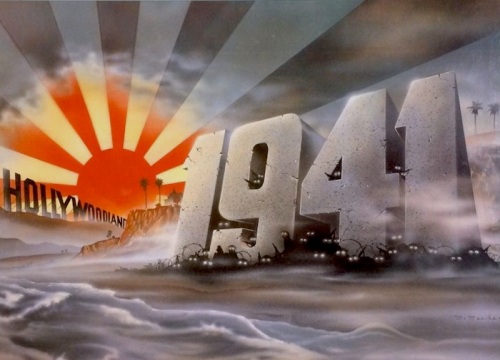 Is there a movie you like more because everyone else seems to hate it? For me, that’s Steven Spielberg’s 1941 (1979), a movie I dearly love and will lift up till the day I die. But saying that, I also understand, and even agree with, many of the complaints about it. Sure it’s big, it’s loud, it’s stupid, it’s disrespectful — and those are all completely positive things in my book.

It’s also coming to Blu-ray in May as a stand-alone disc (it was already part of a snazzy Spielberg set) — with both the two-hour theatrical cut and the longer, expanded thing. I’ve always preferred the theatrical version — I feel it has a better rhythm to it, even though it offers less Slim Pickens, Dick Miller, etc. Speaking of those guys, how could a movie that boasts Warren Oates, Slim Pickens, Elisha Cook, Jr., Dub Taylor, Dick Miller, Murray Hamilton, Christopher Lee and Toshiro Mifune not be a treasure?

1941 is also the movie that made me really realize there was some guy named John Milius that I needed to learn more about. 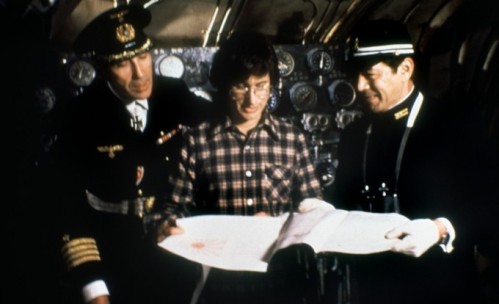 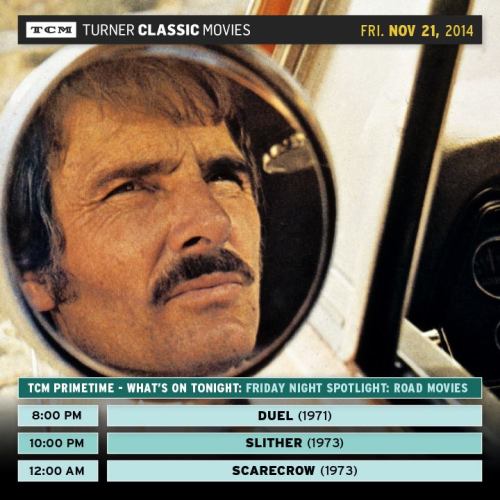 Howard Zieff’s Slither (1973, below) remains one of my favorites films. Richard B. Shull has a great couple scenes before the credits. 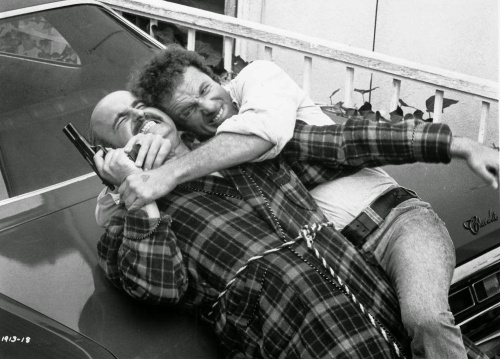