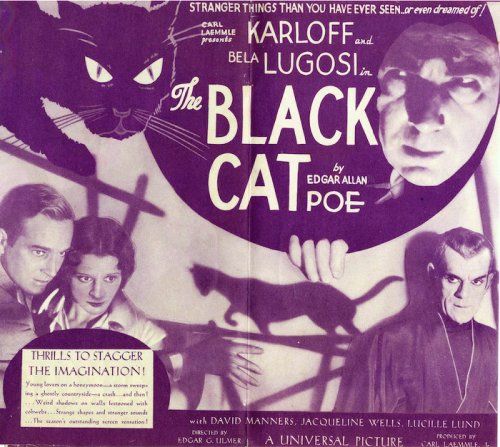 When it comes to the creepy weirdness of 30s Horror, it’s hard to beat Edgar G. Ulmer’s The Black Cat (1934). It makes almost no sense, piling depravity upon depravity (Karloff marries his step-daughter and has a basement full of dead women in glass cases; Lugosi skins Karloff alive) into some sort of Impressionist fever dream of a haunted house movie that’s absolutely original in every way. The posters screamed “STRANGER THINGS THAN YOU HAVE EVER SEEN… or even dreamed of!” — and, for once, they’re weren’t kidding.

It opens like about 157 movies you’ve already seen, however. A group of travelers wind up in a creepy house in the middle of nowhere after their bus crashes during a storm. Anything but original, right? But from then on, things get plenty weird, fast. 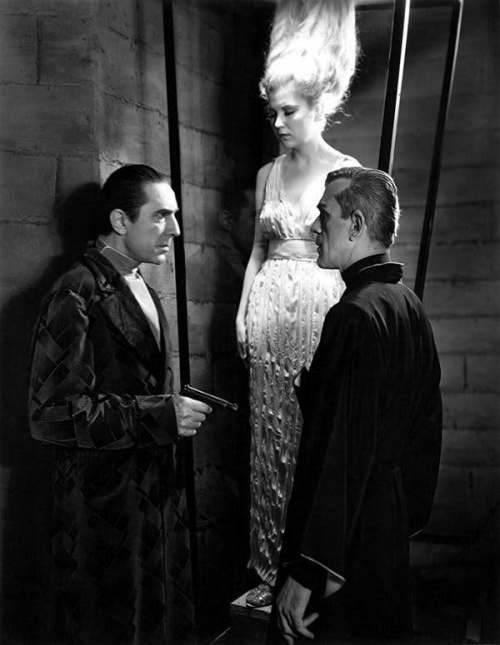 Lugosi is there to settle a score with Karloff, who was responsible for the deaths of thousands of men during the war — and made off with Lugosi’s wife and daughter while he was a prisoner of war. If that isn’t enough, Karloff chose to build his Art Deco home on top of the ruins of the fort he commanded — the scene of all those deaths.

Before its crazed 65 minutes are over, ailurophobia (the fear of cats), a satanic sacrifice, drugs, the basement full of dead women in glass cases and Karloff being skinned are added to the mix. Something for everyone! 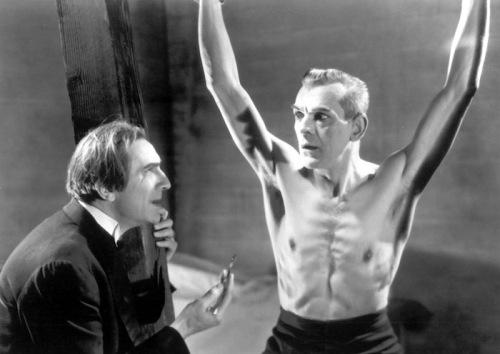 Edgar G. Ulmer was a master at making something out of nothing, and today he’s known for his quickie noir masterpiece Detour (1945). But here, Universal gave him two of their biggest stars, Frankenstein and Dracula themselves, and he created Universal’s biggest hit of the year. He also worked on the screenplay and designed the sets.) After a scandal (an affair with a producer’s wife), Ulmer was blackballed by the major studios, and he spent the rest of his career working largely on Poverty Row. 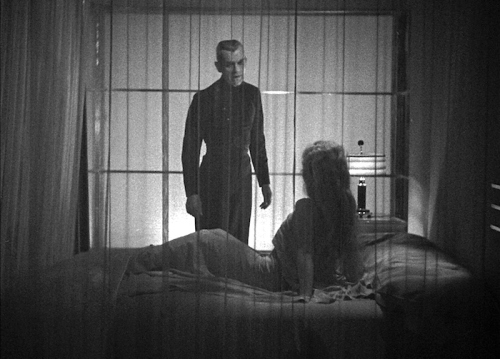 Only once did a movie creep me out so bad that I checked out. That was Tod Browning’s Freaks (1932), which I have no intention of revisiting. But as a kid, The Black Cat really got to me, and I bring that creeped-out memory to it every time I see it. It’s a very weird movie, dealing with some very heavy stuff — a sense of doom and evil is burned into every frame.

The Black Cat is the first of four Karloff-Lugosi films in the Scream Factory’s Universal Horror Classics Vol. 1. The Others are The Raven (1935), The Invisible Ray (1936) and Black Friday (1940). Are all given the real Cadillac treatment and all look wonderful — with a healthy batch of extras. With Gary Don Rhodes, Gregory William Mank and Tom Weaver involved in commentaries and documentaries, you know you’re in good hands.

I first saw The Black Cat on the late show. The station ran a pretty battered 16mm print with murky contrast, a few scratches and some changeover cues where previous stations had marked where they wanted their commercials to go. To see it on high-definition is a revelation. I rarely freeze movies as I watch them, but I stopped this one several time to study Ulmer’s sets and just take in the striking quality of the transfer.

This thing is an absolute must. 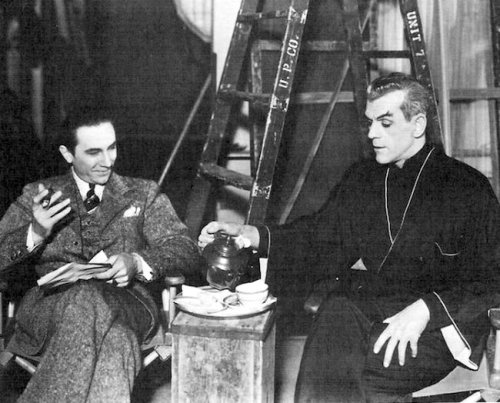 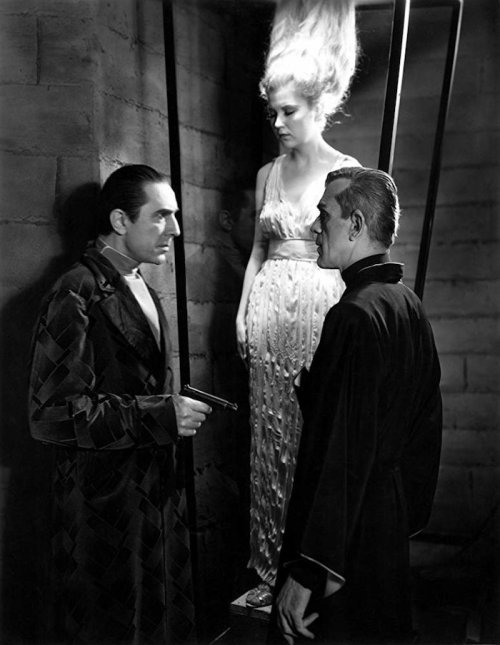 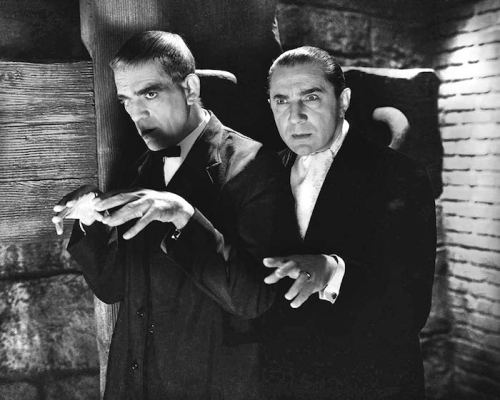 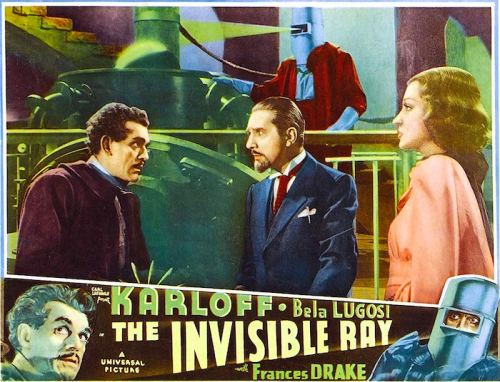 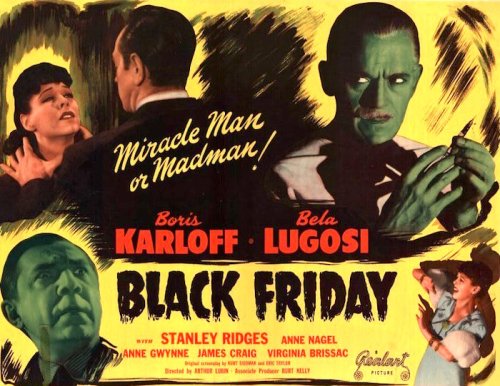 The Joel McCrea Blogathon: The Most Dangerous Game (1932) By Guest Blogger Jerry Entract. 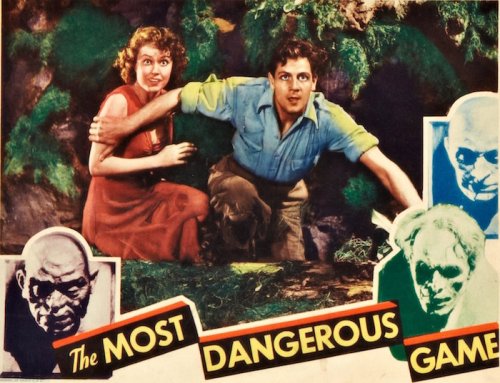 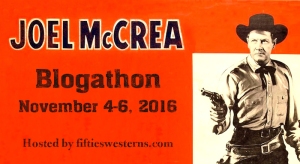 I am delighted to be able to take part in the Joel McCrea Blogathon and would like to thank our host, Toby, for making it possible.

In 1932 Joel McCrea was a coming star. He had done well in The Lost Squadron and had a considerable success with Bird Of Paradise earlier in the year. Tall and very handsome with a pleasing personality.

Merian C. Cooper had already secured RKO’s agreement to shoot King Kong (1933) and wanted to make a film of Richard Connell’s short novel The Most Dangerous Game. The two films were shot concurrently and shared many of the sets, thus saving budget. Fay Wray and Robert Armstrong starred in both — and Max Steiner scored both. 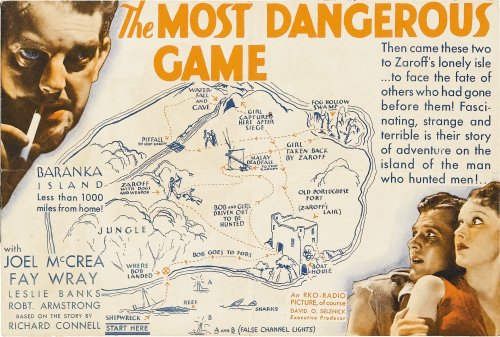 The story is a great idea of the hunter becoming the hunted. McCrea is shipwrecked and ends up the only survivor on a remote jungle island. He becomes a guest of an exiled Russian aristocrat Count Zaroff and it becomes fairly obvious early on that Zaroff is mad. He sees a wonderful chance at the ultimate ‘game’ – to set a man loose only to be hunted down and torn apart by Zaroff’s pack of hounds. It becomes a game of nerves as McCrea tries to keep ahead of the hounds and their masters, accompanied by Wray, whose dress gets more tattered and revealing as they go (getting in training for King Kong!!). 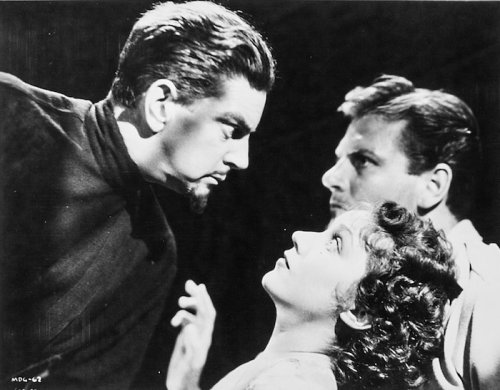 I have not yet mentioned the English actor Leslie Banks who played Zaroff. Because it was apparent Zaroff was mad, Banks played it up quite a bit. I have seen him many times in other films, and his playing was generally subtle and underplayed. He certainly added to the tension with his portrayal though. McCrea was just fine in the central role, as one would expect. There were many more fine films ahead for him – Primrose Path (1940), Foreign Correspondent (1940), These Three (1936), Sullivan’s Travels (1941), to name only a few – before he decided to dedicate his career to the Western in 1946. 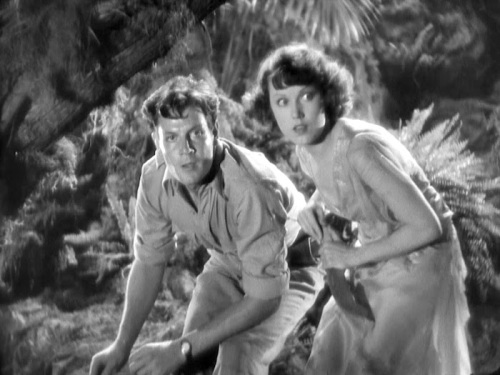 Producer Schoedsack directed the jungle scenes whilst Pichel directed the interiors. RKO remade the story in 1946 (A Game Of Death) and again in 1956 (Run For The Sun).

The 1932 original is an enjoyable and gripping little film that still entertains 84 years on! The film has been available on DVD in several releases. Quality unknown to me.

Please feel free to view my other contribution to this Blogathon over at Toby’s other blog 50 Westerns From The 50s.

Jerry Entract does not run his own blog or have any involvement in the film industry but is an English lifelong movie fan and amateur student of classic cinema (American and British). Main passions are the Western and detective/mystery/film noir. Enjoys seeking out lesser-known (even downright obscure) old movies. 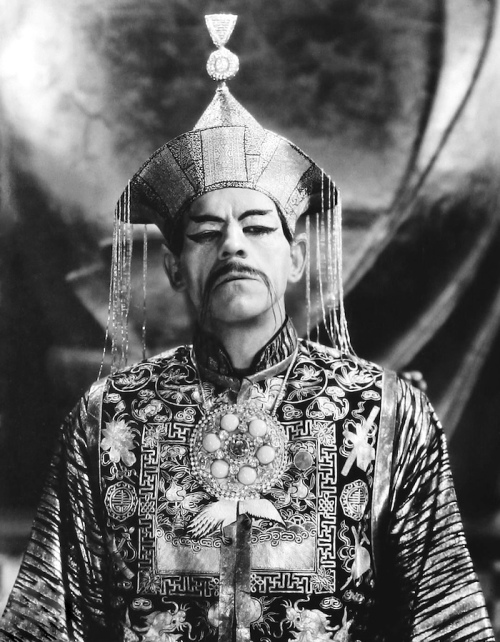 If someone tells you they don’t see what the big deal is about pre-Code movies, show ’em The Mask Of Fu Manchu (1932). If its script has been floating around just a couple years later, it wouldn’t have been made.

The Mask Of Fu Manchu is a fever dream of an adventure story — or maybe a Chinese-food-stomach-ache adventure story, the kind of movie you get when writers and directors are fired, production is halted for a while, rewrites arrive minutes before scenes are shot, etc.

Boris Karloff: “It was a shambles, it really was — it was simply ridiculous.”

This chaos is evident on the screen. Characters come and go. There is little, if anything, in the way of character development. The plot simply doesn’t make sense. There’s no real flow from one scene to the next. And if you’re easily offended, well you’ll be easily offended.

But it’s absolutely fascinating from the MGM lion to the final fadeout. The evil Dr. Fu Manchu has kidnapped a noted archaeologist who claims to have found the tomb of Genghis Khan. Fu Manchu seeks the power contained in the Mongol emperor’s mask and sword. Torture, death and all sorts of mayhem ensue. 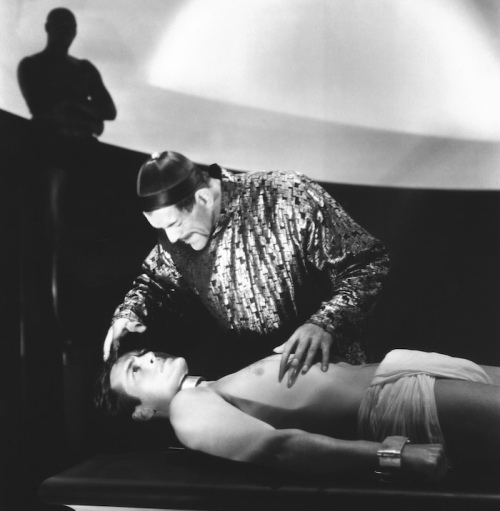 Fu Manchu (Karloff): “This serum, distilled from dragon’s blood, my own blood, the organs of different reptiles, and mixed with the magic brew of the sacred seven herbs, will temporarily change you into the living instrument of my will. You will do as I command!” 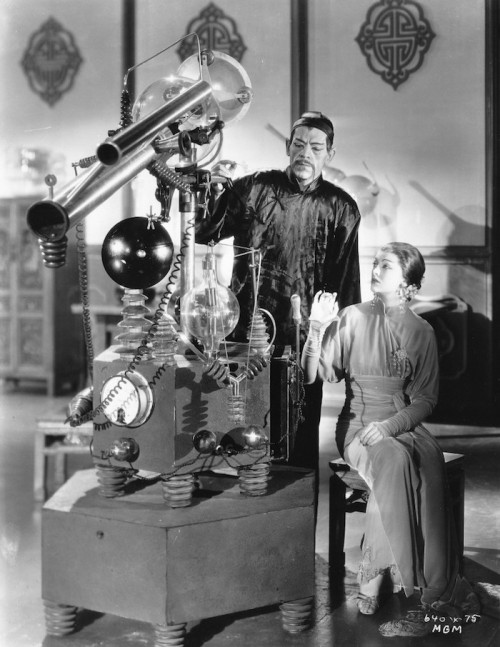 The entire cast is terrific, with Karloff and Myrna Loy (as Fu Manchu’s freaky daughter) giving it their all. Lewis Stone makes a great Nayland Smith, while Sheila Barton and Charles Starrett are fine as the damsel in distress and her rescuer. The set design is incredible, combining over-the-top Chinese influence with 30s art deco and a bit of Frankenstein’s lab (Kenneth Strickfaden, who made the equipment for Frankenstein, decked out Fu Manchu’s laboratory). It’s as lavish as it is crazy.

The Mask Of Fu Manchu is one of six Pre-Code horror pictures in Warner Archive’s Hollywood Legends Of Horror Collection. It’s a MOD re-issue of the 2006 collection, and it’s great to have it available again. The Mask Of Fu Manchu is my favorite of the bunch, and it looks great — and it’s completely uncut (it was softened a bit a few decades ago). The other films — Doctor X (1932), The Return of Doctor X (1939), Mark Of The Vampire (1935), Mad Love (AKA The Hands Of Orlac, 1935) and The Devil-Doll (1936) — look just as good. All the commentaries and trailers from the original release have been retained. For monsters nuts or fans of Pre-Code Hollywood, this is essential stuff — and a steal at $29.95. 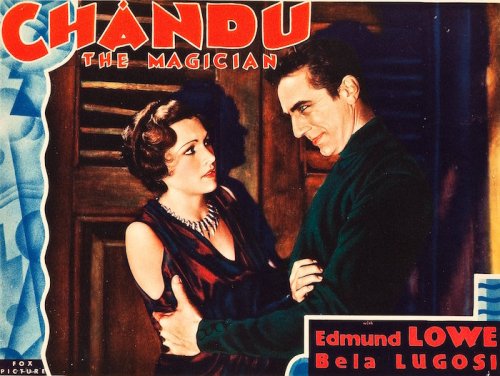 After the previous post on the six-picture set of Pre-Code horror, I should mention a release I somehow let get past me. Kino Lorber has just released the 1932 Bela Lugosi picture Chandu The Magician on Blu-ray. It was directed by William Cameron Menzies and shot by the great James Wong Howe — and it’s often visually stunning.

The story around this one’s a bit complicated. Chandu The Magician movie was based on the popular radio show, with Edmond Lowe as Chandu and Lugosi as Roxor. It would be followed by The Return Of Chandu (1934), a 12-chapter serial — this time, Lugosi played Chandu. In 1935, the serial was edited down to feature length and released as Chandu On The Magic Island. Got that? 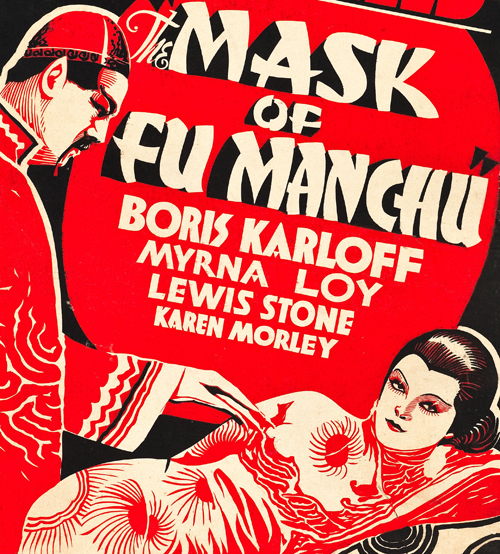 If you like Weird, then you need to spend some time with the Horror films of the 1930s. And with this six-picture set, Warner Archive gives you a chance to jump right into the deep end. 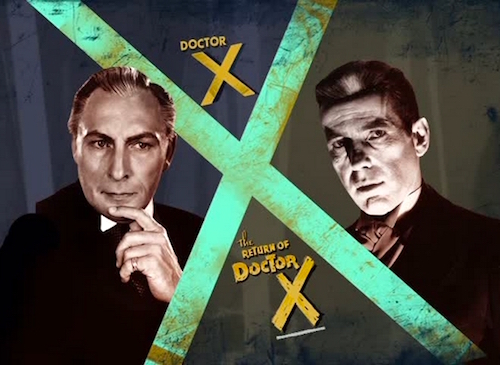 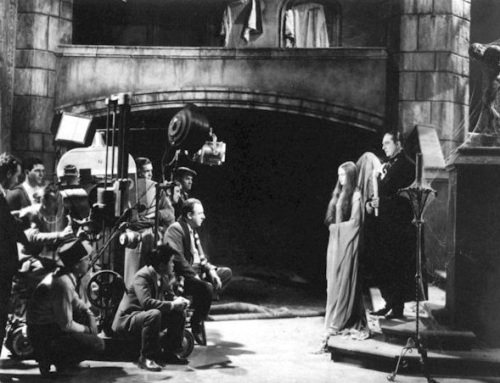 Tod Browning directs a talkie remake of one the great lost Silents, his own London After Midnight (1927) starring Lon Chaney. 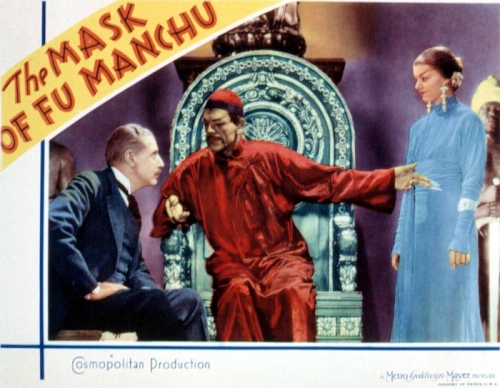 Karloff is the insidious Dr. Fu Manchu, wearing what appear to be his Frankenstein boots. Myrna Loy is his equally-evil daughter. This thing has to be seen to be believed. 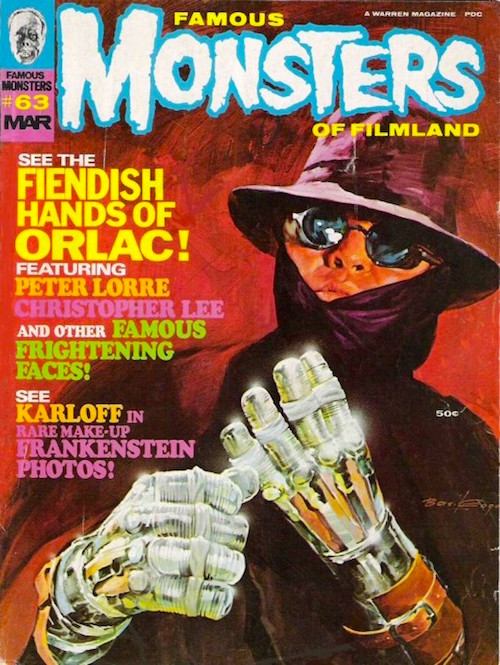 The great cinematographer Karl Freund’s last film as director — he also directed The Mummy (1932). And of course, he was the director of photography for Fritz Lang’s Metropolis (1927) and I Love Lucy (he developed the flat-light system, and perfected the three-camera setup, that are still used in TV today). 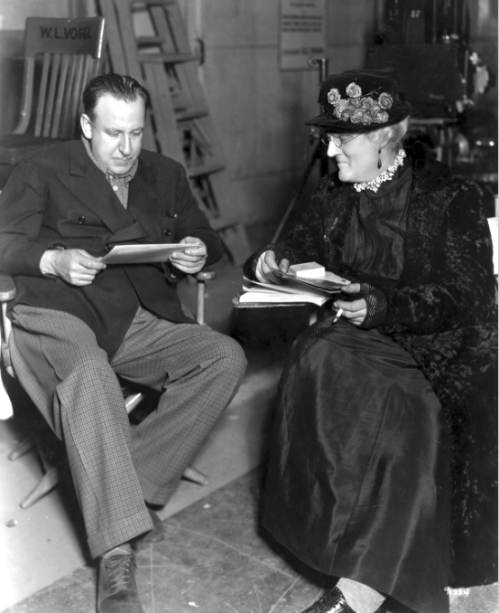 For this creepy crime picture, Tod Browning revisits some of the ideas of his The Unholy Three (1930), Lon Chaney’s only sound film — which they’d already made as a Silent in 1925.