Shaaron Claridge was a police radio dispatcher with the Los Angeles Police Department, and her voice graced Adam-12 on TV. She appeared in one episode.

You can hear her in all but three episodes of Adam-12, along with episodes of Dragnet, Lou Grant and Columbo — and in the movie Blue Thunder (1983).

Saw the first-season Adam-12 episode “Log 172: Boy…The Things You Do For The Job” for the 743rd time the other day. It’s one of my favorites. Ahna Capri plays Penelope Lang, a free-spirit rich girl pulled over by Reed (Kent McCord) and Malloy (Martin Milner).

Miss Lang takes a real shine to Pete, but he’s not amused. She keeps calling the cops for one thing or another, hoping Malloy and Reed will be dispatched to help. She turns up at the station. She even sends him a 1969 Porsche 911S with a Targa top. But Pete’s just not interested, and he does the slow burn throughout the episode. Eventually, in order to get all this to stop, Malloy gives in and sets up a date with her. The episode ends and we never know how it went.

Ahna Capri was great, one of those actresses you get excited about when they turn up in the credits. On TV, she was on about every cool show of the 60s and 70s — shows like The Wild Wild West, Mannix, The Mod Squad, The Invaders, The Man From U.N.C.L.E. (above), Dan August, The F.B.I., Baretta, Ironside, Cannon, Police Story and Kojak.

Ahna passed away on August 9, 2010. A truck hit her car in North Hollywood. She was on life support, in a coma, for more than a week before she died. What a shame.

She’s lovely, she’s funny and she’s a joy to watch. Keep an eye out for her.

Remember, while you’re sitting at home tonight enjoying eggnog and watching It’s A Wonderful Life (1946), or maybe Donovan’s Reef (1963), with family and friends, your local police are out on the job keeping us safe. God bless ’em.

By all accounts, Mister Roberts (1955) was a troubled production, with a feud between star Fonda and director Ford (and a illness/bender taking taking Ford off the picture). Some say Ford’s attempt to turn the play into a John Ford movie was a hindrance, but as most folks see it, the end result is just wonderful. It was a huge hit back in ’55 and is beloved today.

Warner Archive is bringing Mister Roberts to Blu-Ray, and early CinemaScope films are a real treat in high-definition. And given how splendid recent Warner Archive Blu-Rays have looked, this should be a huge upgrade. The old DVD’s commentary from Jack Lemmon (who won an Oscar for playing Ensign Pulver) is being kept, which is good news.

This one’s coming December 15, and I highly recommend it.

From the first episode of Adam-12, “The Impossible Mission,” which was actually directed by Jack Webb.

Pete Malloy (Martin Milner): “This black and white patrol car has an overhead valve V-8 engine. It develops 325 horsepower at 4800 RPMs. It accelerates from zero to 60 in seven seconds. It has a top speed of 120 miles an hour. It’s equipped with a multi-channeled DFE radio and an electronic siren capable of admitting three variables: wail, yelp and alert. It also serves as an outside radio speaker and public address system. The automobile has two shotgun racks, one attached to the bottom portion of the front seat, one in the vehicle trunk. Attached to the middle of the dash, illuminated by a single bulb is a hot sheet desk. Fastened to which you will always make sure is the latest one off the teletype before you ever roll.”

Felt like we were overdue for some Jack Webb. By the way, the patrol car Malloy’s referring to (and leaning on) is a 1967 Plymouth Belvedere.

I’d better type this quick — before I have a heart attack. Four William Castle classics, including 13 Ghosts (1960), are coming to Blu-ray from Mill Creek Entertainment. If I didn’t have a Blu-ray player, I’d be shopping for one now.

It’s hard to tell from the info available whether we’ll get both the B&W and color versions (to preserve the Illusion-O process) of 13 Ghosts. The DVD, which has been out for years, gave us both — and some reproductions of the Ghost Viewer. 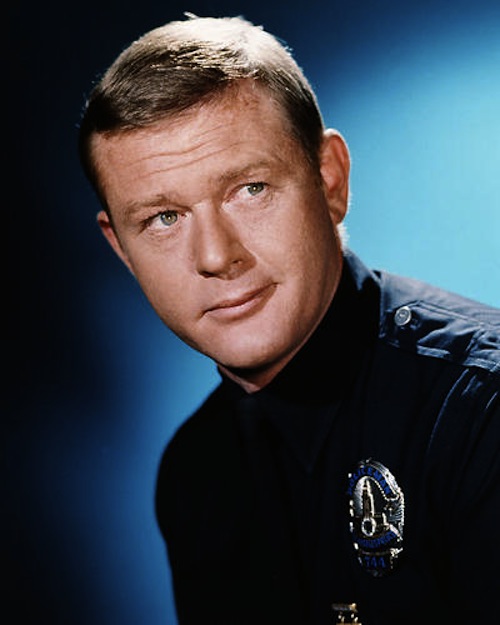 I grew up watching Jack Webb’s Adam-12. It taught me that cops were cool, and that they had a really tough job. It also showed me they were regular people, dealing with the same things all people do, and that you could go to them when you needed help.

Sure, it was just a TV show. But Martin Milner, as Officer Pete Malloy, made it very real to me. He passed away this week, and I hope the LAPD makes a really big deal out of it. He deserves it. And I hope his passing makes people remember Adam-12 — and that cops are cool.

The Jack Webb Blogathon: Behind The Badge.

This post is part of The Jack Webb Blogathon, a celebration of his huge, and hugely influential, body of work. For more Webb on the web, appearing October 17-19, visit Dispatch (or click on the banner below).

As The Jack Webb Blogathon comes to a close, here’s some interesting trivia about Jack Webb and his work.

How did Dragnet get the stories as basis for their episodes?
Through an arrangement with the Los Angeles Police Department, an officer wrote up a three-page report void of names and intimate details. Dragnet writers filled in the blanks and wrote a story around it. They were not given access to actual police files.

Where did the number 714 come from on the famous badge?
Jack Webb thought 7 was a lucky number. The television series began in 1949 and Webb thought badges issued in the 700s was way in the future for police. So, he choose 7 as the first number and just doubled it for the last numbers – 14.

Mark VII Productions, Inc. was Jack Webb’s production company. What is the meaning behind the logo that can be seen at the end of Dragnet episodes (iron door with a hand pounding the Roman numerals with a hammer)?
Jack Webb “stole” the idea from Arm & Hammer baking soda. He said he liked the look of it as a kid. The door to him also meant strength. The VII for 7 was probably, again, use of his lucky number. 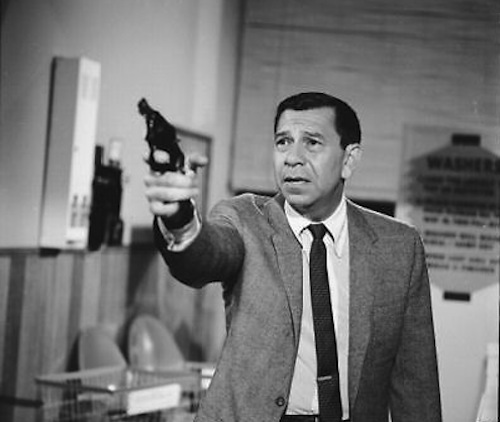 Jack Webb used a real badge and revolver during the first run of Dragnet. What happened to those items after the show ended and what did he use for a badge and revolver in the new Dragnet show?
When the show ended in 1958, he returned the official, registered items to the LA Police Department, which had issued them to Webb for the show. He got them back from the Police Department for the new Dragnet show.

What Emergency! regular doubled for Jack Webb’s Joe Friday character in long shots on the original Dragnet?
Marco Lopez. He also had small parts on Dragnet, as well. He admitted that he liked to cook while on that show and the cast and crew got to partake in his hobby to their delight. This led to the fully-equipped kitchen at the firehouse on Emergency! — he could not only be a regular on the show, but keep on cookin’.

Which actor did Jack Webb want as Sgt. Joe Friday in the original series, but reluctantly took the role himself, when it didn’t pan out?
Lloyd Nolan, best known for his acting roles portraying private detectives Michael Shayne and Martin Kane.

In 1953, a famous movie producer friend and his wife sold their house to Jack Webb, so they could be closer to a park for their son. Who was this producer and what special thing did they do to the house to sell it to him?
Stanley Kramer. He and his wife replaced the doorbell with one that played “dum-da-dum-dum.”

What was the “Jack Webb Special?”
A deluxe, chartered airplane provided by Warner Brothers for Webb’s cross-country tour promoting Pete Kelly’s Blues (1955). It had an eight-person crew, dining room, bedroom and even a conference room.

Speaking of Pete Kelly’s Blues, Herm Saunders played the pianist. What was his relationship to Jack Webb in real life?
At the time, he was Webb’s press agent.

How did Ozzie Nelson (of Ozzie And Harriet fame) come to direct a segment in an episode of Adam-12?
Nelson phoned Webb and requested the assignment. He said he wanted to work with his old family friend Kent McCord again. (As you may remember, McCord was a regular on The Adventures of Ozzie and Harriet.) Nelson did such an impressive job, he was asked to direct the episode called “The D.A.”

Jack Webb turned down the chance to make a movie, which lead to great animosity between the guy who wrote the story for the movie and Kent McCord. Who was the author, what was the movie and why all the hostility?
Joseph Wambaugh wrote The New Centurions, among other books about police like The Onion Field and The Blue Knight. He also created and advised on the television show Police Story. After Webb declined to do The New Centurions, according to McCord, Wambaugh set out to tarnish the badges of Jack Webb and his Adam-12. In interviews, Wambaugh would misquote McCord, trash the show’s acting and call into question the realism of the characters they portray. McCord was hot under the collar about Wambaugh’s mouthing off and was quoted as saying: “He spends his days sitting on his rear and reading burglary reports. I think he‘s out of touch with the guys who patrol the streets,” and “He shouldn’t be telling me how to act. I don’t give him advice on how to read burglary reports.” He also didn‘t like how Wambaugh‘s police characters were “jerks“ or “petty criminals,” which of course was an insult itself to Jack Webb’s style. McCord went on to say about Wambaugh, “If he had anything to say he could tell it to my face or I’d punch him in the face,” and “I’m tired of picking up newspapers and magazines and seeing Wambaugh rap me. If he keeps it up I’m going to rap him.”

Hopefully, this blogathon has you wanting to see more Jack Webb, or better yet, own it. (I can’t wait to revisit The D.I.) Here’s where you can get the stuff written about over the weekend. Physical evidence, I guess you could say.

Dragnet (TV, 1951-59)
Public domain episodes are available from various companies. Quality varies from pretty darn good to absolutely wretched. You can also find some on YouTube and Roku.

Dragnet (Feature, 1954)
Available from Universal’s Vault program. If I didn’t consider this movie absolutely essential to life as a human, I’d tell you to wait till it was redone, preferably for Blu-ray.

Dragnet (TV, 1967-70)
You’ll find Dragnet on MeTV and Hulu Plus, along with Adam-12 and Emergency! They’re also on DVD from Shout Factory, complete with some really terrific extras, including the 1966 TV movie.

He Walked By Night (1948)
Several DVD sources for this one. Stay away from Alpha, and you’ll be OK.

Dark City (1950)
This is available on DVD from Olive Films—and in the same Blu-ray noir set as Appointment With Danger.

Appointment With Danger (1951)
Olive Films has brought this to DVD as a stand-alone disc and on Blu-ray as part of a film noir set.

SOURCES: Various newspapers, 1954-1976
Thanks to my wife Jennifer for researching and writing the trivia stuff.