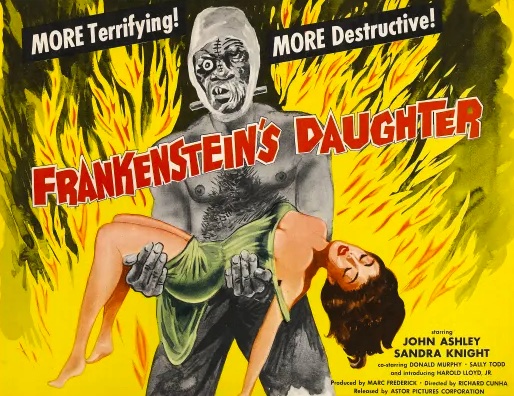 Richard Cunha directed a handful of films, including Frankenstein’s Daughter, that I have a real fondness for, regardless of whether they’re any good or not. Caught this one on the late show as a teenager, when I was soaking up as much of this stuff as I could get my hands on.

At the time, I was enticed by stills in some monster movie books and magazines, and by the fact that John Ashley was in it. I’d seen Ashley in Larry Buchanan’s abysmal The Eye Creatures, a 16mm AIP TV movie from 1967 (and a remake of 1957’s Invasion Of The Saucer Men) — and, of course, the Beach Party pictures. 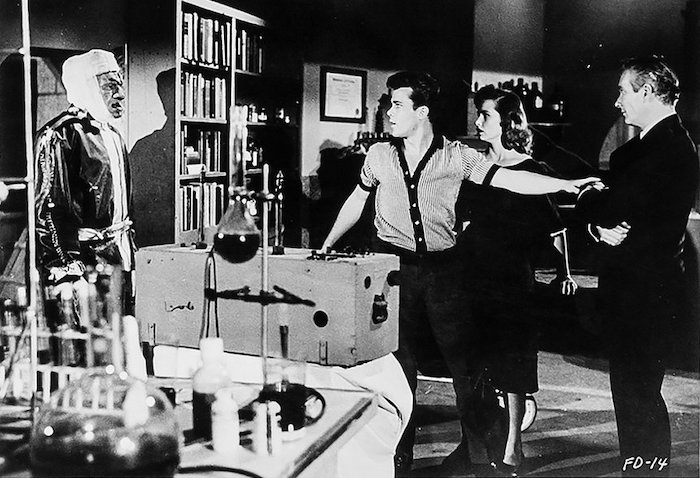 Richard E. Cunha was born in Honolulu in 1922. He attended LA’s Art Center School. After the Japanese bombed Pearl Harbor in December, 1941, Cunha enlisted in the Air Force and served in their First Motion Picture Unit, making training films at the Hal Roach Studios (nicknamed “Fort Roach” at the time).

After the war, Cunha started his own company, making industrial films and commercials — and he shot some early TV shows. He’d later work as DP on Death Valley Days and Branded.

It was in 1957 that Cunha began his run of low-budget monster movies: Giant From The Unknown, She Demons, Missile To The Moon and Frankenstein’s Daughter. Each were done in about a week for around $65,000. They’re a load of cheeseball fun, with personal favorites being Frankenstein’s Daughter and Missile To The Moon (I’m a sucker for those guys-reach-another-world-and-find-a-society-of-women movies). It’s hard to put your finger on what makes Cunha’s movies somehow better than the other one-week wonders from the same period, but they are. 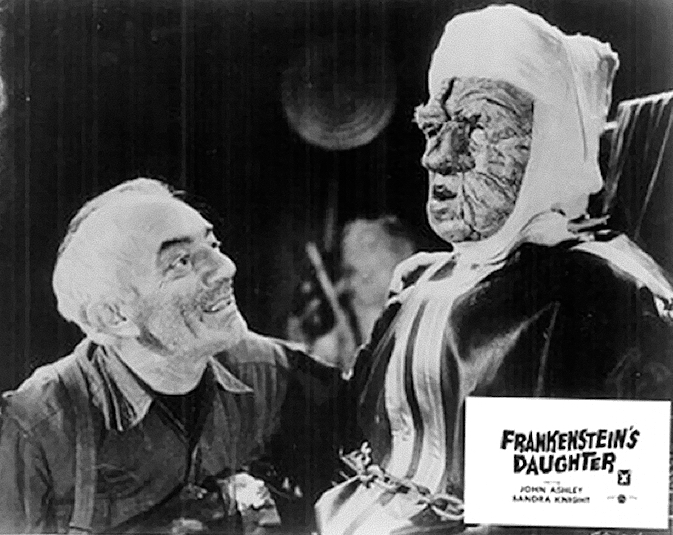 But our focus today is on Frankenstein’s Daughter. It’s got yet another member of the Frankenstein family conducting the family business under an assumed name (the very lame Oliver Frank). Oliver is working as a lab assistant and spiking the fruit juice of his boss’s niece Trudy (Sandra Knight) with a secret formula that contains something called Digenerol. While all this is happening, Trudy has recurring dreams of turning into a monster. And if all that’s not enough, Oliver is also assembling a female version of the typical Frankenstein brand of “perfect being.” All that, and it’s got a Playboy Playmate in it (Sally Todd, February 1957). Sounds awesome, don’t it?

On Blu-Ray, this thing looks terrific — nice and clean and sharp, framed the way it should be (1.85), with surprisingly punchy audio. Never thought I’d see it look like this.

Then there’s all the extras, and The Film Detective really piles ’em on. For starters, there’s a commentary from Tom Weaver (who also wrote some stuff for the packaging). Then there are two terrific documentaries: Richard E. Cunha: Filmmaker Of The Unknown (complete with some interview footage) and John Ashley: Man From The B’s. I loved ’em both. This is an all-around wonderful release, my favorite so far from The Film Detective.

It’s really easy to recommend this thing, especially to fans of such nonsense. Here’s hoping that The Film Detective gets around to She Demons soon (Missile To The Moon got a pretty solid Blu-Ray release from Snappy Video).

Here’s another little-over-a-week wonder making its way to Blu-Ray thanks to our friends at The Film Detective. Frankenstein’s Daughter (1958) was shot in eight day for around $65,000, and it’s a real treat for lovers of such junk (count me as one).

Sandra Knight’s a teenager who dreams she turns into a monster at night. Little does she know she really is — she’s being slipped a serum that turns her into something deadly and hideous. Rest assured, it’s every bit as ridiculous, and wonderful, as it sounds.

The Film Detective is on a roll these days, and I can’t wait to get my hands on Frankenstein’s Daughter. Sorry, that sounds a bit creepy. Let’s just say I’m excited about this release.

This news is like Christmas is coming early this year. Scream Factory is not only promising Roger Corman’s Day The World Ended (1955) on Blu-Ray, but How To Make A Monster (1958), too!

When it’s announced that American International Studios is going to quit making horror movies and focus on musicals and comedies, the makeup man (Robert H. Harris) who created the creatures that made the studio successful vows to get revenge. 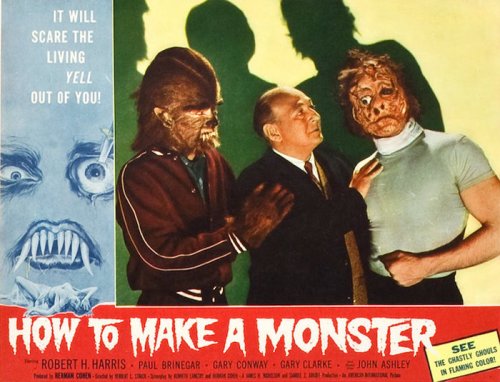 This sets us up for a very contrived (they had no studio) look at the inner workings of AIP. It’s cool to see Paul Blaisdell’s masks and stuff sitting around, and the crossover from I Was A Teenage Frankenstein and I Was A Teenage Werewolf (both 1957) is terrific.

If all that wasn’t wonderful enough, the last reel was shot in color. When I saw How To Make A Monster on TV in the 70s, the color wasn’t color anymore — the print was B&W all the way, and I felt so cheated. I’m sure that won’t be a problem when this arrives on Blu-Ray next year. Scream Factory will certainly have it all in tip-top shape. Highly recommended.

As a kid, I completely agreed that ditching monster movies for musicals should be a capital offense.

The merits, or lack of them, of the Beach Party movies may be the embodiment of “one man’s trash is another man’s treasure.” To me, these things are treasure all the way. I love these stupid movies, so I was overjoyed to learn that Olive Films was bringing How To Stuff A Wild Bikini (1965) to Blu-Ray.

How To Stuff A Wild Bikini is one of the later ones — some consider it the last “official” one, and admittedly things were getting a little tired by this point. But many of the key people and elements are in place — Annette, Eric Von Zipper, Bonehead, Animal, surfing, Rock N Roll, Mary Hughes and so on. Buster Keaton is a welcome addition — he’d been in a couple of the previous ones. Instead of Timothy Carey as South Dakota Slim, we get Len Lesser as North Dakota Pete. Frankie’s on hand, but he’s limited to not much more than a cameo.

It goes something like this. Frankie’s away  Tahiti in the Naval Reserve. While he’s enjoying the company of the local girls, he wonders if maybe Dee Dee (Annette Funicello) is behaving as badly. A witch doctor (Buster Keaton) sends the beautiful Cassandra (Beverly Adams) to the beach to catch the eye of Dwayne Hickman, a young advertising man who’s taken a shine to Annette.

Cassandra creates quite a splash at the beach — all the surfers go nuts for her, an executive (Mickey Rooney) wants to use her to sell stuff, and Eric Von Zipper (Harvey Lembeck) and the Ratz and Mice turn up. It all winds up with a bunch of nonsense on motorcycles, along with a cameo from Elizabeth Montgomery. 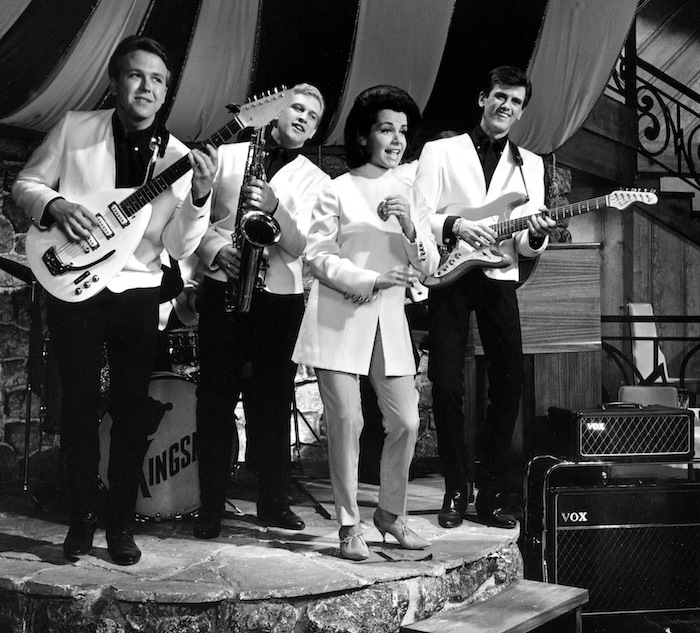 Annette Funicello with The Kingsmen.

Some terrific musicians and bands make their way through these films, from Dick Dale to Stevie Wonder. This time around, we get The Kingsmen, the Portland garage band whose “Louie Louie” is the one you hear constantly. A soundtrack LP for the picture had two songs by The Kingsmen, one being the title tune.

And if all that’s not enough, the titles are by Art Clokey, the clay animation guy behind Gumby.

Olive Films has brought How To Stuff A Wild Bikini to Blu-Ray, and it looks splendid. Having seen these things on TV countless time growing up, it’s a revelation to see them on Blu-Ray. Floyd Crosby’s Panavision photography makes the most of the wide screen and saturates the Pathecolor, and it’s all perfectly presented on this Blu-Ray.

Some might consider this a waste of high-definition technology, but this is the only way to see these movies. It’s gorgeous and highly recommended. Now, where’s Bikini Beach (1964)?

Okay, so maybe the whole Beach Party thing was starting to run out of steam by the time they got around to How To Stuff A Wild Bikini (1965). But who cares? All the elements are in place, from Frankie and Annette to Eric Von Zipper (Harvey Lembeck) and Bonehead (Jody McCrea) to the later addition Buster Keaton (as Bwana in this one).

It’s plenty stupid and tons of Pathécolor, Panavision fun. And I’m so stoked that it’s making its way to Blu-Ray from the folks at Olive Films. They did a tremendous job bringing Muscle Beach Party (1964) and Beach Blanket Bingo (1965) to high definition — let’s hope they get around to Bikini Beach (1964). Coming (in off the curl) in late June.

VCI has announced the upcoming Blu-Ray release (March 12) of Eddie Romero’s Beyond Atlantis (1973). This time around, Romero and producer-star John Ashley aimed a bit higher and added Patrick Wayne to the mix. With a transfer form the original 35mm negative and a commentary, interviews and other extras, this should be a lot of tacky fun.

VCI has announced their upcoming Blu-Ray release (late February) of Eddie Romero’s Beast Of The Yellow Night (1970). They promise a new restoration from the camera negative and an archival print. Made in the Philippines, it was the first film released by Roger Corman’s New World Pictures.

Back in 1965, Young Dillinger (1965) played as a twin-bill with Mario Bava’s Blood And Black Lace (1964). This ad’s for the opening in L.A., but they played everywhere this way — even drive-ins not far from where I’m sitting here in North Carolina. Man, what a “blazing double-blast of thrills and shocks” this must’ve been.

One’s in gorgeous black and white, the other in eye-popping Technicolor. One is a cinematic love letter to the Tommy Gun, while the other favors all sorts of things with blades. Both are lurid, violent masterpieces — the stuff that makes early 60s genre movies so wonderful.

Incidentally, and the reason I came across this, both of these pictures have seen some recent video activity. Young Dillinger was just made available on DVD by our friends at Warner Archive (the movie’s terrific and the disc looks great), and VCI is prepping Blood And Black Lace for a Blu-Ray due in October.

So, with a little coordinated eCommerce, you can recreate June 9, 1965 in the privacy of your own home.

VCI has announced a Blu-Ray release of Twilight People (1972) for January 2018.  Eddie Romero directed this Filipino-American take on H.G. Wells’ The Island Of Dr. Moreau — with a little of Romero’s previous Terror Is A Man (1959) thrown in for good measure.

Star John Ashley was one of the producers. He and Eddie Romero became quite successful with their cheap horror movies, stuff like Brides Of Blood (1968), Beast Of Blood (1970) and The Woman Hunt (1972, yet another version of The Most Dangerous Game). Their films were often done for Roger Corman’s New World Pictures, with budgets of around $125,000. This one was the first film released by Dimension Pictures. It played in double bills with everything from Man Beast (1956) to The Sin Of Adam And Eve (1969) to Conquest Of The Planet Of The Apes (1972).

John Ashley had a fascinating career, going from AIP to TV shows like The Beverly Hillbillies to the wonderfully awful AIP TV movie The Eye Creatures (1965) to these Filipino movies to consulting on Apocalypse Now (1979, shot in the Philippines) to producing The A-Team and Walker, Texas Ranger. Wish he’d written his memoirs before passing away in 1997.

VCI put Twilight People out on VHS back in the day, and their eventual DVD was pretty good. This Blu-Ray release will feature a 2K scan of the original negative, presented in the proper aspect ratio. Extras will include a video interview with Eddie Romero, a still and poster gallery, and a commentary by Toby Roan.