Nobody’s ever going to accuse Johnny Weissmuller of being a good actor, but he made plenty of entertaining movies. He chose to retire after Sam Katzman’s Jungle Jim films, 16 cheaply-made (the norm for Katzman) adventure pictures that make liberal use of stock footage, and the later syndicated TV series. Jungle Moon Men (1955) is the next-to-last Jungle Jim picture, and Weissmuller goes by his real name instead of Jungle Jim. Go figure.

In this one, Weissmuller sings on as a guide for Ellen Marston (Jean Byron), a researcher who wants to explore the Baku country — in search of the Egyptians’ secret to eternal life. 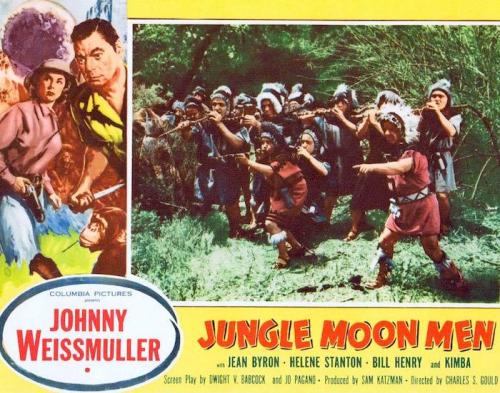 They come across the Moon Men — a pygmy tribe armed with poisonous darts, a necklace bearing Egyptian hieroglyphics and a big fat diamond, and some bad guys (Myron Healey is one of them) out to get that diamond. All this nonsense takes us to a cave where Jim/Johnny and the others meet the Baku High Priestess Oma (Helene Stanton) — who must remain in the cave to avoid the wrath of the sun god Rah. It’s rather weird, to say the least, and it’s all wrapped up in 69 minutes. 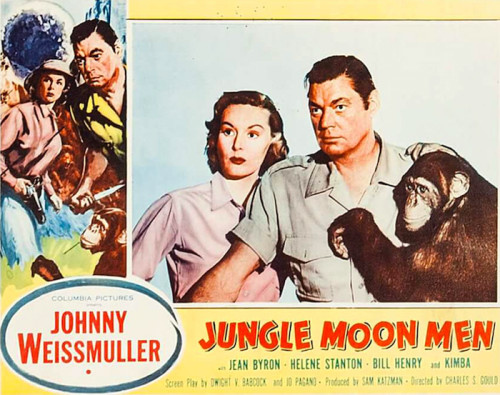 Director Charles S. Gould had a long career as an assistant director — he worked on number of the classic Universal monster movies, among other things. Jungle Moon Men is one of the few features he directed. The later Jungle Jims are a fairly ramshackle bunch, with (even) less money and attention going into making these things. Gould probably did the best he could with what he had to work with.

Jean Byron, the researcher here, is known for playing Patty Duke’s mom on The Patty Duke Show. Helene Stanton was in The Big Combo and New Orleans Uncensored (both 1955), highlights of a very short film career. She’s the mother of Dr. Drew Pinsky, the radio/reality show guy. Myron Healey made a pretty good living playing bad guy parts like this. And Billy Curtis — who’s in everything from Terror Of Tiny Town (1938) to Superman And The Mole-Men (1951) to High Plains Drifter (1973), along with a previous Jungle Jim picture, Pygmy Island (1950) — plays Damu, the leader of the Moon Men.

There’s not a lot to the Jungle Jim movies, and Jungle Moon Men is one of the lesser ones. But there’s something about these things — probably Weissmuller himself — that really appeals to me. Others must agree: calls for a DVD or Blu-Ray set of these is one of the most common wants I get around here.