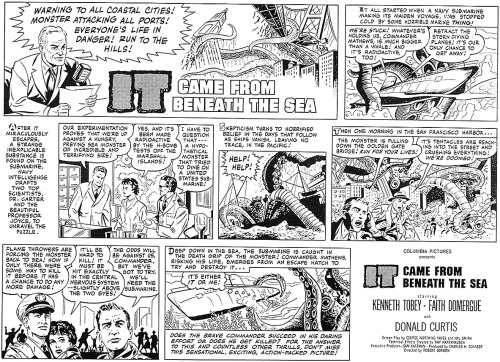 Here’s a cool comic-style ad for It Came From Beneath The Sea (1955). This one has it all: Kenneth Tobey, Faith Domergue, Ray Harryhausen and Sam Katzman. Click on the ad and you can see it much bigger. 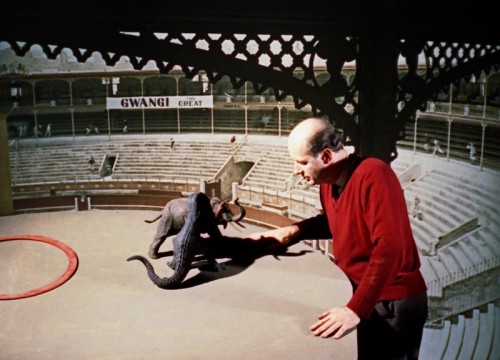 The incredible stop-motion creature effects of Ray Harryhausen seem made for high-definition. So it’s always good news when some of his work is announced for Blu-Ray. The latest is The Valley Of Gwangi (1969) from Warner Archive. 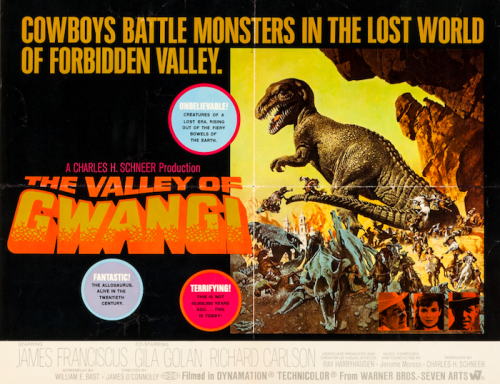 The cowboys vs. dinosaurs storyline, with a good bit of King Kong (1933) worked in, came from Ray Harryhausen’s mentor Willis O’Brien. It had been brought to the screen as The Beast Of Hollow Mountain (1956). The effects in Gwangi are incredible, some of the master’s finest. And while the movie wasn’t a hit back in ’69, Harryhausen’s legion of fans have always dug it. Warner Archive haven’t put a date on it yet, but it’s coming.

When your movie boasts Raquel Welch in a fur bikini and dinosaurs from the great Ray Harryhausen, you don’t really have to worry about things like dialogue. And they didn’t, letting the actors recite fake caveman lingo. “This is the way it was,” claimed posters in the U.S.

Filmed on the Canary Islands, One Million Years B.C. (1966) made Welch an international sex symbol and launched a series of dinosaur/cavemen pictures from Hammer Films. 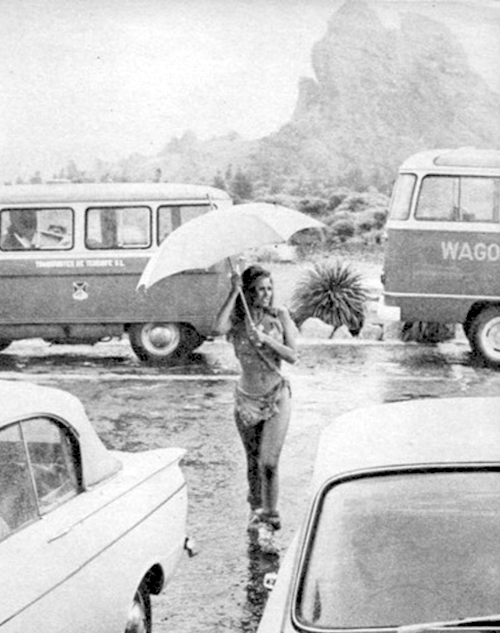 Kino Lorber will bring it to Blu-ray in November. British prints were nine minutes longer than what we saw in the States — and they got real Technicolor instead of crappy-looking DeLuxe. Let’s hope KL gets hold of the UK version.

Mill Creek has come through with a good one: It Came From Beneath The Sea (1955) and 20 Million Miles To Earth (1957) as a Blu-ray double bill. These may be my two favorite Harryhausen films, and I’m glad they’ll be presented without the colorized versions. If nothing else, that omission makes this purchase worthwhile.

It Came From Beneath The Sea stars Kenneth Tobey, who I’d love to see on Blu-ray in Howard Hawks’ The Thing (1951).