Bring on the AIP and Corman! Second Sight out of the UK has announced a Blu-Ray release of Roger Corman’s X – The Man With The X-Ray Eyes (1963). It’s a terrific movie that does wonders with its small budget (you could say that about most Corman movies, I guess).

Ray Milland is researching ways to boost man’s eyesight, who in typical horror movie fashion, tries his serum out on himself — with the usual results.

One of Corman’s best, with outstanding camerawork from the great Floyd Crosby. And Milland is really, really good. Highly recommended.

Here’s a perfect way to celebrate the great Boris Karloff — stay up all night watching a slew of his movies.

This is the kind of blog, read by the kind of people, where A Bucket Of Blood (1959) doesn’t require a lot of set-up. It was written by Charles B. Griffith, directed by Roger Corman for AIP, shot in five days for $50,000 (on sets left over from Diary Of A High School Bride), with the great Dick Miller in the lead. The end result is wonderful.

So, 60 years later, we get A Bucket Of Blood on Blu-Ray from Olive Films, part of their Signature series, and it’s incredible. You probably never thought you’d see this movie look like this. I certainly didn’t.

Sure, it’s still a $50,000 movie about a guy that kills people to make statues. But now we get a chance to really appreciate all that’s going on. We see Corman showing some real confidence as a director, displaying some real chops here and there — and turning out one of the better Horror Comedies, a very-hard-to-pull-off sub-genre. Dick Miller makes Walter Paisley both a lovable chump and a creepy killer. And everyone seems to be in on the fun when it comes to showing us how pretentious, cynical and hypocritical the whole Beatnik scene could be. The dime-store set design is really effective and fun to study in high definition.

Olive Films has given A Bucket Of Blood the attention I think it deserves. We’ve seen it looking so bad for so long — from muddy 16mm dupes to crappy PD VHS tapes and DVDs, it’s a bit of a shock to see it so crisp and clean. I found myself pausing it repeatedly to study things.

Along with the movie looking like a million bucks, a big leap from its $50K origins, we get a bucket-load of terrific extras, most courtesy of Elijah Drenner, whose documentary That Guy Dick Miller is a treasure. Drenner provides a new interview with Corman, an audio commentary and a wonderful visit with Dick Miller and his wife Lanie. This package is a joy from one end to the other, and a great way to revisit an old favorite. Highly, highly recommended. 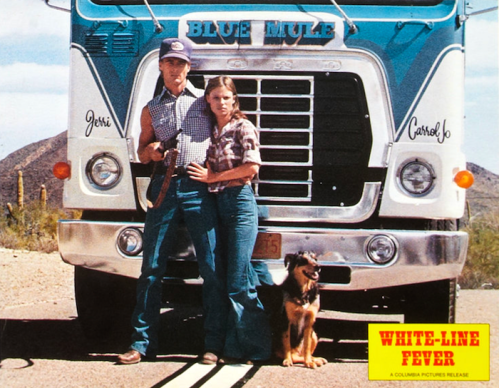 Jonathan Kaplan directed a cool Isaac Hayes movie called Truck Turner (1974) and followed it with a movie that’s really about trucks, White Line Fever (1975). It’s a modern day Western, pretty much, with some good stunt work and a terrific cast. Kaplan did exactly what I would’ve done if I had a shot at making a movie in the mid-70s — load it up with all my favorite character actors (his love of Sam Peckinpah is quite obvious here).

Carrol Jo Hummer (Jan Michael Vincent) is a young Air Force vet who gets married (to Kay Lenz), gets a truck and gets out on the road to make a life for his new family. Unfortunately, Carrol Jo soon discovers the high cost of being an honest man in a very corrupt world. But, lucky for us, that sets in motion a lot of action scenes involving all sorts of trucks and Carrol Jo’s Remington pump shotgun. 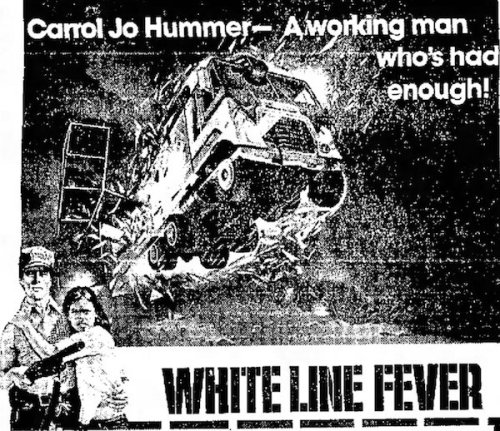 Growing up in the South in the 70s, White Line Fever was the talk of the playground in the sixth grade — everybody’d seen it over the summer break. It took me years to finally catch up with it (Jaws dominated that summer for me), and when I did, here were all these guys I knew from other movies — Slim Pickens, L.Q. Jones, R.G. Armstrong, Dick Miller. That remains its chief appeal for me today. Another thing — movies like this, which were sorta dismissed when they came out, sure seem good compared to what came later. I’d watch this 10 times before I’d watch something made in the last 10 years. 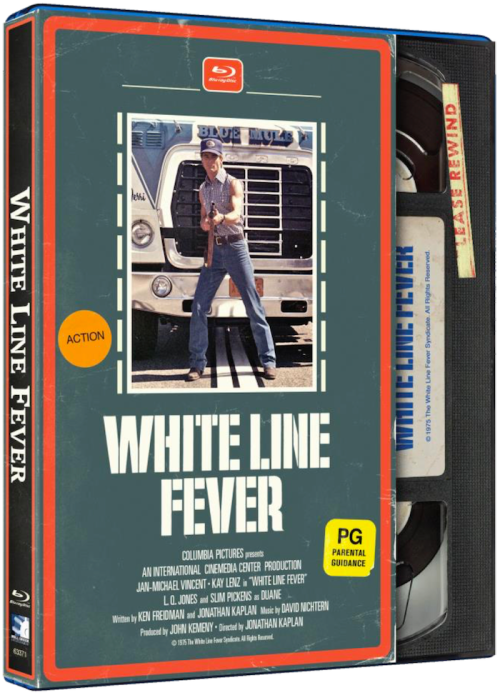 White Line Fever is now available from Mill Creek on Blu-Ray with a special sleeve that recycles the old VHS packaging. I worked my way through college at video stores (anybody remember Philadelphia’s Video Village?) and this box — complete with “Action,” PG rating and “Please Rewind” stickers — really took me back. But it’s what’s inside that counts, and this is a near-perfect transfer of a typical mid-70s action movie. You probably have a pretty good idea of what that looks like. There are no extras, just a pretty cool movie looking really good. And that’s plenty good enough for me.

Olive Films has announced their September release of their Signature Edition release of Roger Corman’s A Bucket Of Blood (1959).

Short in five days for something like $50,000, A Bucket Of Blood is an ink-black comedy starring Dick Miller as Walter Paisley. Paisley’s a bonehead who becomes a respected artist among all the hipsters with his piece “Dead Cat,” which happens to be, well, a dead cat. As his fame grows, so does his need for more art — and the bodies his creations require.

Olive is offering up a bucket-load of extras, beginning with a new 4K scan, a commentary, a few interviews, trailers and other goodies. This one’s essential, folks! 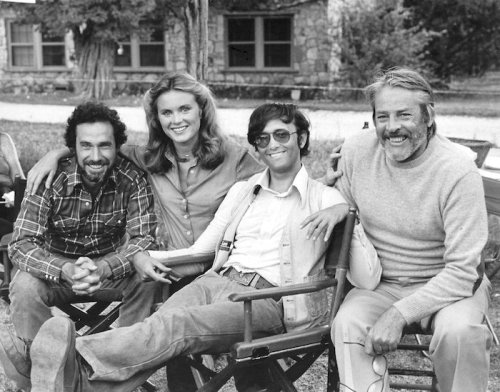 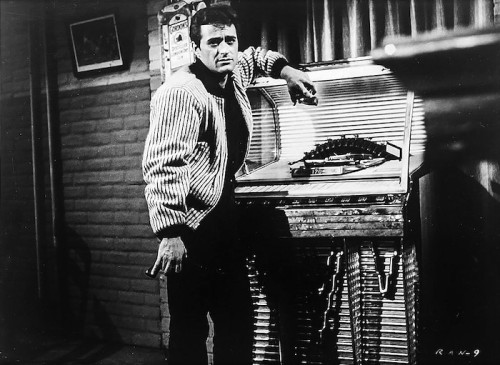 Dick Miller, one of my favorite character actors, has passed away at 90. In the early days, he was a member of Roger Corman’s stock company, and he continued to appear in pictures from Corman’s “student” directors like Joe Dante and Jonathan Kaplan. Dante used him in about everything he did.

Shout TV has a special event planned to celebrate the movie’s 40th anniversary — August 3 on Shout TV’s Twitch channel. To me, this is certainly a movie worth celebrating.

One of the prop piranhas by Phil Tippett. How cool is that?

Piranha‘s a real favorite, and I’d love to be there. This was one I never caught in the theater. 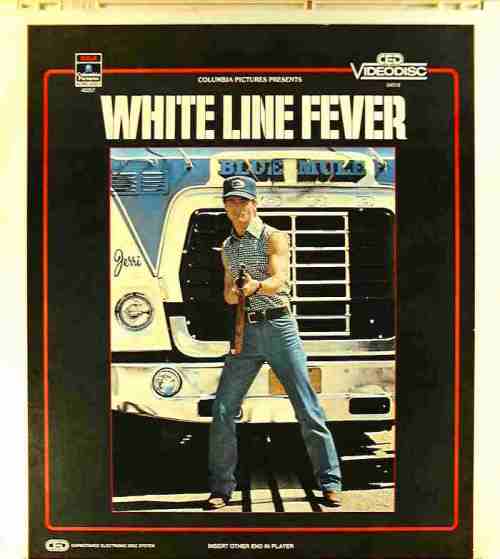 Growing up in the South in the 70s, White Line Fever (1975) was a very big deal. It seemed like every kid I knew was crazy about either White Line Fever or Jaws (1975) — or they hated their moms for not letting them see them.

Jonathan Kaplan was clearly (and admittedly) inspired by Sam Peckinpah here, and it shows, especially in the cast: Slim Pickens, L.Q. Jones and R.G. Armstrong. This thing was a huge hit, with every redneck kid in the fifth grade wanting a Ford cabover truck like Jan Michael Vincent’s Blue Mule.

Mill Creek’s bringing it to Blu-Ray as part of its Payback Time Triple Feature. The other two are Chuck Norris in Silent Rage (1982) and Blind Fury (1989) with Rutger Hauer. I worked in a few video stores in college back in the 80s. If I had a nickel for every time someone rented Silent Rage, I’d be trying to buy that Bullitt Mustang from the previous post.

The Hannibal 8
Create a free website or blog at WordPress.com.