Let’s not take for granted the fact that Blu-Ray technology has become prevalent enough that niche genre films like Hercules And The Captive Women (1963) are getting the kind of deluxe treatment usually given to pictures widely acknowledged as “classics.” As someone who seems to only watch movies that fall into some kind of goofy niche, I’m so thankful to the companies putting these things out.

That makes reviewing something like The Film Detective’s new Blu-Ray of Hercules And The Captive Women a bit odd, since I’m overjoyed by the thing before I even know what it looks like. With that out of the way, lets get to it.

Hercules And The Captive Women was released in Italy in 1961 as Ercole alla conquista di Atlantide, which translates to “Hercules At The Conquest Of Atlantis.” Shot in Technicolor and Technirama, it was Reg Park’s first time as Hercules. The picture played in the UK as Hercules Conquers Atlantis.

In 1963, The Woolner Bros. brought it to the States. They re-cut it, re-dubbed it, replaced the score, gave it the title Hercules And The Captive Women and opened it with new animated credits from Filmation. This is the version The Film Detective has brought to Blu-Ray, and it’s beautiful.

This time around, Hercules takes on Antinea, the Queen of Atlantis (Fay Spain), who’s planning on taking over the world with an army of odd-looking blond warriors. Along the way, there are all kinds of fights, plenty of posing and posturing and lots of crazy dialogue — you know, the stuff that makes these peplum movies what they are. 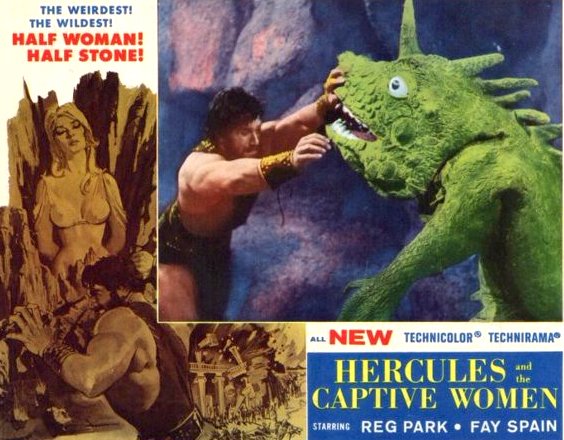 Hercules And The Captive Women one was one of my favorite peplums as a kid, thanks largely to the lizard monster Hercules (Reg Park) takes on. Fay Spain appeared in everything from Dragstrip Girl (1957) to The Godfather Part II (1974). I liked Park’s next one, Mario Bava’s Hercules In The Haunted World (1961), even better. This was probably the peak for peplum.

Thanks to the Technicolor and Technirama, Hercules And The Captive Women has a bigger, lusher feel than the rest of these things, which is where The Film Detective’s really pays off. The transfer — a 4K Restoration from the original 35mm camera negative — is as sharp as a tack. Sharpness and deep focus were the key benefits of Technirama, surely one of the best of the many film processes to turn up in the 50s. The audio here is, well, it is what it is. The dubbing and effects are as wonky as you remember, but quite a bit cleaner and clearer. You might recognize a music cue from Creature From The Black Lagoon (1954) — it’s also in Bend Of The River (1952) and King Kong Vs. Godzilla (1962).

There’s a mighty batch of extras: a commentary by Tim Lucas, a nice booklet with notes from C. Courtney Joyner, a documentary on peplums, Hercules And The Conquest Of Cinema, and MST3K’s take on the film. This is a really nice package. The Film Detective is a company to keep an eye on — they’re really on a roll these days. Highly recommended.